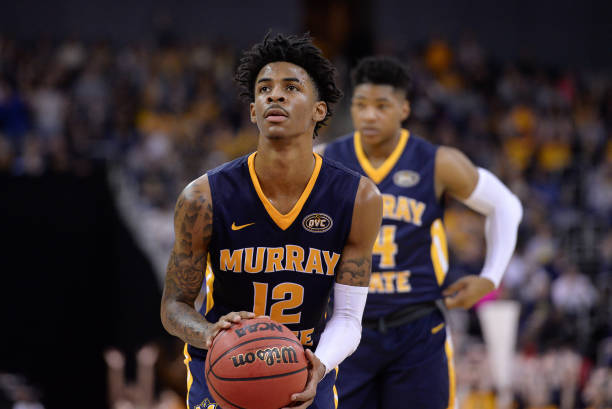 Murray State is ranked 12th in the West Region. They have won 11 straight games coming into the March Madness tournament, led by Ja Morant.

Temetrius Jamel Morant is a 6’3 guard from Dalzell, South Carolina. He’s just 19 years old and already has so much potential. This being his second season with Murray State, in his first season, Morant averaged 12.7 points, 6.5 rebounds and 6.3 assists per game. This season he has blossomed into the player that we were expecting him to be. He is a competitor; he wants to show out and win games. That’s exactly what he is proving this season with Murray State, leading them to the March Madness tournament with a 27-4 record.

Morant went to Crestwood High School, making history by becoming Crestwood’s all-time leading scorer with 1,679 points. He also set a career-high, scoring 56 points in a single game. As you can see, Morant has a lot of potential, and it’s going to be exciting to see him play in the NBA. In mock drafts, Morant is projected to be drafted by the Phoenix Suns. The Suns are in desperate need of a point guard, and if they can draft Morant to go along with Devin Booker and DeAndre Ayton, the Suns will have a very bright future.

If Morant can form a consistency in knocking down the three-point shot, he could have a very successful career in the NBA. His athleticism and play-making are there. I have confidence that Morant will also be a good defender in the NBA because of his length and his lateral movement, similar to Shai Gilgeous-Alexander.

Morant is already drawing comparisons to NBA Hall of Famer Allen Iverson, D’Angelo Russell, Damian Lillard, and he reminds me of De’Aaron Fox as well. Morant could be a special talent in the NBA very soon, but let’s first see how far he can lead Murray State in the March Madness.

In the Ohio Valley championship game, Murray State defeated the Belmont Bruins, 77-65, Ja Morant scored 36 points and added 7 rebounds. They are facing off against the Marquette Golden Eagles who are 24-9, in the first round of the March Madness.

Morant has averaged 24.6 PPG, on 50.3% shooting, 5.5 RPG, 10 APG, and 1.8 SPG. It’s no secret that Morant is special. But, it’s not going to be easy to defeat Marquette. Markus Howard is no scrub by any means. This will be a high scoring game, but I have Murray State upsetting Marquette because they have the best player on the basketball court in Ja Morant.