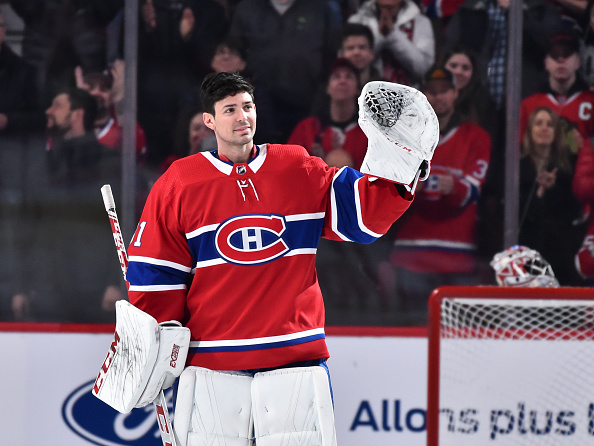 Carey Price notched his 315th win in a 3-1 victory against the Detroit Red Wings, making him the winningest goaltender in Canadiens franchise history, he collected 20 saves in the contest, which included a very nice pad save on Michael Rasmussen to keep it scoreless in the second period, as well as robbing Todd Bertuzzi on a crucial breakaway with twelve minutes remaining in the third, which kept them in the game. A native of Anahim Lake British Columbia, he was selected with the fifth overall pick in the 2005 NHL draft and has since become a true face of the franchise.

Price leapfrogged the record previously held by legend Jacques Plante since 1963. Price is first in games played with 616 and minutes played with 36,311, which is tops in team history. Among active goalies, he ranks seventh in games played, wins and saves. He is currently fourth in Canadiens history in shutouts with 43, three behind Ken Dryden, also trailing Plante’s 58 and franchise leader George Hainsworth who has 75 recorded shutouts.

This season he currently holds a 30-22-5 record with a .916 save percentage and a 2.54 GAA. Among active goalies, he ranks seventh in games played, wins and saves. The Montreal Canadiens are hanging around the final playoff spot in the East Conference, but it’s that time of the year where every game is close to a must-win. With 83 points at present, the Habs are currently just one point behind the Columbus Blue Jackets for that final wild card, with both teams having played 73 games.