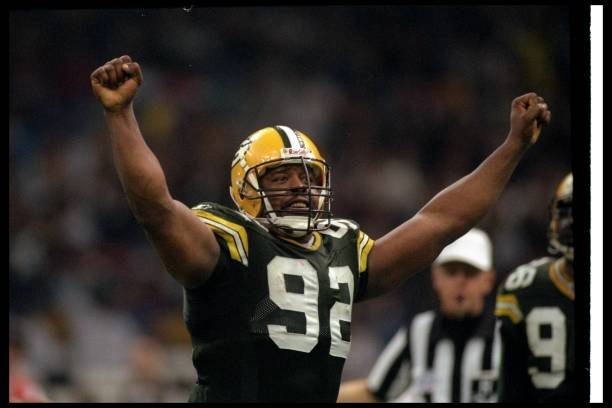 Modern Free Agency as we know it has only been around for 26 years, before Free Agency the NFL’s teams could protect their best players from free agency, basically restricting them from being actually “free”. Then in 1992, the NFLPA sued the NFL for that rule, the suit included four-time Pro Bowler Frank Minnifield, and many other marquee players. The NFLPA won the suit, thus doing away with the “restricted free agency” rule and thus changing the NFL forever. In this article, we will go over the top 5 Modern Free Agents. Thus, players like Johnny Unitas after he was cut from the Steelers and signed to the Baltimore Colts are not included.

5. Charles Woodson to the Packers

After the 2005 season, the disgruntled CB was only offered one contract. That was by the Green Bay Packers. The Packers gave him a second chance at playing after the Raiders no longer wanted him. The Packers were rewarded with more than they bargained for, Woodson would become the ’09 Defensive Player of the Year and would help bring the Lombardi Trophy back to the place where it began. In his seven seasons with the Packers, he recorded 38 Interceptions and was selected to the Pro Bowl four times.

4. Peyton Manning to the Broncos

After the 2011 season where Manning sat out an entire season after having multiple neck surgeries, the Colts decided to step away from the best player to ever dawn a Colts uniform, and select Andrew Luck with the first pick in the draft. This thrust Manning into free agency, where he ultimately signed with the Denver Broncos. In his first season with the Broncos, he led them to an AFC Championship Game where they lost to the Ravens, this was just the beginning for the Broncos and Peyton Manning, however. The next season he put up the greatest quarterback season ever, passing for nearly 5500 yards, 55 TD’s and 10 INT’s, but this historic season would fall short after being demolished by the Seahawks in the Super Bowl. After losing to his old team in the playoffs in 2014, he put up one last effort and helped the Broncos win Super Bowl 50. This signing remains the biggest QB signing in free agency history because of the impact it had on the NFL.

The 49ers in the ’90s were always stopped one step short of glory, and it was always by the same team, the Dallas Cowboys. So when the best DB in the NFL became a free agent in the 93′ offseason, the 49ers struck gold and gave him a one year contract. He would help lead the 49ers past the Cowboys and lead them to the Super Bowl where they crushed a helpless Chargers team that didn’t deserve to be there in the first place. In his only season with the 49ers, he earned Defensive Player of the Year honors and recorded eight interceptions, including two in the playoffs. He left after not being offered a contract and went to the Cowboys and helped them to a Super Bowl win over the Steelers.

2. Drew Brees to the Saints

After being a Charger for the first five years of his career, he was in the last game as a Charger when he dislocated his right shoulder and had to have career-saving surgery as he was becoming a free agent. This obviously took a toll on the market for him, as the Dolphins and Saints were the only teams that showed a genuine keen interest in signing him. He decided to sign with the Saints, and he wouldn’t regret it. He has been a Saint ever since, and has broken the all-time passing yards record and is on the way to breaking more significant passing records. He has also won a Super Bowl ring as a Saint, in 2009 against the Colts and Peyton Manning. He’s in his 40’s now so he must win another Super Bowl if he wants to cement his legacy as possibly the greatest free agent signing ever, but obviously he isn’t according to my list, but he could possibly pass the number one free agent signing ever if he breaks some records and wins another Super Bowl.

1. Reggie White to the Packers

Everyone knew this was coming, the first true big free agent signing ever decided to go north from Philadelphia to become a Packer. This wasn’t well thought of in the NFL community considering the Packers were just coming off a surprise playoff appearance. Reggie took on the challenge of taking a mediocre defense and making it a great one, which he certainly did. In seven seasons with the Packers, he recorded 68.5 sacks and was awarded 1998 Defensive Player of the Year. He also won a Super Bowl, where he very well could’ve been the MVP, as he sacked Drew Bledsoe three times and pressured him all day long into submission. He was a groundbreaker for free agency because people didn’t know if the process would work or not, and he proved it would.

That wraps things up, whether you agree or disagree with this article, the players that are included should be included but the order can be shuffled to ones liking. Hope you all enjoyed!