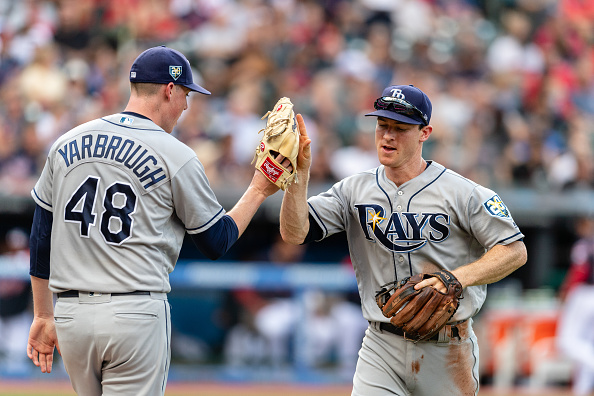 Everybody’s looking for an edge in their fantasy baseball leagues. You want the one thing that will take you from the middle of the pack to fantasy greatness. Well, over the years, I’ve found that streaming starting pitchers in-season is an effective way to help give you an edge in leagues with daily lineup changes. Eventually, though, I’ve found myself running into pitching limits, especially in ESPN leagues, where there is a starts limit of 200 in season. So what’s the best way to combat this? You have to attack how you plan to use your innings in the draft.

Get one ace (maybe two)

Let me preface this by saying that starting pitchers are a weakness for me, especially drafting them. In my early years, I would always focus on my hitting and take a stab at a pitcher here and there, hoping to catch lightning in a bottle. But in studying for drafts and doing the math, I’ve come to realize that getting those 200+ inning studs can give your team a massive anchor (positively) for your ratios as well as your wins and strikeouts. The problem is, they take up 30+ of your starts as well. So I would focus on one, maybe two guys early and then forget starting pitching for the rest of your draft. The only reason I would consider two is if you come up to the trade deadline with your starts limit set, you can ship one of those aces, or maybe even both, for big bats for your second half push.

Buy bulk innings without starts (or How I Learned to Yarbrough)

I’ve always had problems finding the best way to maximize my innings. It’s hard to find quality bulk innings from non-starters. Then, the reliever revolution occurred, and we started seeing guys like Andrew Miller, Brad Hand and last year’s reliever extraordinaire Josh Hader become multi-inning specialists who got a bunch of strikeouts and occasionally got the vulture win (or save). This year should be no different. While you have to pay for Josh Hader’s excellence (ESPN average draft position is 122.6), you don’t have to pay for Dellin Betances (237.2) or Ryan Pressly (259.9), two excellent late-inning relievers who could also snatch some save opportunities should their incumbents lose playing time for any reason.

Plus, last year we got another bonus. Tampa Bay started utilizing the opener, and the starter without starts was born. Ryan Yarbrough was the king of this type of pitcher, getting 16 wins and 128 strikeouts while only technically needing six starts to do so. One can see him getting the same kind of role again, and while you shouldn’t necessarily depend on him to repeat his success, following teams experimenting with an opener role and knowing who can serve in that bulk inning reliever can be valuable.

Save, save, save (all the saves)

There are nine pitcher slots on your standard ESPN roster. You should use one or two for an ace, and the other for a streamer spot. The other six or seven need to be stacked with relievers. Use every other spot here to cram as many saves as you can. Two, maybe three, spots should go to the bulk inning reliever or the high strikeout late inning guy. The rest should be used to get closers and get saves. Try to get guys with good skill sets, from your Edwin Diaz to your Sean Doolittle, but also don’t be afraid to go into the murky waters of the Cody Allen or the Ken Giles. And don’t forget late round options like Mychal Givens or Pedro Strop. Seriously, don’t leave your draft without Pedro Strop. The guy can pitch, and I’m not sure Brandon Morrow will pitch ten innings, much less get ten saves this year. Pedro Strop is a late round heist this year.

If your league uses an innings limit instead of a starts limit, then things change. The bulk innings relievers become less important, and the high K/9 setup guys become more important. I would almost make sure to get two high-inning, high K/9 starters early in the draft, to make sure to maximize your innings and get 400+ innings of high K/9 production. Otherwise, it’s the same deal. Burn and churn that last spot and don’t look back. Well, almost.

Now Mock It Out

Practice makes perfect. To get a feel of how you want to shape your team, mock drafts can be a valuable tool. Try several. Pick different aces in different spots and see how your top hitting picks shake out. Figure out where you’re most comfortable getting closers (or more accurately, what closers you’re most comfortable picking and where you should get them). Figure out the late game closers and hitters you can get to round out your team. It takes time and reps to lock in a solid drafting plan, and in this day and age, it’s easier than ever to mock draft and find that plan.

Don’t (be afraid to) fall in love

Streaming can be a double-edged sword. You might pick up a guy for a good start and recognize that’s all you’re using him for. Here today, gone tomorrow. But, and it’s a big but, if a pitcher really shows you something (for instance, a sudden uptick in velocity, or a noticeable bump in strikeout rate), and your gut’s telling you not to let this guy go, follow your gut. So many top-50 or even top-20 seasons from pitchers come from out of nowhere. You can pick up a waiver wire guy and, all of a sudden, he’s outperforming guys you’d never consider dropping. For some guys, it’s worth it to hold on for one more start, or maybe two, to see if there’s something there, especially if his next projected matchup is a cakewalk for whatever reason as well.

Pitching may not seem like it’s super deep this year, but the difference between the 40th starter and the 80th starter is not as much as you might think. For that reason, you need to get yourself set on top, build that bullpen Yankees style, and stream away on that last pitcher spot on your roster. This year, more than ever, it’s a streamer’s dream.