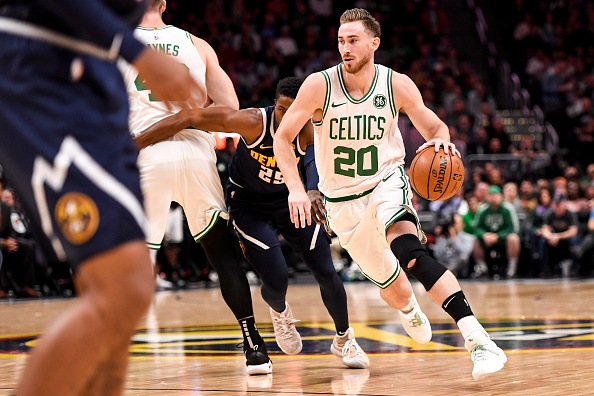 The Boston Celtics are coming off a great winning week, in which they went 3-0. Gordon Hayward showed some great signs so far on the team’s West coast trip.

Boston had been struggling prior to this week, let’s see if they can continue their great play on the rest of their West coast trip. They started last week off facing off against the most talented team in the league, although Klay Thompson was out for that game. The Celtics “showed up” as a team against Golden State, they moved the ball at a very high level which led to everyone getting good “looks”. Boston came into Oracle arena expected to lose due to their recent struggles, but the long plane ride to the game changed the Celtic’s team outlook. They blew out the Warriors 128-95! Boston once again showed that they are a “championship” team when they put one another first before worrying about their own “egos”. Hayward played amazing, he had 30 huge points off the bench, he couldn’t be stopped. Then on Wednesday, which was a back-to-back, Boston played the young and solid Sacramento Kings. Kyrie Irving sat out with a leg contusion, but the Celtics still took care of business, as Gordon Hayward had another big game by hitting a clutch leaning jump shot against Sacramento for the win after making a huge foul mistake. The Celtics defeated the Kings 111-109 in a tough back-to-back game on the road. The Celtics ended the week playing the Lakers in LA as it was LeBron vs Kyrie for the final time this season. Lakers have had their own struggles with team chemistry and injuries, and the Celtics were expected to come in and take care of business against the Lakers. They met expectations despite a triple-double from LeBron James, Celtics defeated the Lakers 120-103.

Will this Week Continue to Bring Winning?

The Boston Celtics are coming off a very successful week, that they were in desperate need of to turn their season around. Their upcoming schedule this week is still pretty tough, they will start the week off going up against the Los Angeles Clippers who play with heart and hustle. Patrick Beverley has been the Clippers “Motor” and Lou Williams has carried the scoring load. The Clippers currently sit at the #7th seed in the Western Conference. They weren’t expected to make the playoffs after trading away Tobias Harris who was having a career year, but they have still found a way to win games against elite level teams with their great defense and team play. Lou Williams is averaging 20.2 PPG, 5.4 APG and 3.0 RPG off the bench, then you have Danilo Gallinari who has had a solid year averaging 19.2 PPG, 2.4 APG and 6.0 RPG and is the second leading scorer on the team. At the center position off the bench is big man Montrezl Harrell who leads the team in FG percentage at 61.9%, he also leads the team in blocks at 1.3 per game. He has been solid defensively for the Clippers and has had a huge impact on the team’s success. This will not be an easy game for Boston because on the other end of the court stands Pat Beverley. He is a lockdown defender, a “dog”, and will try and get into your best player’s head to throw them off their game. Kyrie will get things done on Boston’s end, but he is definitely going to have to earn it. Al Horford will also have to step up as a veteran on the Celtics team. He will make the right plays by getting his teammates open and will have to play at his best on the defensive end against big men such as Montrezl Harrell and Ivica Zubac. I expect Boston to figure it out and get the victory against a solid and scrappy LA Clipper team because of their recent success and the great play of Hayward.

On Thursday night the Celtics will go up against the Sacramento Kings who have a great collection of talented young players starting with their Point Guard De’Aaron Fox. The Celtics just played the Kings last week and defeated them by 2 points as Gordon Hayward hit a huge game-winning contested jump shot on the road. The Kings will look to get “revenge” on the C’s as they play Boston on the road this time around instead of at home. The Celtics have looked great and should have Kyrie Irving back in the starting line up this time around when both teams face off. De’Aaron Fox has been balling all season long, but when he went up against Boston last week he had an “ok” game as he dropped 16 points, 7 assists, and 2 rebounds. He will look to bounce back and try to get his team the win at the TD Garden. Harrison Barnes led the way in points when these teams last faced off as he dropped 24 points and picked up 8 rebounds, but it wasn’t enough to beat Boston. Both teams will definitely be prepared to face one another. It should be a very entertaining game as the Kings look to get back at Boston. The Celtics, on the other hand, have been playing well and have been sacrificing the ball for one another. When they play “together” the Celtics are a very tough team to beat and will give you a lot of matchup problems. The Kings have a chance to make the playoffs. If they want to move up in the West this is a must-win game for them. I expect Boston to take care of business as they continue their great play, plus they are playing in front of the great Boston fans.

On Saturday night, the Celtics will be on the road facing off against a very young and talented Atlanta Hawks team. Trae Young has been playing very efficiently and at a high level as of late, his big-man teammate John Collins has also been playing “great”. The Hawks are obviously a non-playoff team who are in the “rebuilding process”. So far their young players are showing great signs and a whole lot of potential. Trae Young and John Collins have the “potential” to be one of the best duos in the league and possibly in NBA history one day. Trae Young is averaging 26.7 PPG, 9.1 APG and 4.9 RPG in the last 10 games, which is phenomenal but hasn’t always translated to wins quite yet. On the other hand, the Hawks athletic and talented frontcourt player John Collins has been playing “out of his mind” as well, averaging 21.6 PPG and 10.1 RPG in the last 10 games. On Saturday night against the Brooklyn Nets despite a loss, he dropped 33 points and grabbed 20 rebounds! The Celtics are the far-more-talented team of course but don’t count out the Hawks due to the fact that they have great, young and talented players that play with heart and a high level of intensity. I expect the Celtics to take care of business against the “rebuilding” Hawks in a blow out win with the way that they have been playing, and the reserves for Boston will most likely get to see some time on the floor.

The Celtics “look” like they are now on the same page as an entire unit, and they actually look like they are having “fun” being out there on the court together in the last 3 games. Kyrie, Tatum, Horford, Hayward and the rest of the players seem to actually have smiles on their faces as the team is 3-0 in the last three games. Hayward has stepped it up and played great in the last 3 games which have all translated to wins. Against Golden State, he dropped 30 points, gave out 4 assists and picked up 7 boards off the bench! Then against the Kings, he had a solid game dropping 12 points, got 5 assists, and picked up 3 rebounds, but most importantly hit the game-winning jump-shot. On Saturday night vs the Lakers, he had a solid game dropping 15 points off the bench in a 120-107 win over LA. The Celtics are still stuck to the #5 seed in the East but have a chance to move up to the 3rd or 4th seed due to the fact that the Pacers will begin to drop in the standings because their schedule is going to be very tough and they are without Victor Oladipo. Boston might or might not have home-court advantage in the NBA playoffs, but despite the level of difficulty to play on the road the Celtics not only have veterans with experience and championship pedigree on their team, but they also have a lot of talent and when the chemistry is at a high level. Believe it or not, the Celtics can definitely win games on the road and even come out of the East and are a legit threat to Golden State! I believe that the Celtics will continue their high-level play of basketball in this up-coming week and finish with an undefeated record of 3-0.