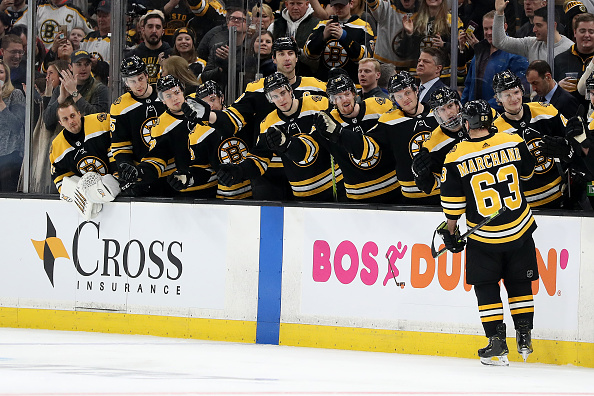 Welcome back everyone to a weekend edition of DraftKings Ice Picks. Hope everyone is having fun this season playing NHL DFS. The season is winding down and it will be soon time for the best time of the year for hockey fans, the Playoffs! As usual, my games to focus on is three or four matchups. Leading the way, Senators at Bruins, Red Wings at Lightning, Leafs at Oilers and Penguins at Blue Jackets. Let’s get to it!

It’s truly remarkable what the Bruins are doing right now, zero loses in regulation since the all-star break. Even with the latest injuries(Jake Debrusk, Marcus Johansson) on top of David Pastrnak being out, the Bruins are cementing themselves as a powerhouse. They have scored four goals six times and at least three goals eight times over their last 10 games. The visiting woeful Ottawa Senators come into town primed for a beat down, a 1-9 record over the last 10, seven of those games the Sens have surrendered at least four goals. Brad Marchand should skate circles around this inferior opponent, he has nine points in his last four games.

Seven points over the last five games for the massively talented Russian is actually pretty pedestrian. But here is why we roster him tonight-the Detroit Red Wings. The Wings come into this one stinking up the joint with just a single win in their last nine games, giving up 39 goals in the process. The Lightning should be ready for this one as they were upset by the visiting Wild 3-0 in their previous game. In two previous games this season the Lightning defeated the Wings 3-1 and 6-5.

The Leafs are obviously in a good spot facing the Oilers in what could be a fun high-flying game. The Oilers are surprisingly playing better of late winning their last four straight. Toronto dinged the Oilers in there only other meeting this year, February 27th to the tune of 6-2 at Scotia Bank Arena(want to say Air Canada Center). The Leafs continue to snipe goals at a nice clip. 3.5 per game over the last 10. Marner is heating up of late, he is the Leafs top performer over the last five games with three goals and eight assists.

Pittsburgh and Columbus tangle again, with playoff aspirations on the line, in what should be the game of the night. Pittsburgh has Columbus’ number this season beating them in all three games this season to the tune of 12-4. The Penguins are averaging 3.6 goals per game over the last 10 games, a little higher than their season-long average of 3.45 per game. Crosby has been a dominant force since the start of February. He is tied with Nikita Kucherov with 29 points in 17 games played(one less than Kucherov).

Although Heinen only has four assists over his last five games, it’s difficult not rostering as many Bruins players as possible tonight. Heinen gets top line minutes with two of the best players in the NHL in Brad Marchand and Patrice Bergeron. As well, Heinen gets first line powerplay minutes, all at a lower cost? sign me up.

Have the Leafs potentially found something in developing a fourth line for opponents to worry about? It may be a stretch but this line is hungry, energetic, fast and has the potential to contribute offensively. Tyler Ennis and Trevor Moore are at $3,200 or under and they are just as good or better then Petan, but Petan gets the edge because he is currently listed on the second line power play unit(monitor this situation, coach Babcock tinkers here quite a bit)*UPDATE-Tyler Ennis is listed on the second powerplay unit. Connor Brown takes Trevor Moore’s spot. Ennis is priced at $3,200 and gets the edge, unless you really need to save, in which case, go with Petan.*

Somehow somebody is actually clicking as a third piece to the top three forwards for Edmonton and it is from an unlikely source in Zack Kassian. The bruising forward has four goals in his last five games.

The revolving door of forwards playing on the first line alongside Sid and Jake Guentzel continues as now Dominik Simon will get a crack at adding to a great scoring line. Simon hasen’t been exactly lighting it up with just two assists in his last five games, but he does have 16 shots on goal all while playing mostly on the third line. Let’s hope that Simon gets in on what Crosby has be doing of late, also Simon will see time on the second power-play unit.