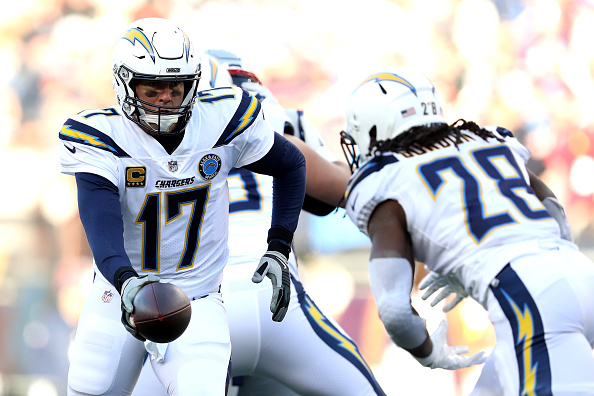 The Los Angeles Chargers finished last season with a 12-4 record. Injuries caught up to the Chargers yet again, Jason Verrett and Hunter Henry were both out during the regular season. Denzel Perryman went down mid-season, Brandon Mebane had terrible news. His newborn child passed away, which forced him to miss a few games, and that was completely understandable. But, the Chargers were able to find the next man up every time. Derwin James can easily be a franchise player; Chargers have great young talent to build on, including veterans who can lead them to a possible Super Bowl run, led by Philip Rivers.

The Chargers had some memorable wins last season against the Steelers in Pittsburgh and the Chiefs in Kansas City. In the AFC Wild Card game, LA traveled to East for a matchup against the Baltimore Ravens. The Chargers had lost to the Ravens week 16 in LA, 22-10. In Baltimore, the Chargers were focused on winning, they got off to an early start and took care of the Ravens 23-17.

The Chargers went to New England to face the Patriots in the AFC Divisional Round and were not able to keep up with the Patriots offense in the first half. In the second half, LA outscored New England, 21-6, which resulted in a 41-28 loss for the Chargers. It was a disappointing loss, but the Chargers did well throughout the season while fighting injuries.

The one thing LA needs to address in the offseason, besides getting fully healthy is to upgrade to the offensive line. Philip Rivers had absolutely no protection in the playoffs and for most of the regular season. If they can get Rivers some protection, the Chargers will be a tough team to beat come playoff time. Mike Pouncey did a great job last season, as for the rest of them, they need to either improve or get replaced. The outcome of the Divisional Round would have been entirely different if they had given Rivers 2-3 more seconds to throw the ball. Antonio Gates will likely return next season, in pursuit of a Super Bowl run. He said that this team has the talent to win it all and that’s why he wants to return next season to be a part of something special.

Anthony Lynn is a good coach. He keeps the players focused on the game at all times and doesn’t let a win distract them from the big picture. He was also integral in keeping the “next man up” mentality for the team as injuries piled up. Philip Rivers is the most underappreciated and one of the most underrated quarterbacks of all time, and if anyone deserves a Super Bowl championship, it’s Philip Rivers.

The Chargers have a good team overall. Offensively and defensively, led by Philip Rivers, Melvin Gordon, Keenan Allen, Joey Bosa, Derwin James, and Melvin Ingram III. The Chargers main focus needs to be improving the offensive line, getting Hunter Henry and Denzel Perryman back to full health, and sign a FA safety.

Derwin James and Melvin Ingram III were regularly speaking with and taking pictures with Jalen Ramsey at the Pro Bowl. Ramsey had another stellar year with the Jaguars racking up 65 tackles, 13 passes defended, and 3 INTs. If the Chargers somehow trade for Jalen Ramsey, the defense would be almost unstoppable. Tyrann Mathieu and Keenan Allen are good friends, Allen may look to recruit Mathieu who had a career-high 89 tackles along with 3 sacks and 2 INTs. It will be an exciting free agency this offseason. The Chargers are not known to get big names in the free agency, but this season could be different.

They also have Jatavis Brown and All-Pro Adrian Phillips who were 2nd and 3rd on the team in tackles with 97 and 94 respectively. Getting to the quarterback is an area that the Chargers can certainly improve. They totaled 38 sacks last year. Melvin Ingram led the team with 7. Part of the lack of pressure was also due to not having Joey Bosa on the field for most of the season as he only played in 7 games. They truly need to improve the pass rush of the front four if they want to take the next step defensively.

Parting-ways with Tyrell Williams will give Mike Williams a much bigger opportunity to flourish and build on last season’s success. Williams had somewhat of a breakout year finishing 3rd on the team in receptions (43) and leading the team with 10 receiving TDs. The Chargers have a lot of talented young players, mixed with talented veterans, all they are missing is an improved offensive line, one more piece to the defense, and for the team to remain healthy.

In the 2019 NFL Draft, the Chargers should look to draft an OL. Right now, they are looking to draft DT, Clemson product, Dexter Lawrence to pair with Melvin Ingram III and Joey Bosa.

My expectations for the Chargers this season is to make it to the Super Bowl and win it all. It’s time for Rivers and Gates to win a championship. They will do so if they sign a safety or trade for Jalen Ramsey, improve the offensive line, and remain healthy.