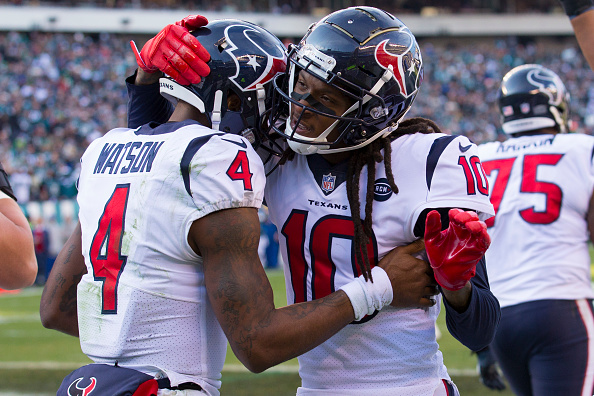 With about a minute left in overtime, Colts head coach Frank Reich decided to go for it on fourth down instead of punting the ball and playing for the tie. The Colts didn’t convert and the Texans won a game with a winning field goal shortly after. That overtime win kicked off a nine-game winning streak. The Texans finished the season winning 11 out of their final 13 games and ended with an 11-5 record, winning the AFC South title. Unfortunately, the season ended with a 21-7 defeat to the Colts in the wild-card round of the playoffs.

Coming off his second torn ACL injury in his life, Watson bounced back throwing for 26 touchdowns, adding five more on the ground while playing all 16 games. DeAndre Hopkins made First-Team All-Pro for the second season in a row, but even more impressively he didn’t drop a single pass this year despite finishing third in the league with 115 catches. Not only did Watson bounce back in 2018 from a serious injury, but so did three-time NFL defensive player of the year J.J. Watt.

Watt played in all 16 games for the first time since 2015 after dealing with injuries the past few seasons. He led the league in forced fumbles with seven and finished second with 16 sacks. Watt was named First-Team All-Pro and selected for the pro bowl for the fifth time in his career. In all, six Texan players made the pro bowl this year: Watson, Hopkins, Watt, Jadeveon Clowney, Benardrick McKinney, and Lamar Miller.

Despite having a good season and playing all 16 games, Watson took a beating throughout the season. The Texans lead the league in sacks given up with 62. Watson was hit so many times this season he spent part of the season traveling to games on a bus because he had bad enough lung and rib injuries that he couldn’t travel by plane. The Texans must improve their offensive line this offseason before Watson suffers a career-threatening injury.

Watson’s injury wasn’t the only one the Texans dealt with on offense. Starting wide receiver Will Fuller has struggled to stay healthy throughout his career and just when he was starting to play well, he tore his ACL; playing in only seven games this season. The Texans then traded a fourth-round pick to the Denver Broncos for Demaryius Thomas and a seventh-round pick right before the trade deadline. Unfortunately, Thomas struggled during his seven-game stint with the Texans and tore his Achilles week 16 verse the Philadelphia Eagles, ending his season.

Earlier in the offseason, the Texans released Thomas, saving them $14 million dollars against the cap. According to over the cap, the Texans are projected to have about $74 million dollars in cap space before making cuts. Clearly, the Texans don’t need to open up cap space but some players who could be at risk for being cut are Miller ($6 million saved) and Johnathan Joseph ($4.3 million). However, neither player is expected to be released unless the team upgrades at their positions.

The Texans have several players that are upcoming free agents, including a few starters. Clowney was already slapped with the franchise tag worth $15.4 million dollars. The players the Texans should consider re-signing are defensive backs Kareem Jackson and Tyrann Mathieu, defensive lineman Brandon Dunn and Christian Covington and kicker Ka’imi Fairbairn. Of the group, Mathieu and Jackson are the most critical for the Texans to bring back as the secondary needs to be improved this offseason and losing those two would only make it worse.

With all the cap space, I expect the Texans to be aggressive in free agency and they need to be, even if it means overpaying for some players in order to put a better team around Watson. Without several holes to fill the team can plug most, if not all, of them before the draft. Here is a list of free agents the Texans should take a look at.

Outside of the Antonio Brown circus, the biggest question this offseason is where will Bell sign and the Texans would be an excellent landing spot. In Pittsburgh, Bell had Brown on the outside and Ben Roethlisberger at quarterback, replacing them with Hopkins and Watson wouldn’t be a drop-off. Bell is probably the only free agent running the Texans can sign that would result in Miller be released.

Hopkins is one of the best, if not the best, receivers in the league. However, the Texans can no longer rely on Fuller to stay healthy and even promising rookie Keke Coutee struggled with injuries last season. Bringing in at least one veteran receiver is a must this offseason. Tate and Humphries would give Watson a reliable slot receiver upgrade over Coutee. While adding Crabtree would give Watson another red zone weapon, besides Hopkins, on a cheap deal.

Other than starting right guard Zach Fulton, every other spot on the offensive line could be upgraded this offseason. Last year the Texans almost landed former New England Patriots’ left tackle Nate Solder in free agency, could they try that route again and sign Brown? Williams played in just one game for the Carolina Panthers this past season but he might be the best right tackle on the market. Morse was teammates with Fulton last year in Kansas City and bringing him in would eliminate a lot of the pressure Watson got in his face from last season.

If the Texans don’t re-sign Dunn or Covington they will need to add a big body up front. Jernigan had his option declined by the Eagles as they are tight for cap space. While Suh had a nice year with the Los Angeles Rams, he will likely seek a bigger contract than they can afford. It would be better for the Texans to re-sign their own guys but if they don’t, Jernigan and Suh would be big price upgrades.

Starting outside linebackers Whitney Mercilus and Clowney are two of the best in the league but the depth behind them is inexperienced. In today’s NFL, you can never have too many pass rushers, but the Texans can’t afford to add an expensive third guy. Instead, targeting cheaper veterans who are at the end of their career is the better option. Both Wake and Matthews aren’t expected to re-sign with their current teams and could welcome playing fewer snaps and staying healthy while playing behind Mercilus and Clowney.

Other than the offensive line, the cornerback position is the Texans’ biggest hole they need to fill this offseason. Unfortunately, the free agency market is limited with starting-caliber cornerbacks, making this a need they must fill in the draft. However, one name they could take a look at is Darby. He tore his ACL early last season but should be ready for offseason workouts. Darby is the top cornerback on the market and the Texans have regretted letting A.J. Bouye leave as a free agent a few years ago.

Thanks to the trade the Texans made with the Seattle Seahawks during the 2017 trade deadline for Duane Brown, the Texans have an extra second-round pick and four total picks in the top 100 selections. Everyone wants to know what players the Texans should take with their picks, but I don’t want to give player names because we still have a little under two months of evaluating to do before the draft. Also, free agency and trades will have an impact on how the team drafts so take these suggestions lightly.

Even if the Texans sign two veterans in free agency, the offensive line needs more help. With their pick late in the first round, they will have plenty of choices at an offensive tackle or interior guy to select from. Either way, they need to add one. Watson’s 62 sacks easily lead the league and protecting their franchise quarterback is the top priority this offseason.

Besides offensive linemen, the Texans need to spend an early pick on a cornerback. While the top of this draft class lacks elite prospects at cornerback, the depth is pretty good. If the Texans keep Joseph or add Darby, this rookie wouldn’t have to start this season. If the Texans let Joseph go, the cornerback spot may become their biggest need. With Andrew Luck in the division, you can never have too many cornerbacks.

Even though the Texans spent two draft picks on tight ends last year, they should look to draft another this year. This class is much better and deeper than last year’s class and the Texans should give Watson as many weapons as possible. The Texans spent a third and sixth round picks on Jordan Akins and Jordan Thomas last year but neither showed enough as a rookie to keep them from drafting a tight end again this year.

The 2018 season ended with a first-round exit in the playoffs, but the franchise is heading into the right direction. With plenty of cap space and extra draft capital, there should be high hopes for the Texans in 2019. Every franchise and fan base wants to contend for the Super Bowl every year but that’s not a realistic goal for the Texans. Instead, if the Texans can win the AFC South for the third time in four years and make it to the second round of the playoffs, the fan base should be happy with the season, knowing the future is bright.