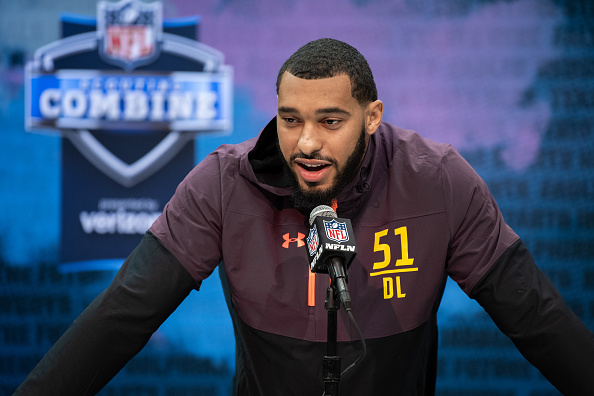 The NFL combine has officially wrapped up with the defensive backs finishing their workouts Monday. Several players impressed with their workouts and 40 times but at the same time, some players underwhelmed with some numbers and drills.

Defense is the best part of this year’s NFL draft. Everyone knows that, but a lot of these players are blowing expectations out of the water. Players are running blazing fast 40 times, they are putting up massive reps on the bench, and some are measuring out quite well.

Lots to dive into so let us not waste any more time.

Sweat dominated the Senior Bowl practices back in January and was the talk of that whole week, well he may have stolen the show in Indianapolis as well. Sweat ran a 4.41 40 yard dash and has cemented himself as a potential top ten pick come April. He has great open field speed as his time has shown but his speed off the edge is elite and in a class full of great pass rushing talent he is really starting to work his way up my rankings and NFL teams boards after this weekend.

Kendall is, unfortunately, a loser coming out of the Combine due to an injury he had when doing the bench press workout. It is reported by Ian Rapoport that he has suffered a torn pectoral muscle and will require surgery. Last year top center prospect Billy Price suffered the same injury during the same workout but he was still a first round pick, Sheffield will still probably be a day two pick so he shouldn’t drop too much from this. What is bad for him is a lot of people expected a strong 40 time that could have maybe boosted him to the end of round one.

Williams cemented himself as the top cornerback in his draft answering the last question people had with him which was can he run with his size being what it is? He ran a 4.37 today in the 40-yard dash so yeah he can kinda run. With his length and size paired with his great speed, he could very well be a top end pick in the first round of this loaded defensive draft.

The injury bug also nabbed someone else this year at the combine as Dexter Lawrence ran his 40-yard dash he pulled his hamstring but he still ran a 5.05 which was impressive given the injury he suffered. He should be rested up by the Clemson Pro Day so he can do all the tests teams wanted him to do at the Combine. While coming out behind everyone else in the pack of defensive linemen he will at least have a chance to showcase his ability before April.

Bush came in at a perfect size of 5’11” and 234 pounds and then blew everyone away with a 4.43 40-yard dash time, a 40.5” vertical and then a 10’ broad jump. Those are fantastic testing numbers and have blown people away, so much so I have seen him being in the talk as the top linebacker beating out LSU product Devin White.