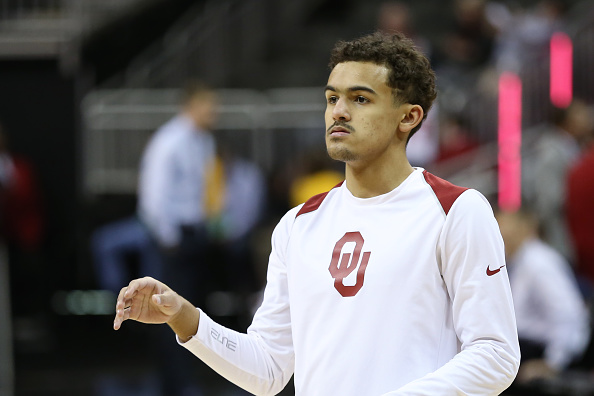 Although early impressions of the 2019 rookie class suggest that it is one of the strongest and deepest in recent memory, the latest crop to enter the NBA will be defined by two players who will be compared meticulously throughout their careers. Ever since the night of the 2018 draft, Trae Young and Luka Doncic were destined to be intrinsically linked.

On the surface, the pair’s journeys to the pros could not be more different. Point guard Young took the now-traditional route to the league, leaving college after a single, rollercoaster season at the University of Oklahoma, where he initially was unstoppable before somewhat crumbling when the hype surrounding him burgeoned. Across the Atlantic, the Slovenian Doncic caught the attention of the world through his historic exploits with Real Madrid in the EuroLeague, epitomizing the NBA’s international future. If Young was the most polarising prospect, Doncic was the most mysterious.

Since they were the two most scrutinized players heading into the draft, it was fitting that the then-teenagers dominated the headlines on the night that they entered the league. Doncic was taken with the third pick by the Atlanta Hawks, but was instantly traded to the Dallas Mavericks for the rights to Young, the fifth pick. In one swift and stunning transaction, the seeds of the basketball’s newest individual rivalry were sown but, much like a budding plant, evidence of development was initially hidden from plain sight.

For a while, it appeared that there would be no rivalry at all, as Young and Doncic’s careers continued to move in contrasting directions. Young, as small rookie guards tend to in the NBA, looked overwhelmed by the league’s physicality, was a major defensive liability and, at the turn of the calendar year, his shooting and turnover statistics were very, very, ugly. For many, he looked more like a bust than the next Steph Curry.

The point guard’s difficulties adjusting to the league were compounded by events in Texas, as Doncic made the smoothest of transitions from playing in Europe. The 6’6″ playmaker dazzled Dallas with his transcendent passing, carefree personality and a step-back three that is fast becoming iconic. Back in December, with Luka fever at its peak and the Houston Rockets in town, he put on a captivating fourth-quarter show to snatch victory from the Mavs’ Lone Star rivals. Performances like this ensured that the talk at the turn of the year around Doncic was not if he was Rookie of the Year, it was whether he should be an All-Star. At this stage, the consensus was that Dallas had pulled off one of the great draft night trades at the Hawks’ expense.

Fast forward a couple of months, and that point of view is looking more shaky by the game. Doncic has continued to have an all-time great season; only five other rookies have averaged at least 20 points, seven rebounds and five assists per game. Moreover, of all the players this short list, which includes some of the games greatest ever players (and Tyreke Evans), Doncic is the second-youngest, behind LeBron James.

Yet while Luka has been playing like one of the best rookies ever this season, Trae Young has been one of the best players in the league over the past month. In his last ten games, Young has shown hints of living up to that ‘next Curry’ tag that was hastily given to him; cracking the top 15 in points per game, top 10 in three-pointers made and top five in assists per game. He’ll need a herculean effort over the final few weeks of the season to challenge Doncic for Rookie of the Year but, in what is admittedly a small sample size, the fact that Young has made this award any sort of contest is a testament to his incredible recent play.

And even though Luka looks set to draw first blood, the war between the duo is only beginning. Of course, there is no personal feud between them, but everything Young does on the court throughout his career will be measured against Doncic, and vice-versa. They have both shown MVP potential over their rookie seasons and with the history that already exists between them, constant comparison will be irresistible.

Young and Doncic are not Magic and Bird, just as the Hawks and the Mavericks do not share the animosity of the Lakers and the Celtics. Nevertheless, the fact that they have already been traded for one another sets up the possibility of a unique rivalry that will divide the basketball world, and could provide one the NBA’s greatest ever what-ifs. It is far too early to predict a Finals match-up between Young’s Hawks and Doncic’s Mavericks, but the prospect alone is fascinating and something worth rooting for.

Despite the growing rivalry, everyone should appreciate both through the attributes that they share. With their otherworldly vision and ability to shoot from well behind the arc, they each possess the ideal skillsets for the modern NBA, and are poised to lead franchises with very bright futures. They have also answered those who doubted their abilities for various reasons; Young was criticized for his inconsistency and diminutive figure, and Doncic was the victim of the slightly jingoistic view that European basketball gave no indication of a player’s NBA caliber. For all their differences, the two have plenty in common.

It is difficult to talk about young talent without reference to a third name dominating the headlines as a teenager. Zion Williamson is coming soon, and he will challenge Young and Doncic for the title of the defining player of the next generation, either as an opponent or, if the lottery decides to spring a surprise, as a team-mate. But the Duke superstar will have to wait. For now, NBA fans should simply sit back and enjoy the exploits of Luka Doncic and Trae Young, as the latter seeks to continue his incredible run of form and steal the Rookie of the Year award from the former, whose unprecedented campaign seemed to have sealed him the trophy months ago. It won’t be the last battle between them.