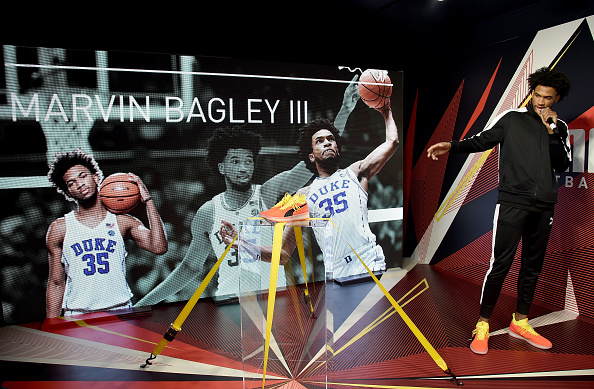 The final stretch of the season has begun! There is still a lot of basketball to be played this season and the Rookie of the Year race is far from over. Luka Doncic has been at the forefront of that conversation for most of the season but over the last couple of weeks we have seen Marvin Bagley III, and others, come to life.

This edition of the rookie report will be a two-part series to account for the few games just after the All-Star break and leading into the first full week of NBA action. Let’s dive into Part 1…

MARVIN BAGLEY III at GOLDEN STATE
Bagley has been playing some inspired basketball for the last few weeks setting his highest single-game scoring totals in this month. I covered those performances in the first Rookie Report of February and you can find that here.

On Thursday against the Warriors, Bagley continued to impress as he made his way to 28 points and 14 rebounds. Unfortunately, it was not enough as the Sacramento Kings would fall to Golden State 125-123. With this loss, Sacramento is 0-4 against Golden State with those losses coming by a combined 12 points.

Bagley struggled early in the first quarter while being guarded by Kevin Durant. On consecutive touches, Bagley caught the ball while in the post but failed to shield Durant away from the ball resulting in turnovers. In the second quarter, Bagley would have two more possessions ending the way. On the Kings final possession of the first half, Bagley would once again get the ball in the post while guarded by Durant. Bagley made the adjustment this time, was able to avoid turning the ball over and draw a foul. After the play, Durant gave Bagley a pat on the chest. This in-game growth will allow Bagley to become even better in the post.

While Kevin Durant was able to cause problems for Bagley, the other Warriors did not have the same success. Defensive anchor Draymond Green would struggle to guard the rookie in the second quarter, giving up 6 points to the rookie in the opening minutes of the quarter. Marvin Bagley III’s scoring output would help push the Sacramento lead to 11 points.

Bagley would finish the first half with 15 points and Sacramento’s physical defense allowed them to create 11 turnovers resulting in 15 points-off for the Kings.

The second half was much closer as the Warriors were starting to make their three’s, while Sacramento struggled mightily from distance. Fouls by Sacramento allowed Golden State to work their way back into the game. Marvin Bagley III brought an energy to this game that permeated through the Kings’ roster on both ends of the floor.

Overall, Bagley III played very well. Moving forward I would like to see him become more involved on defense by jumping passing lanes and by using his long arms to block shots. His length and athleticism serve him well for guarding multiple positions.

MARVIN BAGLEY III at OKLAHOMA CITY
Marvin Bagley III followed up an impressive performance against Golden State with a double-double and impressive defensive display against the Oklahoma City Thunder. MB3 would go for 19 points on 8-of-18 shooting (0-of-2 from three) and 3-of-6 from the free-throw line. Bagley III also grabbed 10 rebounds and tacked on 2 steals and 3 blocks on the other end.

The Kings have found a go-to guy in Marvin Bagley III. His scoring prowess in recent weeks has given them the lift they were missing, and he has separated himself as a clear second option behind Buddy Hield.

Bagley III’s ability to run the floor is perfect for their style of play. His willingness to push the ball up the floor after grabbing defensive rebounds is an added advantage for a team that wants to get up and down the floor quickly.

Against the Thunder, Bagley III’s ability to score and run the floor helped Sacramento build a 14 point lead going into half time. There were several instances where he grabbed the defensive board and immediately started dribbling up the floor before making the pass. That awareness and ability to keep the defense on its heels not only opens up the floor for his teammates but for Bagley III as well.

One area where MB3 struggled Saturday was scoring around the rim. He had several scoring chances on the fast-break where he shied away from contact at the rim. Moving forward he needs to go up strong and be ready to draw contact. Adding that dimension to his game will make the rookie even more dynamic on offense. He shoots the ball well, can score in the post, and has shown that he can get himself open looks but if he can become a deadly free-throw shooter it will make him that much more difficult to guard.

Marvin Bagley III would follow up his performances against Golden State and OKC with a 25-point, 11-rebound double-double against Minnesota.

Wednesday against the Milwaukee Bucks Bagley III would suffer a knee-sprain. Thursday the second pick in the 2018 draft would have an MRI and it was determined that he could miss 1-2 weeks. Missing time this late in the season will likely keep him from making a more serious Rookie of the Year push.