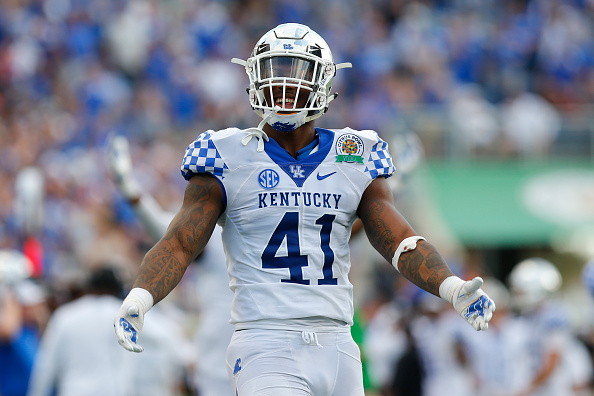 Another historic NFL season is in the books. The New England Patriots outlasted everyone for its 6th title in nearly two decades. Now the tables will turn to the rapidly growing popularity of the offseason. The combine, free agency, and everything that has to do with the draft will take center stage from here on out. This is my initial first-round mock of the new year from thescorecrow.com. I hope you enjoy and please feel free to let the arguments flow!

Allen can be the prototype for Kliff Kingsbury‘s new 3-4 defense, even though the Cards know they must get Josh Rosen weapons.

The 49ers sprint to the podium for arguably the best player in the draft that falls conveniently in their laps.

The Jets need offense to supplement Sam Darnold desperately, but can’t pass up on a defender like Williams in this spot.

Gary will get the spotlight to replace Khalil Mack, which is way easier said than done for the top high school recruit who underachieved at Michigan.

The Bengals have to find ways to retool their porous defense and White is the leader they can do it with.

Eli Manning has at least one quality year left in him, so they go protect him by continuing the offensive line shuffling.

Haskins will get the nod to bring the Jags back into contention unless Nick Foles gets dealt here.

Matt Patricia lands one of the edge rushers he’s got to get for his defense.

Buffalo has to select all the offensive prospects it can to help Josh Allen progress in year 2.

The Bucs trade down to secure the cornerback they want to improve their abysmal defensive backfield.

Risk taker, Daniel Snyder, can’t pass on the most polarizing figure in the draft to take over as his signal caller for Alex Smith.

Miami seems to be all in on the 2020 QB class, so they look elsewhere in the first round.

This is a good landing-place for Bush who will bring his speed and skills to a defense that has to keep up with the other offenses in the NFC South.

Green Bay adds some serious pass rush from one of the fastest defenders off the line of scrimmage.

The Panthers need players on both sides of the line so they could go either way with this selection.

Going into the 2018 season Oliver was the #1 prospect, now he slides to a trendy team picked to win the AFC North in 2019.

A club on the rise chooses a pesky corner to continue their path to towards Super Bowl contention.

Wilkins can bring an interior presence to the Titans already stout defense.

Ford is shooting up the draft boards, but if the Chargers can snag him here it’s quite a coup for Philip Rivers and company.

His physicality would be a perfect fit in the reloading Seattle defense.

The Ravens give Lamar Jackson a receiver he can grow with over the years.

Houston selects a left tackle they have to find in this draft to protect the promising road ahead for Deshaun Watson.

Bill Belichick actually deal up for Tom Brady‘s next security blanket, and possibly the next Rob Gronkowski.

Kirk Cousins doesn’t appear to be what the Vikings expected him to be and because of it they decide on a protection plan for him.

Adderley was coached by Gruden at the Senior Bowl and has the family NFL pedigree in Pro Football Hall of Famer Herb Adderley.

Pratt possesses safety type speed at linebacker which is what Pittsburgh has been seeking since the devastating injury to Ryan Shazier.

Thompson can learn from a veteran like Eric Berry to be a constant in Kansas City for a long time to come.

Aaron Rodgers is not going to be around forever so the Packers can let Lock study the brain of Rodgers until he’s ready to take over.

If Burns somehow falls this far, it has to be considered a major steal for the NFC Champions who will be looking for more sack artists.

Brown would be a nice slot complement for Carson Wentz if they let Golden Tate walk away.