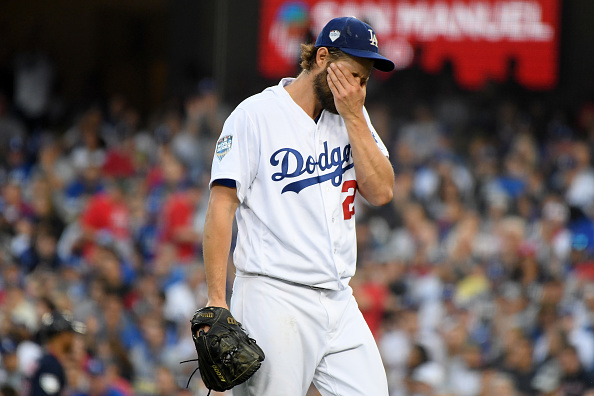 Is it the Beginning of the End for Clayton Kershaw?

It’s been a rocky year for Clayton Kershaw. He had two separate stints on the disabled list in 2018, but the history of his injuries didn’t start last year, rather in 2016. In June of 2016, Clayton Kershaw was placed on the 15-day disabled list because of back pain. He received an MRI which revealed a herniated disk in his back. He received an epidural injection, which injects medicine into the epidural space around the spinal cord and provides temporary, or sometimes long-term, healing from the pain or inflammation surrounding the spine. He was named to the All-Star team but didn’t play because of his history. Then in July, the Dodgers ruled Kershaw out for an extended period of time. After pitching a simulated game, he still felt the pain in his back. In early August, he was moved to the 60-day disabled list, before he returned to the starting rotation in early September. Despite dealing with this injury, Kershaw still managed to go 12-4 with a 1.69 ERA and only walked 11 batters all year. Fast forward to July 2017. Clayton Kershaw is placed on the 10-day disabled list for “back tightness” and ends up missing more than a month. He joined the team in September and finished out the season. Once again, he had a great season, finishing 18-4 with a 2.31 ERA and striking out 10.5 batters per nine innings.

Kershaw started on opening day in 2018 and lost the game 1-0. This was his first opening day loss, but it wasn’t his fault considering they lost due to lack of run support. This is beyond the point. On May 6th, Kershaw was placed on the disabled list due to tendinitis in his left bicep. He rejoined the team at the end of May, only to be placed right back on the disabled list. He left his first start since returning from the DL with chronic back pain. He rejoined the team permanently on June 23rd, but he was not the same Clayton Kershaw as he was in the past. Kershaw finished with his lowest win total since 2009 with only nine wins. He also pitched to the highest ERA since 2010. Despite being his highest since then, Kershaw still had a very respectable 2.73 ERA. He also struggled striking people out, recording the lowest amount of strikeouts since his rookie year in 2008. This number was 155 and he averaged 8.6 strikeouts per nine innings. For most pitchers, this is a good season, but for Clayton Kershaw, this is a concerning sight.

After coming back from injury in June, Kershaw’s fastball was significantly slower than it had been in the past. Normally, his fastball averages out at between 93-95 miles per hour. Last year, there were games where he wouldn’t even hit 90. As a spectator, his fastballs looked very hittable as they didn’t really have any movement to make them deceiving. I’m surprised he had as good as a season as he did because as I said, his pitches looked very hittable since coming back. Usually, when someone’s fastball slows down, it’s a sign of aging, but Kershaw will be 31 when the season starts, which isn’t old enough to be showing this much regression in fastball speed. Now, here we are in Spring Training of 2019. There are reports of Kershaw having minor left shoulder inflammation. He is still slated to start Opening Day against the Diamondbacks, but this is just another minor setback for Kershaw that could affect him in the future. As a baseball fan, it would be very sad to see Kershaw slowing down at a younger age than most. This is what injuries can do to you.

So, let me ask you, the people: is Clayton Kershaw slowing down? I expect this season to be more troubling than last year for Kershaw. All the combined issues that he’s dealt with from the shoulder inflammation to the back pain and the bicep tendinitis can have serious effects on a pitcher. I don’t see Kershaw improving at all if he can’t get some speed back on his fastball. Hitters will figure him out if he becomes a predominantly breaking ball pitcher, as well. There’s no good median here for Kershaw. He’s going to have to overwork himself to become as dominant as he was in 2017, and at this point in his career, with all he’s dealt with, I don’t see how he improves on last season. I’m not saying that Kershaw will become so bad that he won’t make the rotation in a few years because that’s just pretty much impossible. The only thing that can force him out of baseball is reoccurring injuries. If he stays healthy, he will continue to be a good starter for the next few years. But Kershaw was not good in the past. He was the best. He was dominant. He was the most valuable pitcher in the league. He wasn’t anywhere near that last year. Unfortunately for most baseball fans, this looks as if it could be the beginning of the end of Clayton Kershaw’s dominance.