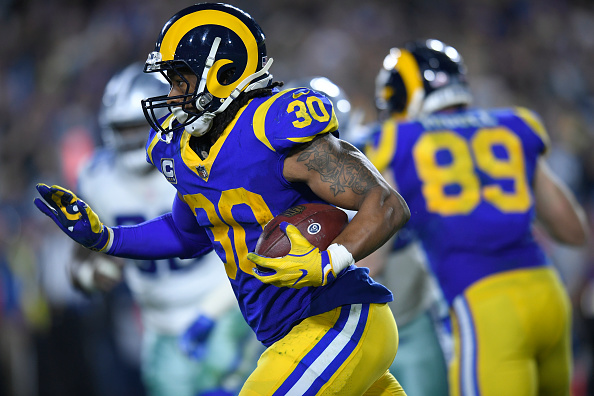 The Los Angeles Rams have had quite the season. Just a year ago they had their first winning season since 2003. This year, they got to the Super Bowl for the first time since 2001. It was successful in many ways and a failure in a few as well.

The Year in Review

The Rams were easily one of the most exciting teams to watch this season. Their offense shifted into another gear this year improving in practically every facet. Their offense put up more points this year (527) than last (478). They also put up more yards (6,738) than last year (5,784) as well. They were the second-best offense in the NFL this year behind only the Kansas City Chiefs.

The offensive improvements can directly be correlated to the progression of quarterback Jared Goff. Goff had an MVP caliber season throwing for 32 touchdowns, 4,688 yards, and only 12 interceptions. He also had a 101.1 passer rating and a 65.9 quarterback rating.

Goff’s football IQ took another step as he was able to dissect defenses more efficiently. Last season many did not trust Goff as a legitimate franchise quarterback. Particularly because of the putrid rookie year he had to play under Jeff Fisher.

He was able to dispel a majority of that sentiment this season with his play. Head coach Sean McVay ‘s system along with a variety of versatile weapons expounded Goff’s talents. The Rams use of play-action was where Goff was truly able to shine.

Jared Goff throwing out of playaction this year was money. Particularly when he still had Cooper Kupp in the lineup. Brandin Cooks was a welcome addition to an already viable offense. pic.twitter.com/H124QBeYwL

It was a tool that would incorporate each of their elite offensive talents in Todd Gurley, Brandin Cooks, Cooper Kupp, and Robert Woods. The nature of the Rams play-action would freeze the defense allowing the offense to always be one step ahead. The offense was so effective that the Rams were on pace to have three 1,000 yards receivers prior to Kupp’s injury.

However, the offense was not able to show up on the biggest stage when they needed to the most. The biggest success of the season was equally its biggest pitfall. The Rams Super Bowl loss to the New England Patriots. A game where their offense was only able to muster three points.

Although, their defense was able to hold the Patriots to only 13 points. An impressive feat considering the Patriots had the fourth best offense in the NFL this year. However, the Rams defense did not perform to this level all year.

On the contrary, they were below average. The Rams defense was 19th in yards and 20th in points allowed. It was a surprise they were not better on defense considering all their big-name additions.

The Rams made a push this offseason to accumulate the most talent available in order to make their Super Bowl run. However, Ndamukong Suh, Marcus Peters, Aqib Talib, and Lamarcus Joyner could all be on other teams next year. Another reason why their inability to finish the job cuts a bit deeper.

However, getting to the Super Bowl itself is an impressive feat. One that should not be taken for granted. The Rams also took care of their core for the foreseeable future in Gurley, Cooks and Aaron Donald. Each player receiving extensions that will keep them Rams for a few years at least.

Retaining that core with Goff will hopefully get them back to the Super Bowl even though it is not guaranteed. While moral victories are frowned upon in many circumstances, this is where it would be suitable.

The experience from this year is invaluable and is another step towards where the Rams want to be. Super Bowl champions. It is a real vision for this team and it is one they now know they can reach.