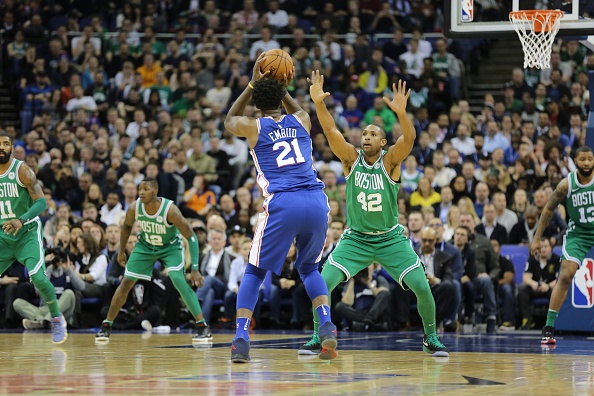 With temperatures getting warmer, days getting longer, and All-Star weekend behind us, attention can start to shift towards the Holy Grail of the NBA campaign. Whilst this year’s regular season has been wildly entertaining, and the upcoming free agency is set to be the most dramatic in recent memory, it is the time between mid-April and mid-June that will always be the most exciting period in the basketball calendar. To paraphrase the NBA’s favorite slogan, the postseason is ‘why we watch’.

From the epic Celtics–Lakers Finals of the 1980s to the slightly less memorable Hawks–Heat encounter in 2009, every playoff series is a step up from the regular season. Some match-ups have a rivalry centered around individual players, some are connected through notorious trades of the past, and some simply hate each other.

And it these contests, the ones where the storylines go beyond what happens on the court, which are the most compelling and remembered forever. They are the ones dispel bad memories or shape the future of the league.

The one everyone wants to see. Last year’s epic series was decided by a second-half collapse for the ages, careless late-game turnovers, and perhaps premature victory confetti, as the 76ers found a way to lose a series in five games that they dominated much of. Since then, the pair have each experienced their fair share of drama, both on and off the court and, with the rivalry between them only intensifying, the prospect of a rematch is irresistible.

Following their acquisitions of Jimmy Butler and Tobias Harris, the Sixers undisputedly have the best starting five in the East. When Butler and Harris are on the court with Joel Embiid, Ben Simmons and J.J. Redick, there is not a quintet in the conference that can match their raw talent. These moves have transformed Philadelphia from the team of the future to a team of the present, and perhaps the only one capable of competing with the firepower of the Golden State Warriors in the Finals.

Yet despite this, they still cannot beat the Celtics. Philadelphia has lost all three match-ups to Boston so far this season and the most recent defeat, a three-point loss at home last week, was particularly painful. Their familiar foe has underperformed this campaign and was without Kyrie Irving, but they handed the ‘Phantastic Five‘ their first loss since forming just before the trade deadline. Just as in last year’s playoffs, the Sixers’ superstars came up small, the Celtics seemed to want it more, and Al Horford dominated his match-up with Embiid, prompting this response from the frustrated All-Star center.

Their games this season have not left any doubt that the teams do not like each other, but a postseason series will have consequences far beyond typical bragging rights. Irving, Harris, and Butler can all become unrestricted free agents this summer, and playoff success will be vital for both the Celtics and 76ers as they seek to convince their top players to stay put or, in the case of Boston, provide them with co-stars. Whoever wins could be poised to compete for championships for the next decade, whoever loses will likely see the core of their team decimated. There is so much to gain, but even more to lose.

Boston and Philadelphia currently sit fourth and fifth seeds respectively and have the same record (37-21), but they could very feasibly meet at any stage of the Eastern Conference playoffs.

The Nets are in the conversation for this season’s most pleasant surprise, and the Celtics are the main reason why. The 2013 trade between Boston and Brooklyn has gone down as one of the most lopsided deals in recent memory, as the Nets inexplicably gave up four first round picks for the Celtics’ for aging greats Kevin Garnett and Paul Pierce. When the duo unsurprisingly failed to lead them to a title, Brooklyn faced the unenviable task of rebuilding with virtually no assets.

Yet Remarkably, after three seasons with neither playoff basketball nor their own pick, they have come out of nowhere this time around to earn the status of one of the most exciting young teams in the NBA. Their success in coming back from the abyss was on full display at All-Star weekend, as Joe Harris won the three-point contest, and D’Angelo Russell became the first Net to play in the main event since 2015. These eye-catching achievements underlined that Brooklyn, who sit comfortably in the playoff picture with the sixth seed, is on the right path to their long-term objective.

And while the Celtics would be heavily favored, a Boston-Brooklyn series would be immensely intriguing. If the Nets did manage to pull off an unlikely upset over the very team whose dealings thrust them into such a mess, it would be the perfect way to signal not only that there is light at the end of the tunnel, but that they have reached the end of the tunnel too. For the Celtics, it would be a catastrophic, but an apt end to what has been a chaotic season to date.

For all the deserved praise that Russell Westbrook‘s explosive, heart-on-his-sleeve, never-say-die style of play receives, the constant narrative surrounding the Thunder point guard is that a team will never win a championship if he is their best player. That theory probably still holds true, but the good news for Thunder fans is that Westbrook no longer is their number one option.

Paul George has taken the proverbial leap this season, transforming from star to superstar with a string of sensational outings that have made him a serious MVP contender. Westbrook, for all his recent struggles shooting the ball, appears to have accepted that PG is OKC’s best offensive option, contradicting the stereotype that the 2017 MVP is fuelled by self-interest and will refuse to defer to anyone.

Westbrook may be a good team-mate now, but one player who had difficulty coexisting with him is a certain Kevin Durant. The pair’s conflict has been well-documented since KD left Russ for the Warriors in 2016, and previous encounters suggest that the feud may be more than media hyperbole.

Tensions between the two have always threatened to boil over, and they may not be able to contain themselves in a playoff atmosphere. This duel between a couple of the NBA’s top players could be captivating and very personal. Beyond their individual battle, the Thunder could be the Warriors’ biggest threat to a three-peat; George’s performances this season suggest that he is on the same level as anyone on Golden State’s loaded roster, and OKC remain desperate to avenge that traumatic 2016 playoff series defeat to Golden State, which essentially cleared the way for Durant’s move to the Bay Area. Westbrook will not fear his former team-mate and with PG, the Thunder will not fear the Warriors.

A potentially fascinating contest between the best and deepest teams in the East, and two franchises who have historically not been true Finals contenders. Both have won 41 games so far this season and will do battle for the first seed between now and the playoffs, as home-court advantage could be crucial in what would be a tight contest.

The match-up would pit Giannis Antetokounmpo and Kawhi Leonard against each other, two players who dominate on both ends of the floor with their incredible athleticism but have different agendas entering the postseason. Giannis, on the one hand, will be looking to establish himself as the league’s best player by taking the Bucks to the Finals, while Leonard, who has far more playoff experience, will be assessing whether Toronto is the right fit for him ahead of his free agency this summer. An early exit for the Raptors would surely spell the end of his time in Canada.

If the above match-ups do not materialize, here are some other unmissable series:

Golden State Warriors vs San Antonio Spurs: Much like the Thunder, the Spurs, despite being massive underdogs in this series, will believe there’s unfinished business between them and Golden State.

Houston Rockets vs Portland Trail Blazers: A likely first-round match-up centered around two of the league’s top backcourt scorers in James Harden and Damian Lillard, and another series with a recent memorable moment…

Any Finals that does not include the Warriors: It would be nice to see a different name at the summit, and whether this convinces Durant to move on.