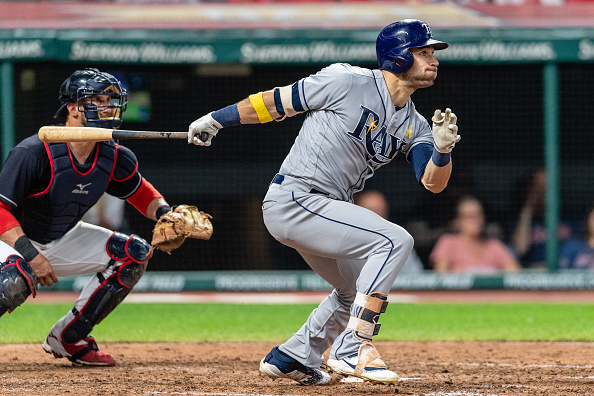 The Tampa Bay Rays are trending upward. After finishing 3rd in the AL East at 90-72 and Kevin Cash finishing 3rd in voting for Manager of the Year, the Rays are trying to show the world they are for real.  But playing in one of the toughest divisions in baseball and having to face the Red Sox and the Yankees on a regular basis will keep this team humble and force them to be patient. But no matter the division, the Rays are putting together the pieces to be competitive for years to come.

Joey Wendle broke out in his first taste of everyday playing time, slashing .300/.354/.435 (.789 OPS) with 7 HR 62 R 61 RBI chipping in 16 stolen bases in 545 plate appearances. This performance was good for a .338 wOBA and 116 wRC+, placing him 4th in the voting for American League Rookie of the Year. Wendle is 28 but has shown poise and patience in the big leagues with a 17.6% strikeout rate. He could be a sleeper candidate for added value and production.

Adames projects to have an above average hit tool and has shown flashes of a 13% BB rate in the minors, with the ability to steal 10+ bases and hit 20+ home runs when he develops. He may not hit .300 every year but could fill the box score and electrify this Rays offense for years to come.

Yandy Diaz is projected to be the starting first baseman on opening day and may hold the position until Nate Lowe is ready from Triple A. If Duffy struggles, this could lead to more playing time for Yandy Diaz, who came over in the Jake Bauers trade.

Diaz is a Statcast darling, with his 44.4% hard contact rate (40th in MLB) and his 92.1 mph exit velocity (22nd in MLB) among players with at least 120 plate appearances. The real concern is his 4.4-degree launch angle, which is well below the league average of 10.9 degrees and is like hitting the ball straight into the dirt.

He still managed to hit .312 last season by putting more than half of his batted balls on the ground and less than a quarter of them in the air. The Rays are confident that there is untapped potential for Diaz with a simple swing change and a launch angle adjustment. After all, he hit .311/.413/.414 (.827 OPS) in his minor league career, while never hitting more than 9 home runs in a season. If the Rays could fix his swing, he could be a .300 hitter with 30+ home run pop.

When healthy, Pham is a Top 20 Outfielder who can fill up the stat sheet and put a team on his back. If he can provide numbers similar to last season’s second half, he can solidify himself as a Top 10 option by season’s end, while bringing a veteran’s presence to this locker room. Never underestimate a redemption narrative.

Meadows is a big specimen (6’3” 210 lbs) with a plus hit tool and above average power. He also possessed plus speed and was active on the bases in his minor league career. He projects to be a consistent 20/20 threat in his prime and could be another steal for this ball club.

Don’t sleep on Charlie Morton. The veteran hurler and former Astro inked a 2 year / $30 million deal with the Rays this offseason and is projected to be their #2 starter.  While the 35-year-old doesn’t have a track record of continued success, he had his best season in 2018 pitching to a career-best 3.13 ERA and 10.83 K/9 over 167.0 innings.

Morton should be pretty solid throughout the course of the season and should be able to keep this club competitor through the summer. If he can pitch like he did in 2018, the Rays have another bargain on their hands.

Tyler Glasnow came over late in the season in the Chris Archer trade and did not disappoint.  In his last 10 starts of the season, he was lights out:

With the exception of a 7 run 0.2 inning outing, Tyler Glasnow was pretty exceptional after being traded to the Tampa Bay. While this outing drastically inflated his ERA, he pitched to a 4.35 FIP and 3.59 xFIP, which clearly indicates that he got a bit unlucky. He also allowed 9 HRs in 10 games, yielding a hefty 1.5 HR/9 (8th) and 19.1% HR/FB (7th). Glasnow’s ceiling was capped in Pittsburgh by only allowing him to pitch minimal innings and never designated him a starter. The Rays should unleash him in 2019, with no innings limits and keep him as a starter where he wants to be. If Glasnow can limit the home runs, he may be in for a solid season and finish as a Top 35 pitcher.

Wander Franco was the Top International Prospect in 2017 and signed with the Tampa Bay Rays as a 16-year-old out of the Dominican Republic.  He would debut with the Princeton Rays in the Appalachian league in 2018, where he saw 273 plate appearances:

This would earn him MVP Honors and the attention of every major league scout on the planet. He was later ranked the #13 Prospect on MLB’s Top 100 Prospect List as a 17-year-old. Franco is a player who knows how to take a walk and never strikes out. He has elite bat speed and power to all fields from both sides of the plate, with a knack for barreling the ball. He will be a consistent .300 hitter in his prime with 30 home run potential. But he’s only 17, so waiting is the hardest part.

Honeywell would miss the entire 2018 season after having Tommy John surgery, but is slated to be healthy in Spring Training and should start the season in AAA. However, with a solid performance to start the season, he could push the Rays hand and be up as early as May. Honeywell has 5 pitches that all project as above average offerings that he can throw in the zone for strikes. Honeywell should be a middle of the rotation starter when he gets the call to the majors with the potential for so much more.

The Tampa Bay Rays have really done quite well in the trade market last season. They have some explosive offensive talent, along with a pitching rotation that should turn heads this season. They are still a relatively young squad and really do not have a lot of money on the books.  Playing in the dreaded AL East, it will be difficult for this team to consistently make the playoffs with the Yankees and Red Sox playing in their backyard, but they definitely have the tools and the talent to make a postseason run. This should be a fun team to watch for years to come.