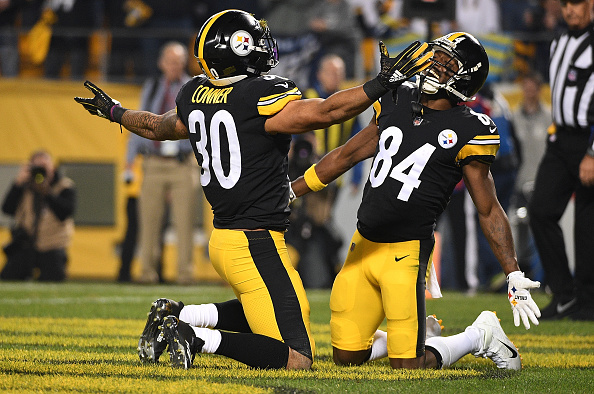 The Pittsburgh Steelers went 13-3 in 2017 and many predicted they would be one of the top teams in the AFC. Instead, they didn’t even make the playoffs. What happened?

The Steelers and Le’Veon Bell couldn’t work out a long term contract in 2017, so the Steelers placed the Franchise Tag on him. Bell played the 2017 season and both sides tried to work out long term contract in 2018. They couldn’t agree to a long-term deal so the Steelers placed the Franchise Tag again on him, meaning he would earn $14.5 million. The Steelers expected him to sign it and play just like in 2017, but that didn’t happen. Bell sat out the entire season, forfeiting the year’s pay. This came as a total surprise to the Steelers, who now had to depend on the 2nd year back James Conner.  Conner had a great season, getting 1,470 all-purpose yards and 13 touchdowns. He did suffer a high ankle sprain in December and that hurt the Steelers running game. Not having Le’Veon Bell for the season hurt the offense, but it also took up $14.5 million against the salary cap, and the Steelers could’ve used that money to shore up the defense.
The Tie In Cleveland

In 2017, the Steelers were involved in many close games, but would somehow pull out a win in the final minutes. That was not the case in 2018 and the first game at Cleveland was an example of that. The Steelers led 21-7 going into the 4th quarter but gave up 2 to send the game into overtime. They had a chance to win the game on a Chris Boswell field goal but he missed (also not a good sign for the season).

One of the many reasons the Steelers didn’t make the playoffs was that they went winless against the AFC West. After the tie in Cleveland in Week 1, the Steelers hosted the Chiefs and lost 42-37. The game really wasn’t that close. The Chiefs offense scored at will against the Steelers defense, just like the Jaguars did in the 2017 Divisional playoff game.  The Steelers beat the Buccaneers in week 3 and lost to the Ravens in Week 4.  At 1-2-1 and in the bottom of the AFC North, many wondered if this was a lost season. The Steelers responded with 6 straight wins, including a 52-21 destruction of the Carolina Panthers in Week 9. At that point, it was assumed the Steelers would get one of the top seeds in the playoffs. Then at Denver in Week 11, the Steelers lost 24-17 in a game where they dominated at times but made costly errors. The next week against the Chargers, the Steelers had a 23-7 lead going into halftime but somehow lost 33-30 as the defense completely collapsed in the 2nd half. Then there was the Oakland game. The Steelers lost 24-21 at the 3-10 Raiders in a game where Ben Roethlisberger got hurt at the end of the first half. He sat out most of the 2nd half and it was revealed that he could’ve come in sooner, but the coaches decided he should stay on the sidelines. On the list of reasons why the Steelers didn’t make the playoffs, this game might be the biggest.

Another reason the Steelers lost all those close games that they won in 2017 is Chris Boswell. Boswell’s career kicking percentage is 85.2%, but in 2018 it was 65%.  He was put on injured reserve before the final game of the season and will face competition for his job in 2019.

Another big reason for the Steelers missing playoffs was that they would commit a turnover at the worst possible time. James Conner (Cleveland game), Xavier Grimble (Denver game), Stevan Ridley (New Orleans game) and JuJu Smith-Schuster (New Orleans game) all had costly fumbles. Ben Roethlisberger led the NFL in interceptions and some of those interceptions came at the worst times.

After the 3-game losing streak and the Ravens surging, the Steelers found themselves having to beat New England, New Orleans and Cincinnati to make the playoffs. This stretch started great as they finally beat the hated Patriots 17-10 in Pittsburgh. In New Orleans, the Steelers lost 31-28 then won in the final game against the Bengals, 16-13.  They had to hope the Browns could beat the Ravens in Week 17, but they lost, giving the Ravens the AFC North title.

If you just looked at Antonio Brown’s stats (104 receptions, 1,297 yards, 15 touchdowns), you’d think he had an awesome year. What the stats don’t show is all the problems he had off the field. He skipped most of OTAs when he saw Ben Roethlisberger wasn’t there, gave bizarre interviews, showed up in helicopter to training camp, disappeared during training camp, threatened reporters, tweeted that he wanted to be traded, missed a meeting after the Chiefs game, was sued for tossing furniture from his apartment building and was caught driving over 100 mph on a suburban Pittsburgh road. Then in the final week of the season, he got into an argument with Ben Roethlisberger, left practice and didn’t show up until before game, where he was told he couldn’t play. He left at halftime. After the season, he refused to talk to management, made bizarre social media posts, and has demanded a trade.

Since it appears the Steelers will trade Antonio Brown, they now have a huge hole to fill at wide receiver. They also have huge holes to fill at inside linebacker and cornerback.  Will they fill them at free agency or at the draft? We’ll see. With the 20th pick in the draft, they could get someone like Byron Murphy as one mock mentioned and Devin Bush may be an option there as well. There is still a lot of talent on this team but they have many questions to answer before the beginning of the season.