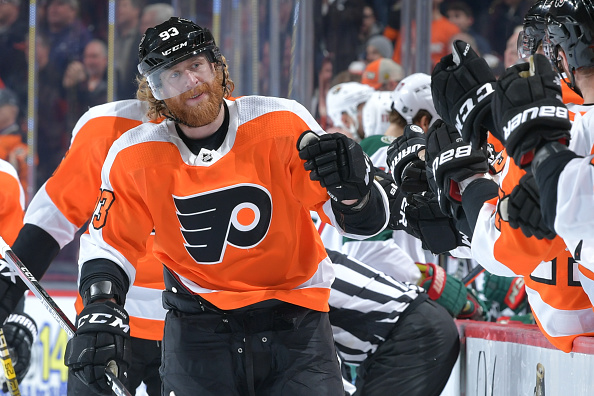 A full Tuesday slate of games in the NHL brings us 12 games to pick from for our DFS lineups. Capitals/Blue Jackets, Hurricanes/Senators, Flames/Lightning, Flyers/Wild, Rangers/Jets, Leafs/Avalanche appear to be the best games to target at first glance.

The Hurricanes have surprisingly played very well since the break and are the second highest scoring team in the NHL since mid-January. They are averaging 3.8 goals per game during that clip. They draw the 31st ranked in goals against per game, the Ottawa Senators. Teravainen has been the Canes most productive player over the last five games with four goals and six points.

The Flyers are still rolling with just one overtime loss being their only defeat over the last nine games. Plug as many Flyer players in your lineup as you can, Voracek at this price is a great play(eight points over his last five games). The Flyers opponent, the Wild, have fallen on hard times with injuries to two of their most important players, Miko Koivu and Matt Dumba. The time might be now to hammer against Minnesota.

The Leafs get a great matchup against the struggling Avalanche as the Avs have won just once in their last nine games, giving up 36 goals, fourth worst in the NHL since January 16th. The Leafs continue to roll and are fourth best in the league in scoring. Tavares has been the model of consistency and is a great value per dollar play. Over his last five games, Tavares has three goals and three assists and 17 shots on goal.

The Jets are one of the best teams in the league on home ice this season with a 20-6-3 record, they draw the very mediocre, New York Rangers Tuesday night. The Jets finally have their star defensemen back in the lineup and at this price, we shouldn’t hesitate to play big buf. 23.5 minutes per game over the last five show us that Byfuglien is ready to contribute.

Lindblom finds himself on the Flyers first line for Tuesday’s matchup versus the Wild. His linemates, Couturier and Voracek have been lighting it up of late each scoring eight points in there last five. Let’s see if Lindblom can get in on the scoring while getting first line minutes.

As you can tell, the Flyers are high on my list tonight. Sanheim is coming into his own of late and the Flyers are leaning on him more as the season goes on. Sanheim gives you blocks as a base with 16 over his last five, he’s chipping in offensively as well with four points and 13 shots over the same period.

Although he is listed on the Leafs fourth line and averaging just over 11 minutes per game in the last five contests, Johnsson has proved to be very productive notching six points. Johnsson also gets second line power play minutes.

Roslovic continues to fill the role that injured winger Nikolaj Ehlers played and is doing so fairly well. Three goals and an assist over the last five. Roslovic is also getting time playing the point with Dustin Byfuglien on the Jets first powerplay unit.