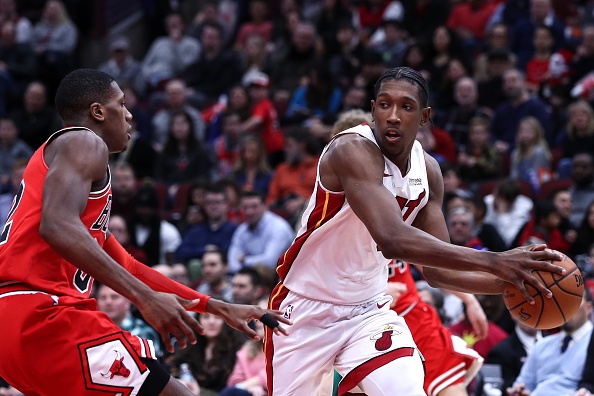 Here are my four takeaways from Sunday night’s 120-118 loss to the Golden State Warriors.

Yes, it was the second consecutive game Miami gave up a lead of 17 or more points. However, the difference was this one came against the two-time defending champion Golden State Warriors and ended with a wild finish. With a starting lineup of five all-stars, you knew the Warriors were going to come back. But yet, when the Warriors went up nine points, the Heat continued to fight back to cut and take the lead.

Josh Richardson came to play tonight. He had 19 points by halftime, shooting 5 of 7 from three-point land. He closed the night with a career-high 37 points, scoring 11 big ones in the fourth quarter. He surpassed his previous career-high of 32 points earlier this season against Atlanta and shot a sizzling 8 of 11 from beyond the arc.

Despite the final result, you have to be impressed with the night @J_Rich1 had!

A career high 37 points with a career-high 8 3-pointers made.
🔥🎥 #HEATHighlights pic.twitter.com/A2pgxoFrxS

It was great watching Josh Richardson go toe to toe with the best team. He was the best player on the floor for the Heat tonight and was sensational on both ends of the floor.

Dion Waiters had his best game as a Heat’s starting shooting guard. Waiters shot 6 of 13 on three-pointers to keep the Heat afloat. He closed the night with 24 points. You can tell he’s getting his legs back under him. Would like to see him attack the basket more though.

Dion Waiters pulls up from deep!@MiamiHEAT off to quick start, lead @warriors 17-6 on @NBATV. pic.twitter.com/ruVOOeql3O

Waiters finished the game alongside Justise Winslow, Bam Adebayo, Dwyane Wade, and Josh Richardson. Not sure if that will be the Heat’s closing lineup going forward but it is interesting.

The Heat is now 1-2 on its five-game West Coast trip, with another challenge awaiting them on Monday. Miami will complete its brutal back-to-back set against the Denver Nuggets, who own the second-best record in the Western Conference. The Nuggets won its first meeting against the Heat, 103-99, Jan. 8 at AmericanAirlines Arena.

The Heat will try to avoid a season sweep by Denver on Monday. The game tips off at 9PMET.