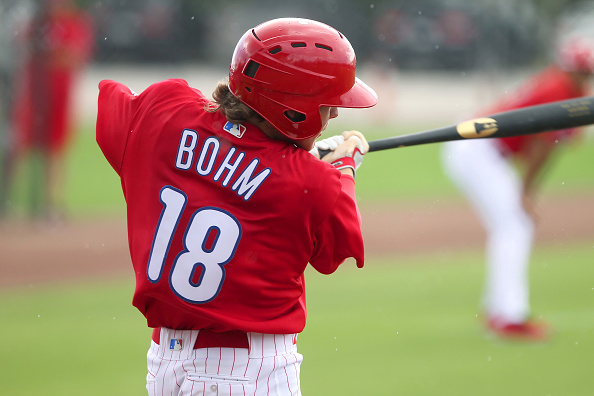 The Philadelphia Phillies Farm System is the 8th best minor league system in all of baseball. Headlined by (2) Tier 1 and (2) Tier 2 prospects along with one of the strongest off-seasons in recent memory, the future is bright in Philly and their fan base has hope again. (PS – I started writing this before the JT Realmuto trade and Sixto Sanchez was the Phillies top prospect at that time. If you would like to read about Sixto Sanchez, and you should, he is the last prospect on this list).

Bohm makes consistent hard contact and knows how to take a walk. His above-average hit tool projects as plus in the bigs and his excellent bat speed should help him develop more power when he gets to the majors. He is not strong defensively and a move to first base could be in his future. The Phillies love him long term and think he could be their 3rd baseman for the time being.

Coming into the 2017 season, Medina was ranked as the #91 overall prospect in baseball by Baseball Prospectus. He would see a promotion to the South Atlantic League with the Lakewood BlueClaws, where he would continue his stellar play, finishing the season 4-9 to a 3.01 ERA 1.19 WHIP 10.00 K/9 2.93 BB/9 in 22 starts over 119.2 innings pitched. His strikeout totals were good for 4th in the league and bumped his prospect rating up to #46 by Baseball Prospectus coming into 2018.

Adonis Medina’s fastball is featured prominently in his arsenal, projecting as a plus offering and sitting in the low 90s. His heater has touched 96 mph, which he commands well and tends to give up a lot of ground balls due to late break and sink. His slider is only an average pitch, but has developed sharper break and could be a plus offering with more refining. His changeup is above average and could project as plus at the major league level.  He throws all his pitches for strikes and his command is solid. His arsenal has improved at every level, causing an impressive increase in his strikeout rate. He is only 22 and should start his 2019 campaign at Double-A, but with a strong start to the season, we may see Medina as a summer call up.

Adam Haseley was selected 8th overall by the Philadelphia Phillies in the 2017 MLB Amateur Draft. He was a two-way standout at the University of Virginia and would receive 3rd Team All-American Honors his sophomore season with a 9-3 record and a 1.73 ERA. He would also hit .304 and was a finalist for the John Olerud Award, which recognizes the College’s best two-way athletes. He received First Team All-American Honors his junior season, hitting .390 with 14 home runs and 56 runs and was again a finalist for the John Olerud Award.

While Haseley doesn’t have a ton of power, he has an above average hit tool and could project as plus when he gets to the majors. He makes a lot of quality contact to all fields and doesn’t strike out a lot, which is evident with his 15.4% strikeout rate in his minor league career. His power is below average, but he should add some when he is getting everyday at-bats in the bigs. He should start the year off in Double-A but could push the Phillies’ hand with strong play from the start.

Romero appeared to be a pure pitcher when coming up through the ranks, but as his stuff continued to get better at each stop paired with his impeccable command, he turned out to be a better prospect than the Phillies first thought. His four-seam fastball is a plus offering and touched 95 mph at times last season, while his two-seamer has late sink and can induce a lot of weak contact and ground ball outs. He has as many as 4 secondary offerings, but his breaking stuff (Slider, Curveball) only project as average pitches. Both his cutter and changeup are above average pitches that could project to be plus offerings when he gets to the majors. He can throw all of his pitches for strikes and commands the zone well with each. While Romero projects as a back end starter, he has the potential to crack the front end of the rotation with a little development.

Mickey Moniak was drafted as the #1 overall pick in the 2016 MLB Amateur Draft by the Philadelphia Phillies. He would skyrocket up drafts boards after hitting .476 his senior year, with 7 HR 40 R 46 RBI and 12 triples in 29 games.  He also finished with an insane .961 slugging percentage and was later named Baseball America High School Player of the Year, California Gatorade Player of the Year and San Diego Section Player of the Year. He would commit to playing baseball at UCLA but was lured away from his commitment by the Phillies after signing a $6.1 million signing bonus.

Mickey Moniak was semi-productive in his first exposure to professional baseball in the Rookie League, but struggled immensely with his promotion to Class-A and was unable to find his groove in the lower ranks of the Phillies system. Even though his hit tool is only average, he showed signs of a player that can hit for average and be selective at the plate. His power is below average, but he makes consistent hard contact from the left side of the dish and should add some power with his development. He has plus speed and should be active on the base paths, possibly eclipsing 20 stolen bases a year. Moniak is a special talent, but one that the Phillies should bring up slow after his struggles in Low A. If they don’t, they could have another #1 overall bust on their hands (see Mark Appel).

Sixto Sanchez was discovered by the Phillies in 2014 when he was seen throwing batting practice to a Cuban catcher the Phillies were scouting. The team was so impressed with his skill set that they later signed him as an international free agent in 2015 for $35,000 which is an absolute steal for the caliber of prospect he has become.

He would start the 2018 season back in A+ in the Florida State League, going 4-3 with a 2.51 ERA 1.07 WHIP 8.68 K/9 2.12 BB/9 in 8 starts across 46.2 innings pitched. The Phillies would shut him down for the season in June after a bout with right elbow inflammation, but he was still selected to the Florida State League Mid-Season All-Star team and ranked as high as the 13th best prospect in baseball by Baseball America.

Sixto’s fastball projects as plus-plus, with his four-seamer sitting in the high 90s with the ability to touch 100mph. His two-seemer has a lot of late movement and sink and he is able to command it all over the strike zone. Both his curveball and changeup are above average offerings and could project as plus pitches in the bigs with further development. The Phillies will certainly take caution with their #1 prospect after a DL stint for elbow inflammation, but we could see him in late 2019 if the Phillies rotation doesn’t pan out.