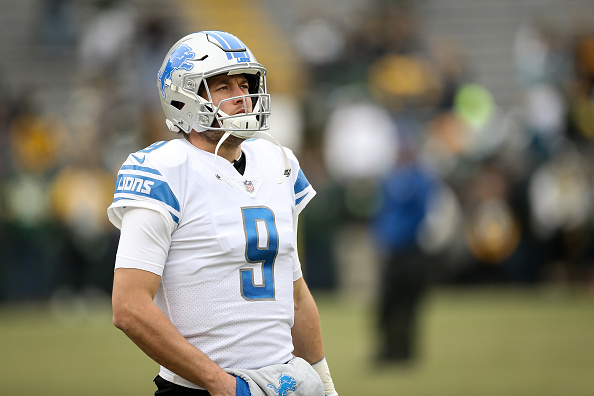 The Detroit Lions ended the season with a dominating 31-0 win over arch-rival Green Bay to finish 6-10, this was the team’s worst season since 2012. With a second season under head coach Matt Patricia coming up, we should expect multiple changes this offseason as he continues to shape the roster to fit his scheme.

Detroit has already made a big move to try to correct some of the offensive issues going forward, replacing Jim Bob Cooter at offensive coordinator with Darrell Bevell. With a very forgettable season to look back on, Lions fans will be counting on Patricia and general manager Bob Quinn to hit it out of the park at the draft. They will be selecting 8th overall, and with this NFL Draft brimming with talented defensive lineman and pass rushers, they should be able to select an elite pass rusher if they choose to go that route.

Not a lot went right for the Lions. The offense, which was supposed to be the team’s strength, sputtered and ended up ranked in the bottom third of the league in almost every major category. Matthew Stafford for his standards did not have a very good year, throwing his fewest yards since 2010 and his lowest number of touchdowns since 2012. Even when Stafford had Golden Tate and a steady Marvin Jones to throw to, along with what could be the first legitimate running back in Detroit for a number of years, the numbers still weren’t on par with last season.

Stafford will very likely be the starter going into next year, as there really isn’t anyone in free agency that could come in and do a better job in my opinion. Quinn would be wise to find a young developmental quarterback in case Stafford’s play continues to suffer, but I still believe Stafford will be keeping a firm grasp on the starting job for the foreseeable future.

The Lions have had 12 different leading rushers in the 20 seasons since Sanders retired and just three of those backs have eclipsed 1,000 yards rushing in a single year, including both James Stewart and Kevin Jones, and they both had their careers cut short through injury. Kerryon Johnson was on pace to join Stewart, Jones, and Bush as the only running backs since Sanders to hit the 1,000-yard mark. Unfortunately for Johnson, he also picked up a knee injury in November, but still had a decent season, posting 641 yards rushing and three touchdowns on 118 carries. Johnson has said he’s healing well from the knee injury and should be healthy for next season.

They started the season with three main wideouts in Kenny Golladay, Marvin Jones Jr., and Golden Tate, but by December, they were only left with Golladay, as Jones was out of commission due to injury and Tate was traded away to the Philadelphia Eagles for a 4th round draft choice. They may have ended up unearthing a true future number one receiver in the process as Golladay took some major leaps forward in his development in 2018 and showed the Detroit Lions what he’s really capable of given the opportunity.

Leading the club with 70 receptions for 1,063 yards and 5 touchdowns, it was a huge leap from his injury-riddled rookie year, where he contributed 28 catches for 477 yards and three touchdowns. They now lack a serviceable slot receiver, after trading away Tate, so will probably look at picking up a replacement in free agency or dip into the draft to try and fill the hole.

The Lions have a nice core of defensive linemen in Damon Harrison, A’Shawn Robinson, and Da’Shawn Hand. Darius Slay just played in his second straight Pro Bowl and is looked at by many people to be among the best cornerbacks in the NFL. Midway through the season, Harrison was picked up in a mid-season trade steal with the New York Giants, in which they only gave up a fifth-round pick for him. Needing a lot of help with their run defense, his impact was felt immediately after joining the team in Week 8. In his debut against Seattle, Harrison came into the game, racking up seven tackles, one sack and two tackles for loss. Signed through the 2020 season he will be looked at as a critical piece in the defensive core going forward, as they try to add more talent.

The biggest roster decisions are with players currently under contract for 2019. Free safety Glover Quin could become a cap casualty, given his age and size of his salary. He has, in fact, admitted to contemplating retirement as far back as two seasons ago. Guard TJ Lang is another player that may be let go, cutting him would save 9 million dollars in salary. Edge rusher Ziggy Ansah who played in just seven games in 2018 due to a shoulder injury, will be expecting to get paid handsomely in free agency, it looks very likely he will be let go. Defensive end Trey Flowers is a player that has been mentioned, as someone that could be a possible free agent acquisition. His experience in Matt Patricia’s defensive scheme and familiarity with each other, it could certainly end up being a good fit.

Greedy Williams CB LSU – Among the Detroit Lions’ many needs this offseason is finding a more reliable playmaker opposite Darius Slay in the secondary. Williams has the ball skills that they have been missing with the No. 2 cornerback spot. He’s a serious ball-hawk with a superb catch radius that allows him to fight for the ball, as well as the blazing speed to keep up with just about any receiver. The biggest concern is his lack of physicality, both in disrupting routes and in run defense.

Clelin Ferrell DE Clemson –  Clelin Ferrell could be a nice replacement, should Romeo Okwara end up splitting town? His sack totals increased in every season he was at Clemson. Ferrell’s last year he recorded 11.5 sacks and had 55 tackles, 20 of those were for a loss. He’s very good in run defense with the potential to record double-digit sacks as he develops. He’s not a naturally explosive athlete to win on just burst, has average speed around the edge. Will they take the shot with their 8th overall pick?