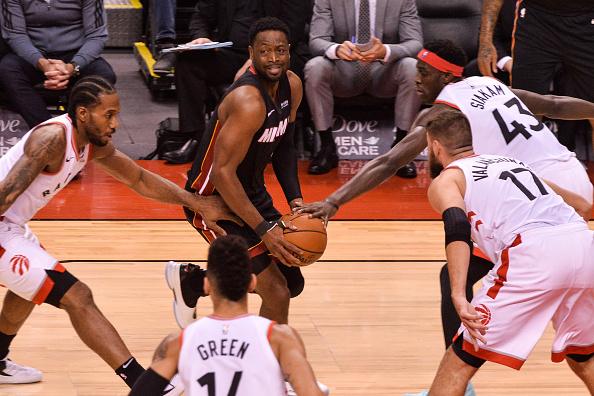 Here are my four takeaways from the Miami Heat‘s 102-96 loss to the Sacramento Kings.

It looked like the Heat were going to win their second consecutive road game. Instead, the opposite happened. After trailing by 17 points late in the third quarter, The Kings stormed back in the fourth by outscoring the Heat 27-13. The mindless turnovers, stagnant offense, and missed free throws really hurt Miami down the stretch, dropping them to 1-1 on the ongoing five-game West Coast trip. The defeat also means they have been swept in the season series with Sacramento. They are about to face one of the toughest back-to-back sets in the league, against the Western Conference’s top two teams. They face the defending champion Golden State Warriors on Sunday before taking on the Denver Nuggets on Monday.

Wade Falls Down, Gets Right Back Up

There was a scary moment with 10 seconds left in the first period, as Dwyane Wade went to the locker room after taking a hard fall on a rebound attempt. Wade eventually returned in the second quarter and scored 11 points in the period. He closed the game with 15 points and four assists.

Unreal… @DwyaneWade came back from the locker room and proceeded to do this… pic.twitter.com/jsplIzhez8

The Heat announced that he passed the concussion protocol and suffered a right elbow contusion on the play.

With Tyler Johnson dealt to the Phoenix Suns, the Heat moved Dion Waiters in the starting lineup. This was the Heat’s 20th different lineup of the season and Waiters first start since December 2017. Waiters finished the night with 12 points on 4/12 shooting.

The trade also adjusted the team’s rotation. Rodney McGruder and two-way guard Duncan Robinson recieved increased minutes on Friday night. Only newcomer Ryan Anderson did not get on the floor for Miami.

On Wednesday, The Heat traded guards Johnson and Wayne Ellington to Phoenix for veteran forward Anderson. The move cleared some of the logjam at the shooting guard position, as well as opening up two roster spots for Miami.

By league rule, the Heat will have two weeks to fill at least one roster spot to reach the league minimum. What will they decide to do? Well, they have two options: They could convert one of their two-way players(Yante Maten, Duncan Robinson) to a standard contract, or sign a veteran player on the free agency market.