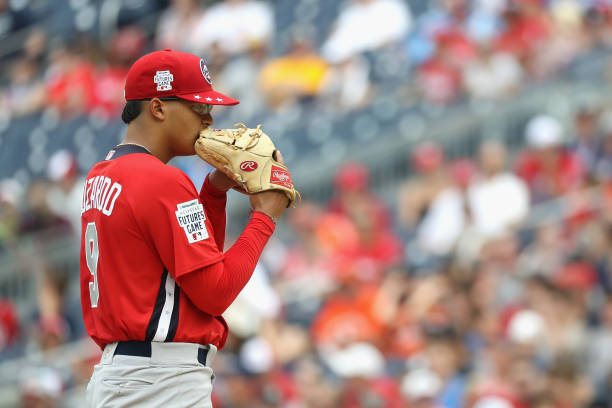 The Oakland Athletics A’s were one of baseball’s biggest surprises last season as they finished second in the AL West with ninety-seven wins. On top of contending earlier than many expected they also possess the seventh best farm system in baseball. Led by two talented arms and a plethora of position players the A’s will only continue to improve.

After undergoing Tommy John Surgery before the 2016 MLB draft Luzardo has become one of the best pitching prospects in baseball.  He is currently the twelfth best prospect in baseball and top lefty. Luzardo was originally drafted by the Nationals and acquired by Oakland in the Sean Doolittle trade. It may turn out to be one of the A’s best moves aa has drawn comparisons to Johan Santana.

Luzardo consistency operates in the high 90’s with devastating breaking stuff. His pitches have a natural sink to go with advanced control and command. He is already moving fastly through the system and excelled in Double-A.

Despite his dominance of the minors the A’s will be careful with their prized lefty. If he can stay healthy then he has the capability to be a top of the rotation arm. Along with the Puik the second prospect on this list the A’s could have a formidable rotation for years to come.

Entering the 2016 draft Puk was seen by some as potential No.1 overall pick after a dominant sophomore campaign at Florida. His junior season, however, did not go as well due to injuries. The A’s still took him sixth overall and gave Puk the largest signing bonus for a pitcher in franchise history. Puk lived up to the hype with a Minor- league-leading 13.2 strikeouts-per-nine in 2017.

Tommy John surgery caused him to miss all of 2018 however he possesses elite stuff. Puk’s fastball tops out at 97 mph, and he has a devastating slider. He also features a curveball and changeup that was showing improvement. Despite missing all of 2018, he is still the 41st ranked prospect in baseball.

When healthy the Florida product has the opportunity to the top of a rotation starter. The key for Puik will be improving his command being able to repeat his delivery. If Puik can do that than the A’s will have a star at the top of their rotation for years to come.

Murphy is the first position prospect on this list and the 47th best prospect in baseball. He was taken in the third round of the 2016 MLB draft and has moved fastly through the system. In his first season, Murphy earned California League All-Star honors after bypassing Single-A entirely. He was even better for Double-A Midland before a broken hamate bone in July ended his season.

He has drawn high praise for his athleticism and agility behind the plate. He has a strong arm as only 46 baserunners tried to steal on him in 2017 over 90 games.  Murphy impressed. scouts with his ability to handle the pitching staff.

Offensively, he has a unique skill set that makes him dangerous at the plate. Murphy has an interesting blend of power and on-base skills from the right side of the plate. He is an intriguing prospect who’s defense alone could one day make him an everyday catcher in the majors.

The A’s drafted Beck, a prep bat, with the sixth overall pick in the 2017 MLB Draft. After a slow start to his pro career, Beck took a major step in 2018.  He simplified his swing allowing the raw tools that made him a top ten pick. With a new approach, 2019 could be the year that Beck takes off.

Beck has the chance of being an above average hitter due to his raw power and bat speed. He is able to generate hard contact to all fields which will only improve with more experience. While his home run totals have been low he projects to hit 20-25 home runs annually. His speed will make him a threat on the bases which he has excelled at in the minors.

Murray is the last name on this list however he may be the most intriguing prospect in the minors. due to his success on the gridiron Murray has made headlines since being drafted. The Oklahoma quarterback has made it clear football is a priority as he will enter the NFL draft.  Despite his interest to pursue a football career the A’s still took a chance on Murray last season.

After being drafted ninth overall by the A’s Murray showed tremendous promise. During his breakout spring, he made better contact and showed improved plate discipline. He has the speed to terrorize pitchers on the bases and strength to produce above-average power. He still, however, is a work in progress.

Murray still needs to improve his plate discipline despite the improvements he has made. His arm currently rates as below average but, he has the speed to be a successful outfielder. Despite his weaknesses, he still projects to make an impact in the majors. If he can stay healthy on the gridiron, then the A’s could one day get a big return on their investment.