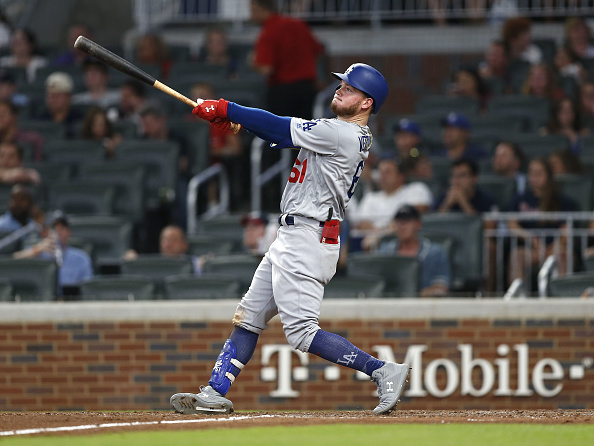 The Los Angeles Dodgers currently have 4 of their top prospects firmly solidified in MLB’s Top 100 Prospects List. The Dodgers farm system ranks as the 8th best in baseball, with at least 4 of their top prospects having the potential to make an impact in 2019. With a deep minor league bench, this team is stacked and should be competitive for years to come.

It feels like we have been talking about Alex Verdugo for years and waiting for his big league debut, but a log jam in the outfield has blocked him from everyday playing time and the Dodgers are too high on his skill set to trade him away. Verdugo was selected in the 2nd round, 21st pick by the Los Angeles Dodgers in the 2014 MLB Amateur Draft. Considered one of the best two-way players in the draft, most scouts favored his development as a left-handed pitcher with an electric arsenal of secondary offerings. Verdugo elected to play every day and the Dodgers would sign him as a full-time outfielder.

Verdugo is major league ready, but there is still nowhere for him to play. Recently signed AJ Pollack is expected to man center, while Cody Bellinger sticks in RF and Joc Pederson will play LF. Verdugo has a plus hit tool and one that could project as plus-plus once he gets to the majors. His elite bat speed (think Cody Bellinger) and his ability to barrel the ball with power to all fields make him a lock to hit .300+. But his 1.6° launch angle is well below the 10.9° league average and he could add more power by lifting his swing. Verdugo’s elite plate approach (9.0% BB 16.2% K) and ability to get on base (.367 career OBP in minors) should keep him in the lineup most days, while his ability to hit .300+ and 25 home runs in his prime should make him a very solid major leaguer. He’s ready.

A move to the states and a promotion to Rookie ball in the Arizona and Pioneer Leagues really put his talents on full display, hitting .374/.412/.527 (.939 OPS) in 245 plate appearances. He would only strikeout in 11.0% of his plate appearances and his plate approach showed poise and maturity for a prospect only known for his glove. He would continue to rake at every level in the minors. He was promoted to A ball and A+ in the Midwest and California Leagues in 2017, hitting .316/.361/.452 (.813 OPS) with 8 HR 58 R 51 RBI in 411 plate appearances. He would later be selected to the All-Star team in the Midwest League and was named the Dodgers’ Minor League Player of the Year for his stellar performance as a 19-year-old.

Ruiz is a switch-hitting catcher, whose power tends to come from the left side of the plate. He is very tough to strike out and makes quality contact through his ability to barrel the ball and has a great feel for the strike zone. He is a dead pull hitter and doesn’t hit the ball in the air a ton, but his projected 15-20 home runs annually could be far greater if he commits to a swing change. The Dodgers are excited about this kid’s potential and he has quickly become one of the best catching prospects in baseball.

Dustin May was drafted in the 3rd round of the 2016 MLB Amateur Draft by the Los Angeles Dodgers. He originally committed to the play for Texas Tech but would forego his commitment and sign a $1 million signing bonus with the Dodgers.

He would start 2018 back in A+, but was later promoted to AA in the Texas League at only age 20 and would finish the 2018 season 9-5 with a 3.39 ERA 1.11 WHIP 8.30 K/9 1.97 BB/9 in 23 starts across 132.2 innings. He was later selected to the California League All-Star Team. Dustin May is currently the Dodgers top pitching prospect and the club is very high on his future outlook, being that they refused to include him in the deal that brought Manny Machado to LA.

May’s fastball currently projects as a plus pitch, with the potential to be a plus-plus offering in the majors. The Dodgers had May switch from a four-seamer to a two-seamer, which added about 3 mph to the pitch and now sits in the mid to high 90s with late life and sink to help induce groundballs. After ditching his slider which was all too similar to his curveball, the Dodgers had him focus on his curve, which is a sharp hook with groundball potential and also projects as a plus offering. His changeup is an average pitch and should play up in the majors if he is able to further develop his cutter that he added in 2018. May has above-average control and can throw all of his offerings for strikes, which projects as plus control when he reaches the big show. He has the potential to be a front-end starter but currently looks like a #3 SP.

Gavin Lux was selected in the first round of the 2016 MLB Amateur Draft by the Los Angeles Dodgers. He was a Top 50 high school prospect coming into the 2016 season and won the Wisconsin Baseball Gatorade Player of the Year. He had originally committed to play for Arizona State University, but the Dodgers were able to get him to forego his commitment by handing him a $2.31 million signing bonus.

After struggling in his first exposure to professional baseball, Lux got himself back on track in a big way. He boasts an above-average hit tool that projects as a plus when he gets to the majors.  While his power is average, he has added more launch angle to his left-handed swing and should develop more pop at the big league level with his exceptional bat speed and quick hands. Not known for stealing bases, he surprised everyone in 2017 by swiping 27 bags and his plus speed should keep him active on the base paths.  Lux has a great feel for the strike zone and above average plate discipline while making consistent contact. With Corey Seager (SS) locked in as the everyday shortstop and Chris Taylor (2B) manning second, Gavin Lux may be waiting a while.

Dennis Santana signed with the Dodgers as an international free agent in 2013.  Originally signed to play shortstop, his .198/.312/.256 slash line as a hitter underwhelmed the organization and forced him to commit to pitching.

He was promoted to the majors in May of 2018, striking out 4 batters in 3.2 innings in a relief effort. He would also allow 5 runs on 6 hits, but still get the win despite the poor effort. He was scheduled to make his first big league start on June 7, but a rotator cuff strain would send him to the DL and he would eventually miss the rest of the season.

Santana’s fastball is a plus pitch but flashes plus-plus potential at times. His fastball can top out at 98 mph and it’s late life and sink can induce a ton of ground balls and strikeouts. His above-average slider flashes plus and has swing and miss potential, while his changeup is below average and needs more time to develop. His low arm slot and delivery make it difficult for him to command his pitches at times and has contributed to his inflated walk rate. He projects as a back end starter but could have closer potential if he can’t lock down a rotation spot.