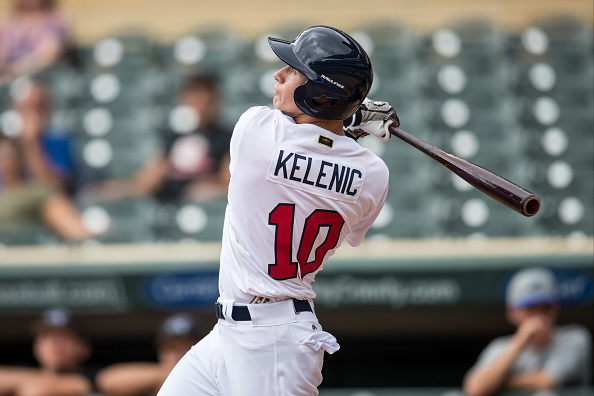 Over the course of this offseason, the Seattle Mariners have entirely revamped their farm system. The struggle to rebuild the system has been challenging. However, the team is seemingly moving in the right direction entering the 2019 season. After unloading large contracts and aging veterans, Mariner fans have something to be excited about this year and beyond.

The Mariners unloaded the contract of Robinson Canó in a blockbuster trade and returned one of their pieces, in Jarred Kelenic. Kelenic spent his first year in professional baseball split between Kingsport, in the Appalachian League, and the Gulf Coast League Mets.

Kelenic is the Mariners number two overall prospect and looking to make an impact sooner rather than later. Impressively, Kelenic was selected in this past years draft number six overall. In his time at Kingsport, Kelenic slashed a modest .253/.350/.431 with a .361 wOBA and slightly above-average 107 wRC+. However, in his 12 games with the GCL Mets, Kelenic slashed .413/.451/.609 and an outlandish .483 wOBA with a 192 wRC+.

Regarding his scouting, Kelenic possesses top line raw power and decent speed. He carries a smooth swing through the zone from the left side of the plate with ease and the ball rockets off the bat. Regarding his fielding ability, Kelenic has above-average throw power and is improving his defensive quality. He made just three errors across 437.0 total innings.

Kelenic is one of the most intriguing prospects in the Mariners system and should see a quick climb in the system.

Outside of Jarred Kelenic, Justus Sheffield is the prospect I am most excited about in this system. Acquired in the offseason from the New York Yankees in the deal which sent ace James Paxton east, Sheffield slots in as the Mariners top prospect and for a good reason.

Just 22 years of age, Sheffield pitched well enough to earn a September call-up last season. It was especially impressive given the fact he began the year at Double-A Trenton. Across his time in the minors in 2018, Sheffield showed off his talents well. At Trenton, Sheffield pitched to a 2.25 ERA across 28.0 innings earning the call to Triple A. Sheffield logged 88.0 innings in his time, pitching to a 2.56 ERA over 15 starts.

Sheffield is a three-pitch pitcher, with an above-average fastball, slider, and changeup which continues to develop. The slider may be his best pitch and will play well pitching in T-Mobile Park. Sheffield’s fastball can reach up to 97 mph and shows the ability to run and sink, giving him another plus pitch.

As Sheffield saw a minute amount of time in the majors in 2018, and with the state of the Mariners pitching staff currently, Sheffield very realistically work his way into the rotation as a back end starter to begin the season. If he shows out at spring training, it could be a reality. Enjoy the ride, Mariners fans.

Coming in at number three on the Mariners top five list is outfielder Kyle Lewis. The Mariners selected Lewis in the first round, number eleven overall, in the 2016 Amateur player draft.

Lewis has many great qualities. He drives the baseball well to all parts of the field and provides a quality approach with his hitting. Regarding his fielding, Lewis has above-average IQ with his route running and instinctual nature. It compensates his average speed and makes him a solid defender.

With the knee injury he suffered a couple of seasons back, Lewis could find himself slotting into a corner spot to keep him as healthy as possible. He is a player to keep an eye on within the Mariners system, as just one season ago he was the teams’ number one overall prospect.

Slotting in fourth on the list is outfielder Julio Rodriguez. During the international signing period in 2017, the Mariners landed Rodriguez on a $1.75 million contract. At the time, Rodriguez was ranked ninth overall on MLB Pipeline.com’s Top 30 International Prospect list, and for a good reason.

Rodriguez is already quite advanced despite being just 18 years old. This past season, his first official professional season with the Mariners, Rodriguez slashed .315/.404/.525 with a way-above-average .440 wOBA and 161 wRC+. He finished with 5 home runs, 36 RBI, and 10 stolen bases.

For being just a kid, Rodriguez offers much upside and many solid qualities which will hopefully continue to translate in his climb to the show. His biggest strengths are his raw power and his arm strength, both above-average in their regard. He has a beautiful swing composition with the ability to bring the bat through the zone with ease.

Concerning the leather, Rodriguez does an excellent job with tracking and shows a good job in closing in on a ball to the outfield. He possesses above-average arm strength and displays accuracy in his throws. Rodriguez feels like a solid fit for the outfield at T-Mobile Park a few years down the road.

Rounding out the top five is the big right-hander from Stetson University, Logan Gilbert. Gilbert dominated at Stetson over three seasons, compiling a 2.48 ERA over that span and a ridiculous 11.24 K/9 rate. Gilbert was the Mariners number fourteen overall selection in this past year’s amateur player draft.

While at Stetson, Gilbert accrued time in the Cal Ripken League and the Cape Cod League. Over 12 starts between the two leagues, Gilbert posted a strong 1.71 ERA. Gilbert earned the Atlantic Sun Conference Pitcher of the Year in back to back years, 2017 and 2018 and was recognized as a 1st Team All American in 2018.

Watching Gilbert pitch, he possesses four above-average grade pitches, with his fastball being his highest graded pitch. The fastball sits in the mid-’90s but has been known to touch 97 mph. The slider is an impressive pitch, as is Gilbert’s changeup which scouts wish he would use more often. Plain and simple he has a great arm and can throw strikes consistently. His big 6’6” frame looms ominous, and for Gilbert, he is good enough to anchor a future rotation in Seattle for years to come.