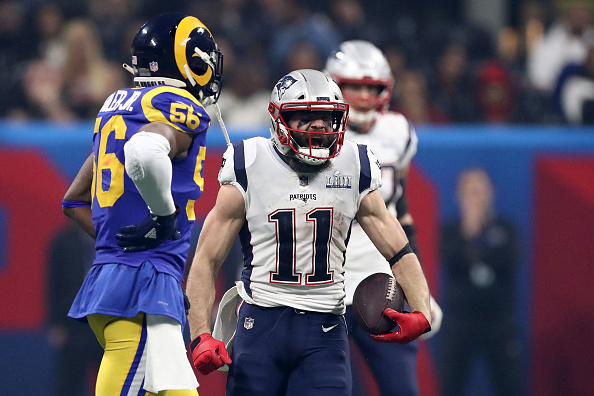 Julian Edelman took home Super Bowl LIII MVP after his astounding performance to lead his Patriots to their sixth Super Bowl victory in 18 years. He hauled in ten passes for 141 yards which were good enough to be the first receiver to be named MVP since Santonio Holmes won the award after his Super Bowl XLIII performance.

He’s second all-time in postseason receptions (115) and receiving yards (1,412), below only Jerry Rice. He also has the third most receiving yards in Super Bowl history, behind only Lynn Swann and Jerry Rice. Edelman also now has 13 consecutive playoff games with at least 5 catches. That’s not bad for a 7th round pick in 2009 out of Kent State where he was a quarterback with a total of one catch.

He has arguably been Brady’s best wide receiver ever. He has been the anchor of the Patriots wide receiver core for the last five seasons and has been Brady’s go-to guy, especially when Rob Gronkowski has been injured for parts of the last five seasons. Edelman has a chance, if he continues to produce in the way that he has, to be a Hall of Fame candidate when his career is over. Especially because he elevates his game to another level in the postseason. It’s incredible what he has done, and he was the only player who could’ve gotten the Super Bowl MVP. He may have an even more elevated role next year if Rob Gronkowski decides to hang his cleats up from being battered and bruised throughout the last few seasons. I wouldn’t doubt if he transforms into a top 10 WR next season, even though he will be 33, especially if Gronk retires. It’s unprecedented how much he has improved in the last five years alone. It’s exciting to see how he’ll improve next year as the Patriots go for yet another Super Bowl.

Hope you all enjoyed!!!