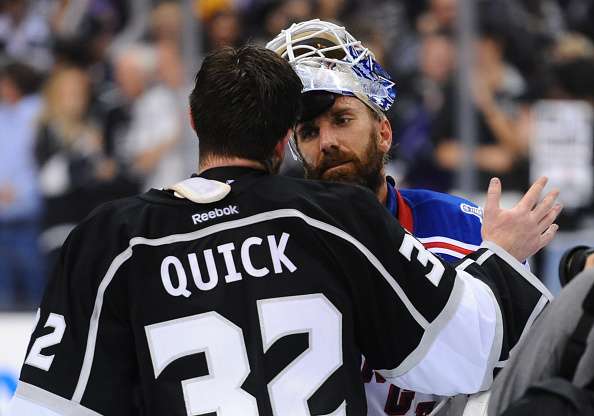 Tonight, we will see one special game in the NHL. The New York Rangers are hosting the Los Angeles Kings at the Madison Square Garden. At first glance, you would maybe think, that it’s not an attractive game at all. You would be probably right. Both the Rangers and the Kings are far away from the playoff contention. However, they played together in the Stanley Cup finals from five years back. Those times seem to be long forgotten by both fanbases.

A dream final between Los Angeles and New York, not only two big hockey markets, but two huge markets in general. Although that Stanley Cup finals series featured just five games, it was quite magnificent. But as it seems right now, neither of these two will be able to make another Stanley Cup run for a long time.

In that series, the Kings prevailed in five games. They required three overtime victories on their way to the Cup glory while making comebacks in each of those games at Staples Center. Every Kings fan, and sadly for them, every Ranger fan as well, remembers Alec Martinez scoring from the rebound in double OT of Game 5 to beat Lundqvist and win the Stanley Cup.

What happened with the Kings?

By winning the Stanley Cup in 2014, the Kings won their second Stanley Cup in three years. In 2012 they won the Cup while dropping just four games on their way going for the win. In 2013 they fell short in the Western Conference finals against the Chicago Blackhawks. There was a hope for Los Angeles that they might be building a dynasty and could shoot for another Stanley Cup banner in the coming years.

However, the Kings missed the playoffs the very next year after their Stanley Cup glory in 2014. They came back much stronger in 2016, but couldn’t make it past the San Jose Sharks in the first round falling in five games rather clearly. LA missed the playoffs in 2017 as well, before making an unsuccessful return last year. A newcomer to the League, the Vegas Golden Knights, won their first-ever playoff series embarrassing the Kings and sweeping them in the first round.

Since Alec Martinez scored that game-winner in the second overtime of Game 5 against Henrik Lundqvist in 2014 Stanley Cup finals, the Kings have won just one playoff game. And it’s almost five years now. The Kings currently trail the eighth-place team in the Western Conference by 10 points. Making the playoffs isn’t something achievable for them as it stands now.

In that 2014 Stanley Cup run, Marian Gaborik contributed with 14 goals. The Kings signed him for seven-year contract extension afterward, as they surely regret that signing now. Gaborik was traded to the Ottawa Senators last season. Veterans like Justin Williams or Mike Richards scored other huge goals for the Kings. Richards had his own problems and Williams walked away as a free agent in 2015. Only Anze Kopitar has seemed to always contribute for this Kings team, meanwhile, other important pieces like Tanner Pearson, Tyler Toffoli or Dustin Brown fell off ever since that Cup run.

Brown was demoted from being a captain on the Kings team and replaced by Anze Kopitar. Pearson was traded last November to Pittsburgh and Toffoli is rumored to be dealt as well. From the defensive structure, similarly to Mike Richards, defenseman Slava Voynov had his problems too. Alec Martinez is on the trade block and Jake Muzzin was traded just a few days ago. Dwelling solely on Drew Doughty hasn’t helped the Kings. Willie Mitchell and his veteran leadership on the back-end is missing too.

What happened with the Rangers?

Although the Rangers won more than one playoff game since that Stanley Cup Final in 2014, they still have no Cups to show for it. The Rangers won the President’s Trophy in 2015 and were poised to win the Stanley Cup, but fell short in Game 7 at MSG in the Eastern Conference finals against the Tampa Bay Lightning. One season later, the Penguins trashed them in the first round of the playoffs in five games.

The Rangers were hoping and fearing too that 2017 might be their last realistic chance at the Cup in a while. They seemingly went all-in, defeated the Montreal Canadiens in the first round, but then once again experienced playoff failure with not being able to eliminate Ottawa in the second round. As much as the Rangers fans remember those three games at Staples Center from 2014, it appeared to repeat in those three games played in Canadian Tire Center in Ottawa in 2017.

Nevertheless, it really was their last chance. In the past season, they missed the playoffs for the first time since 2010. Trailing the eighth place in the Eastern Conference by eight points as of now, it doesn’t seem bright for them either. The Blueshirts are set to miss the playoffs in back-to-back seasons.

Much has changed in the Rangers organization since that 2014 Stanley Cup Final against the Kings. Only Mats Zuccarello, Henrik Lundqvist, Chris Kreider, and Marc Staal remember that series. Almost half of that squad has gone to Tampa Bay, Brian Boyle, captain Ryan Callahan, defenseman Anton Stralman. Later on, next captain Ryan McDonagh and Dan Girardi went to Tampa Bay too. The Rangers made huge changes with trading leaders like Derick Brassard or Derek Stepan.

Both the Rangers and the Kings were trying to accomplish a rebuild on the fly. This has almost never proved to be a good idea. The Rangers had more chances to win the Stanley Cup since 2014 than the Kings. Notwithstanding, last year before the Trade Deadline, the Rangers finally admitted they are in the full rebuild mode. That Rangers appear to have beneficiated from that move.

On the other hand the Kings never really admitted they find themselves in a rebuild. They even signed Ilya Kovalchuk last summer, who wanted to win the Stanley Cup on his return to the NHL. Better assessment of the situation resulted in the fact that the Rangers now have seven points more than the Kings and they also seem to be closer to the success in the future than the Cup winners from 2014.

Now both clubs are meeting again. Their main and sole focus is on the present and the future. In order to have another head-to-head clash in the Stanley Cup finals, there has to be a lot of work done on each side.