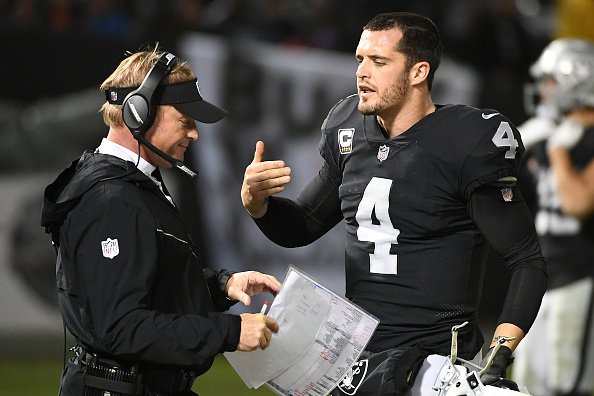 It all began in January of 2018 with the re-hiring of the offensive mastermind-Jon Gruden. He replaced the dismissed Jack Del Rio and everything seemed to be headed on the up an up in Oakland, at least that is what everyone expected.

Over before it started?

In the early springtime, the Silver & Black’s brass decided to go the inexpensive route in free agency. Jordy Nelson, Doug Martin, Tahir Whitehead, and Rashaan Melvin were brought in to add veteran help to their respective positions. During the draft, they surprised in the first round by selecting UCLA OT Kolton Miller to the disbelief of almost everyone. It continued with a trade for WR Martavis Bryant from the Steelers and the picks of Arden Key and Maurice Hurst who both had major questions entering the draft. Although Hurst provided a spark with 4 sacks in his rookie year and will be relied on heavily in the not so distant future.

Then the team kicked off training camp in July with its most valuable performer unavailable. Khalil Mack wanted to be paid with the largest contract for a defensive player in NFL history. Unfortunately, on September 1st the Raiders did the unimaginable by trading their once-in-a-generation talent to the Chicago Bears. It shook Raider Nation to its core. A week later the season began and Oakland was rolled at home by the L.A. Rams 33-13, while Mack proved his worth instantly in Chicago’s loss to Green Bay in a memorable Sunday Night thriller. The social media reaction to Mack’s play was off the charts and continued to grow, as did Mack in Chicago’s stifling defense. Mack and the Bears won the NFC North and are prepared to make a Super Bowl run sooner rather than later.

Halfway through the tumultuous year, Amari Cooper was dealt to the Cowboys for a first-round draft choice. Cooper only managed 22 grabs for 280 yards and a score while wearing the Silver & Black uniform in 6 games. In Dallas, he finished with 53 catches for 725 yards and 6 touchdowns. Cooper helped lead his new organization to the divisional round of the playoffs where they were upended by the eventual NFC Champion Los Angeles Rams. He, along with his teammates are on the verge of possibly becoming a perennial power in the always nasty NFC East and the conference as a whole.

Both trades will go down as two of the most memorable deals in franchise history. Mack’s absence in Oakland sent shockwaves and will continue to provide more in the 2020 draft and beyond. While Cooper’s trade can be argued that it should help the Raiders in the long-term and healed the sting of losing Mack just a bit. Whoever the decision makers choose in the upcoming off-seasons will surely have lofty shoes to fill to build for Las Vegas and whatever else comes to fruition in the near future.

Oakland finally got on the scoreboard in the win column with a controversial overtime triumph against a pesky Browns club in week four 45-42. They collapsed in the next 5 outings by being embarrassed on national television to Seattle and a third-string quarterback (Nick Mullens) of San Francisco. In week 11 though, Gruden’s tutelage appeared to have finally paid dividends. The Raiders were successful in Arizona on a last-second field goal by Daniel Carlson who turned a corner in his career after being dumped by Minnesota. After that Gruden’s squad looked like a capable one for the rest of the way by winning 2, while competing in others.

The Silver & Black went on to upset Pittsburgh in its best victory on the schedule 24-21. Two weeks later they put the nail in the coffin of Vance Joseph by costing him his job after humiliating Denver in a complete team performance. Meanwhile, Derek Carr was ridiculed constantly in the losses even though he quietly put together a decent campaign by going 10 contests without throwing an interception. Carr also recorded career highs in completions, yards, completion percentage and yards per attempt. This occurred all while having 2 rookie tackles and a very banged up line protect their centerpiece for parts of each game. He’s now on the watch list to see if Gruden believes he is the gunslinger the entire organization needs him to be going forward.

The calendar has now turned to 2019 and the Raiders have an immense amount of optimism with the offseason about to get rolling. Mike Mayock will get his shot to throw his knowledge into the ring by taking over for the fired Reggie McKenzie as gm. Mayock and company have countless reasons why the Oakland Raiders are on the rise by marching into the postseason with everything an NFL team could want. Over 70 million expected in cap space and 4 of the first 35 picks in a defensive heavy draft. The once bumpy journey ahead seems to look a lot brighter than the stars in the sky with so much hopefulness on the horizon.