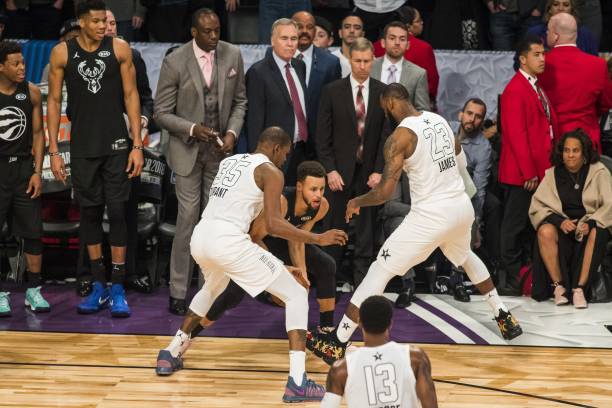 As a basketball fan, I’ve always found the NBA All-Star Weekend to be one of the more interesting times of the year. It allows me to watch the top talents of the league play without putting me in a position to seriously root for or against either team. It puts all of the league’s best players in a one-game situation where it’s the best of the best against the best of the best. It immortalizes otherwise-forgotten players such as Jason Kapono and Jeremy Evans through the Three-Point Contest and the Slam Dunk Contest. But perhaps the most important thing it does is recognize, in a semi-official capacity, who the best standout performers in the NBA are in any given season.

Last night, the All-Star Game rosters were finalized, which means we’re getting closer to that time of year again, so let’s take a look at some of the players we’ll see take the court on February 17. Specifically the ones from the Western Conference.

But since this is a sports site, not an English lesson, I should probably talk about basketball.

Tobias Harris is the one player that didn’t end up on the team where I have no doubts that he deserved a spot. He’s leading a team that’s starting Avery Bradley (expect an article about his fall from grace soon) to a playoff spot when most people didn’t give a shot at playoff contention at the start of the year, and he’s doing that on 21.2 points per game and 7.9 rebounds per game while nearly on track for a 50-40-90 season. That deserves recognition. It’ll be a crime if he never gets an All-Star appearance under his belt.

Defending Defensive Player of the Year winner Rudy Gobert should also be surprised to receive another snub. With career highs in scoring and rebounding, plus an improvement over last season in terms of offensive efficiency (which has led to him, so far, leading the league in field goal percentage), Gobert’s play has helped lead Utah back into a playoff position with nine wins in their last 11 games after a rough start to the year as a team. Advanced stats also favor him, as he leads the league in win shares and places in the top ten in just about every other advanced stat.

Other players who are probably sitting on their couches confused as to why they aren’t currently booking a flight to Charlotte include rookie sensation Luka Doncic, Steven Adams, Jrue Holiday, and Devin Booker.

The Ones We Already Know About

LeBron James is a captain, and the rest of the starters from the West are filled out with Warriors teammates Stephen Curry and Kevin Durant, potential back-to-back MVP James Harden, and Paul George. No shockers there; the only thing mildly surprising is George making it over Anthony Davis, but the Pelicans are currently 13th in the West, and that’s a problem.

To be fair, it was the second-biggest news of the evening, behind Kristaps Porzingis‘ move to Dallas.

Davis obviously made the list, although it’s unknown whether he’ll still be in the Western Conference by the time he suits up for the All-Star Game. After how quickly New York made a move this week, he must be even more frustrated with his situation now.

Russell Westbrook and Damian Lillard were also always going to be locks to make the team. Both divisive players among public perception who both were surprisingly sent home after the first round of the playoffs last year, the two California-born score-first point guards have both helped lead their respective teams to be on track for homecourt advantage in the playoffs.

There were some worries initially that Nikola Jokic might be left outside of the team, but there never should have been. He’s been one of the most impressive players in the entire league this year, especially when you consider the position he’s led the Nuggets to. They seem like the one legitimate potential threat to the Warriors’ dominance among Western Conference teams. This is his first All-Star appearance, and the Nuggets’ first contribution to the All-Star Game since Carmelo Anthony in 2011, two days before he was traded.

The fact that the Spurs are a playoff team this year absolutely convinces me that Gregg Popovich is a warlock. It’s the only explanation. DeMar DeRozan isn’t quite Kawhi Leonard, obviously, and LaMarcus Aldridge should probably be declining by now. That’s not happening though. Aldridge is huge for this team, and it’s great to watch them succeed despite including last year’s third-string point guard, an undrafted role player, and a former high-flyer without an Achilles Tendon in their starting lineup. Does Aldridge deserve his seventh All-Star game more than everyone who was left out? I’m not sure, but he’s more than earned his right to continue to be in the conversation.

Karl-Anthony Towns may not be the most beloved player in the league this year, in the aftermath of the whole Jimmy Butler situation. His team’s still not a playoff team, and Towns and Andrew Wiggins were supposed to have this team in contention by now. I don’t blame you if you consider him to be a bit of a disappointment. But he’s quietly undergone a transformation in these last couple years that has seen him go from a defensive liability to a legitimate threat on both sides of the ball. While I personally would have preferred to see Tobias Harris or Rudy Gobert have made their first All-Star Game, he deserves this recognition too. There’s just too much talent in the West for everyone to make it who should.