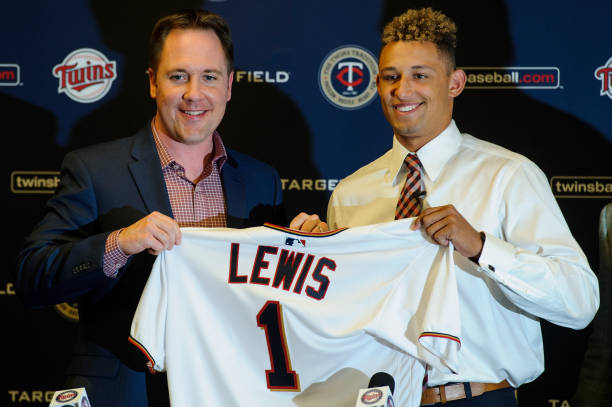 The Minnesota Twins have drafted well and it shows. Coming into 2019, the Twins Minor League system ranks as the 6th best farm system in baseball and is headlined by three Tier 1 Prospects who are destined to take the league by storm. The Twins have a bright outlook and their homegrown talent may put them in contention sooner than expected.

Royce Lewis, currently ranked #5 on MLB’s Top 100 Prospects List, shot up draft boards his junior year of High School after winning Los Angeles Times Baseball Player of the Year honors and taking MVP in both the Under Armor All American Game and the Perfect Game All American Classic.  In his Senior season in 2017, he won California’s Baseball Gatorade Player of the Year and was drafted #1 overall by the Minnesota Twins for $6.725 million. He played mainly outfield but switched to shortstop his senior season.

Lewis has shown to be a patient and well-rounded hitter, being, that his walk rate has increased at all stops in the minors while maintaining a sub 20% k rate. He consistently barrels the ball up and should add power as he further develops. With a projected plus hit tool and elite plus-plus speed that some scouts call 80-grade, it’s not hard to see why the Twins are excited about this kid.  Some scouts are concerned about his range at shortstop and think a move to the outfield is imminent, but the Twins have made it clear the position is his when he’s ready. Lewis is a five-tool player and could be the next crop of great baseball players.

Alex Kirilloff, currently ranked #9 on MLB’s Top 100 Prospects List, hit .563 his senior year of high school and went 8-0 with a 0.74 ERA as a pitcher. He would play in the Perfect Game All-American Classic that summer and win the games Home Run Derby. He was later drafted 15th overall by the Minnesota Twins in 2016.

In his first exposure to professional baseball, Kirilloff would hit .306/.341/.454(.794 OPS) 7 HR 33 R 33 RBI in 232 plate appearances, which would earn him Appalachian League MVP Honors in the Rookie League.  But his season was cut short after finding a tear in his elbow, which forced him to have Tommy John surgery and would miss the entire 2017 season.

Kirilloff projects to have a plus hit tool, which is apparent from his .335/.377/.541 (.918 OPS) in 793 plate appearances in his minor league career.  He continues to barrel the ball on a regular basis and should grow into his projected plus power. Kirilloff makes consistent hard contact to all fields and has shown the ability to take walks while keeping his strikeout rate under 20%. Kirilloff should move quickly through the Twins organization and could push their hand in 2019 if he continues this violent pace.

Graterol has electric stuff as his fastball sits in the high 90s and can reach triple digits, all while projecting as a plus-plus offering.  He throws both a curveball and a slider, while his slider projects to be a plus offering and a potential put away pitch. His changeup is well behind his two breakers but has the potential to be a league average pitch with a little development.

Graterol is more of a control pitcher, which is evident with his 2.47 BB/9 throughout his five stops in the minors so far. But his 10.5 K/9 throughout his minor league career has the Twins excited about his long term potential and they think he could become one of the best pitching prospects in baseball.

Nick Gordon is not an uber-prospect but does carry a high floor with his projected plus hit tool and ability to hit for average.  While he only carries average speed, he has shown a willingness to swipe bases in the lower levels of the minors, averaging 17.5 stolen bases per year from 2014 to 2017.  Of his 70 stolen bases in that span, he was caught stealing 35 times, or a 66% success rate. If you can’t steal bases in the minors, you will be completely ineffective in the majors.  Even if he can’t swipe many bags in the bigs, he still projects to hit for average and should give the Twins plenty of scoring opportunities.

Stephen Gonsalves was drafted in the 4th round by the Twins in the 2013 amateur draft. His first action came in the Gulf Coast League, where he would finish the season with a stellar 0.95 ERA 1.02 WHIP 12.5 K/9 in 28.1 innings and 8 starts across two levels.

Gonsalves possesses an above average fastball with the potential to be a plus pitch while sitting in the low 90s. His breaking pitches project as average secondary offerings, while his changeup is already a plus pitch that he can keep low in the zone. The Twins bullpen may be in for a huge workload in 2019 since their rotation does not look promising on paper. Gonsalves projects as a solid mid-rotation starter and one we could in 2019 if current starters underwhelm.

(All graphics courtesy of Minor Graphs at Prospects Live)