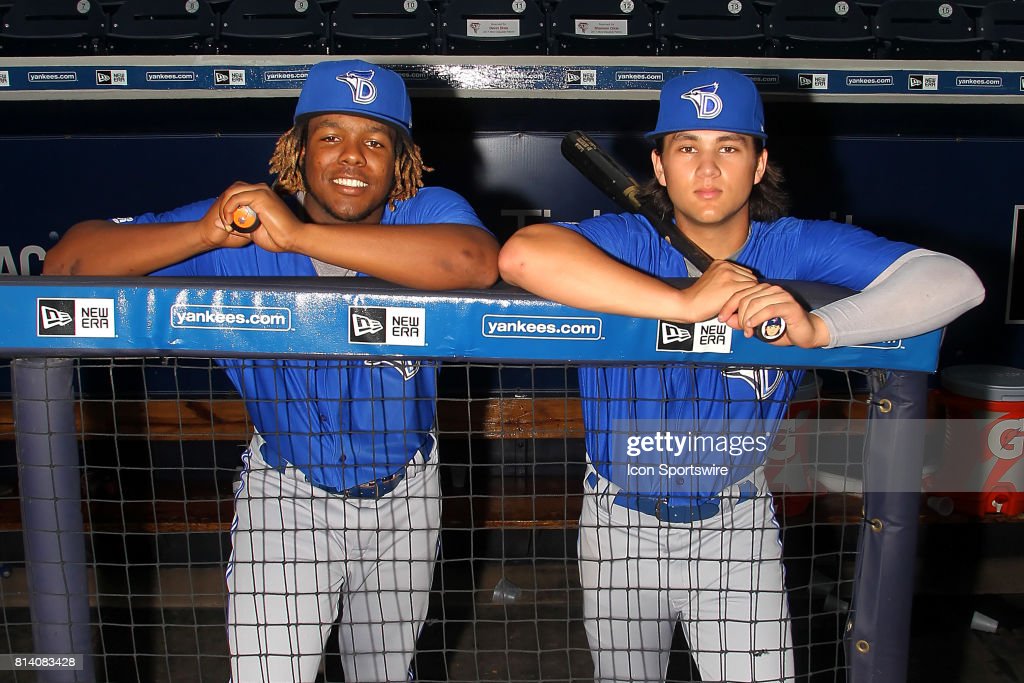 The Super Bowl is a mere week away. While many are getting excited, it means spring is just right around the corner. Most importantly, it means pitchers and catchers and the official kick-off of spring training.

Each year, teams converge in both Florida and Arizona for their respective preseasons. It also means one thing: prospects. While many prospects will not see time facing major league competition outside of spring training, it gives executives and fans alike the ability to see what teams have and more importantly, who.

The Toronto Blue Jays harbor one of the most impressive young prospect cores in the game. Their top ten system across the league boasts some exceptional young talent. Their future is certainly bright.

What about Vlad haven’t baseball fans heard? Named the top prospect on MLB Network’s Top 100 list for 2019, Guerrero Jr. continues to make waves across the game. After signing with the Blue Jays a long way back in 2015 for a whopping $3.9 million at the age of 16, Guerrero Jr. has been making a mockery of the competition at every level.

Over the past couple of seasons, Guerrero Jr. has worked his way up the ladder. It has certainly shown how unbelievable his talent and skill for the game have become as last season at Triple-A Guerrero Jr., just obliterated the highest possible minor league level. During his 30 game stretch, Guerrero Jr. slashed .336/.414/.564 with a .428 wOBA and 175 wRC+. To say he is ready for the next level is an understatement.

Guerrero Jr. possesses top of the line raw power, has phenomenal hand-eye coordination like his dad and continues to work on making his defense smoother, considering his lack of speed and overall quickness. It is no surprise Vladimir Guerrero Jr., is the Blue Jays top overall prospect.

Another son of a former big league All-Star and all around outstanding talent, Bichette has displayed a great deal of unwavering talent in his regard, away from the shadow of his father.

Bichette heard his name called in the second round of the 2016 amateur player draft, selected 66th overall. Bichette possesses excellent raw talent and power and should be a future All-Star, if not more.

As Bichette is still only 20 years old, the likelihood he reaches the majors in 2019 is not very high, and that is completely fine. Similar to Guerrero Jr., Bichette has trucked through each level of Minor League Baseball. For example, Bichette posted a triple-slash line of .286/.343/.453 with 11 home runs and 74 RBI.

The most impressive thing about Bichette is how he has suddenly found his speed once again. Bichette increased his stolen bases from 10 in 2017 to a whopping 32 last season. He posted a .355 wOBA and 120 wRC+ while at Double-A.

Bichette will likely start back in Double-A with the high likelihood he moves to Triple-A at some point in the upcoming season, sooner rather than later many would presume. For Bichette, he possesses many impressive qualities. The ball jumps off the bat when Bichette turns around on a pitch. His hard contact from foul pole to foul pole is something which excites fans and something Bichette will continue to be better. He is the team’s number two prospect through and through.

Danny Jansen comes in at number three on this top five list. Jansen was the Blue Jays 16th-round selection back in 2013, however, is still just 23 years old. For Jansen, there have been some nice positives.

Last season, Jansen saw some time with the major league club, totaling 31 games with 95 plate appearances. He finished with a triple-slash line of .247/.347/.432 with a solid .340 wOBA and above-average 115 wRC+. He struck out at under a twenty percent clip.

As Jansen came directly out of high school, his development has been something serious for the Blue Jays. Now that Russell Martin has reunited with the Los Angeles Dodgers, it could be the year for Jansen.

While his defense struggled in his first major league stint, the lengths Jansen has gone with his framing, blocking, and receiving have been given notice as they are continuing to become better. Jansen possesses a relatively quick pop time which allows him to continue to develop his ability to catch runners. The Blue Jays should give him a legitimate shot this season and see what kind of return Jansen provides.

Fourth on the list is Kevin Smith, whom the Blue Jays drafted in the 4th-round of the 2017 Amateur player draft. Smith now has two professional seasons under his belt and has seen a mixed bag of results.

Smith possesses top of the line raw power and has a nice smooth swing through the zone. His ability is developed from his lower body, as he drives with power. Smith found his power in 2018 at Class A Advanced, as he hit a career-high 18 home runs. While Smith is not a big guy, power is still apparent. He should provide as a solid bat in the big leagues.

To round out the top five, we look at right-handed pitcher Nate Pearson. Pearson was the Blue Jays first round pick in the 2017 Amateur player draft, number 28 overall. He is a big guy, standing in at 6’6″, 245 pounds.

Pearson gives off a vibe similar to Tyler Anderson of the Colorado Rockies. A small finish in Pearson’s delivery mirrors that of Anderson with the slight toe tap in his drive toward the mound.

Pearson does not possess much experience yet, as his debut for Class A Advanced Dunedin was cut short this past season after he suffered a broken ulna. In 19 innings at Class A the year before, Pearson posted a ridiculous 0.95 ERA and 35.8% strikeout rate.

Pearson does possess the strongest fastball and slider mix in the teams’ system, and can consistently hit 97-98 mph on his fastball. The slider has grown with Pearson as it ranges in the upper-80’s as a solid put away pitch. He ranges, at the top of his game, as a future number three or four starter. Here is to a healthy recovery and a solid return for Nate Pearson.

The Transformation of the New York Islanders