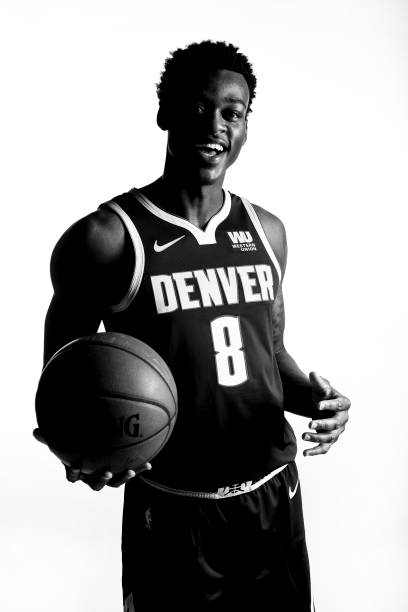 A huge ovation ensued from the remaining crowd at the Pepsi Center with 3:53 to go when word came over the PA saying: “Checking into the game, please welcome number eight, Jarred Vanderbilt.” This was his first action in 5-on-5 basketball since last February. 329 days ago. “I know he did not play until the end of the game and it was well in hand, but Jarred was really nervous about playing,” head coach Mike Malone explained. “He hadn’t played since last February. For him to get over that fear and to go out there and have three or four impactful minutes — I mean, that pass he made was an incredible pass — he showed you that in three minutes and 53 seconds he gets you three rebounds — he is a rebounding machine. I am happy he got those first-game jitters out of the way.” Vanderbilt finished his almost four minutes of play with one incredible assist in transition to Malik Beasley, he showed off his highly touted rebounding ability wrangling in three rebounds and the most important of all the stats, he scored his first career point, going 1-2 at the free-throw line. Vanderbilt summed it up saying “It was just amazing to get back out there and start playing again.”

Let’s rewind a little. Vanderbilt was a 5 star recruit out of high school and committed to the University of Kentucky. He’s known to be injury prone, but everyone has been able to see his potential, especially on the defensive end and that’s what made him a such a valuable pickup for Kentucky. Except he was just going to be another one-and-done. After two injuries to his left foot early in the season and a sprained left ankle that capped his freshman year, pro scouts only got to make their evaluations of him in 14 short games. In those games, scouts were formulating opinions. Mike Schmitz of ESPN said a combination of things like his skillset will not be able to translate to the NBA because his offensive skill set is limited and he doesn’t have a jump shot. He said that “If I were [Vanderbilt], I would definitely consider coming back to school, just to put together a full year of production and improve his offensive game.” Low and behold, Jarred did come out after an injury-plagued freshman season. He got drafted 41st overall in the 2018 draft by the Denver Nuggets.

Unfortunately, before the season started, he had to undergo surgery on his right foot. With the way the team has approached injuries this year, there was no chance Vanderbilt was going to see the court until he was more than 110% healthy. Finally, after 46 games, he got to 110% healthy and was activated for the first time. The question remains, where does Jarred Vanderbilt fit with this team?

First of all, he has played 5-on-5 basketball for just 3 minutes and 52 seconds. He is nowhere near as in shape as he needs to be. After his first game against the Suns, he was sent to the G-League to play for the Delaware Blue Coats. “I think, right now, the plan is to send him to the G-League and let him play, not just three minutes, but let him play meaningful minutes,” Malone said pertaining to the near future of the 19 year old rookie. The problem for him is that there doesn’t really seem to be a place for him in the rotation, with the rotation being pretty much set with Paul Millsap and Will Barton starting at the forward positions. Torrey Craig and Trey Lyles seem to be solidified as the bench guys at forward. So unless there is an unforeseen trade that is made before the deadline, Vanderbilt will likely stay in the G-League for the remainder of the year.

Going forward, looking to next year and beyond, this kid has tons of potential. Where he is going to make his name is on the defensive end. You saw small glimpses of it in his first action forcing a steal and also grabbing 3 of 5 available defensive rebounds. His highest praises were for his rebounding ability and, as with his defensive IQ, you can definitely see glimpses of the tenacity on the boards. He needs to keep that up and supply energy defensively. The biggest thing for him is that he needs to develop more of an offensive game. If he can do that, he has the potential to be a Draymond Green type player. With the Nuggets not picking up the option on Tyler Lydon’s rookie contract, Vanderbilt will most likely be available on game days next season. Other options may be to move on from Trey Lyles or to go even bolder, move on from defensive anchor Paul Millsap. Just watching him play for the first time, you can see why he was a 5-star recruit out of high school and a coveted pickup for Kentucky and a potential first-round pick if he had stayed healthy. He has the ability and we are all excited to see what he can do going forward.