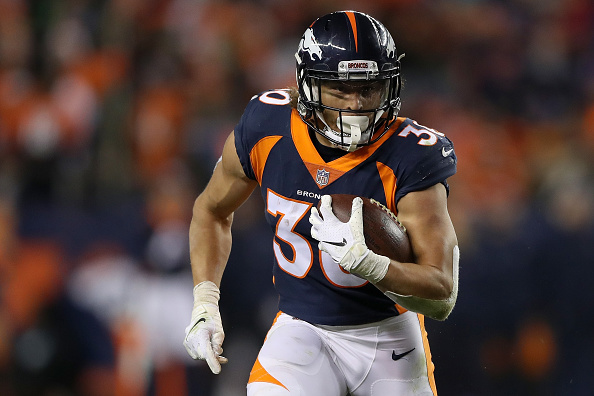 Three years after their Super Bowl 50 victory, the Broncos are in the same situation they were before Peyton Manning chose to sign with them. The Denver Broncos finished at home with a very weak 23-9 loss to the Los Angeles Chargers. Finishing up the season 6-10, and clinching it’s first back-to-back double-digit loss season since 1967. They will be on a quest to regroup and find a way to get back to the playoffs.

Case Keenum signed a two-year deal as the Broncos decided to take a pass on the Kirk Cousins sweepstakes. Keenum could not regain that magic he had with the Vikings the previous year. Keenum was a relatively average quarterback for the large majority of the 2018 season, posting 3,890 yards, 18 touchdowns, and 15 interceptions.

Those 15 pickoffs were good for third last among starting quarterbacks. He still managed to be an upgrade over Trevor Siemian, Brock Osweiler and Paxton Lynch. While Keenum’s roster spot is likely safe, his starting job is not guaranteed and seems unlikely to get a contract extension.

Rookie running backs Phillip Lindsay and Royce Freeman controlled the Denver backfield, combining for 1,558 yards and giving the Broncos their most potent ground attack since Portis rushed for 1,591 yards in 2003. They seemed to have struck gold with Lindsay signing him as an undrafted free agent this past May.

He became only the third undrafted rookie to eclipse 1,000-yards rushing and was the first ever undrafted offensive rookie selected to the Pro Bowl. Royce Freeman and Devontae Booker were role players for the Broncos’ backfield, with Freeman being the main power back. Freeman will be looking to see more playing time next season.

Moving on from Demaryius Thomas, this past season and dealing with an aging Emmanuel Sanders recovering from a torn Achilles this offseason. The Broncos selected two potential building block receivers this last years draft in Courtland Sutton in the 1st, and DaeSean Hamilton the 4th.

Courtland Sutton displayed flashes, once they traded away longtime receiver Demaryius Thomas to Houston, but he wasn’t able to continue to produce the way he had once Thomas was gone. There’s still plenty of reason to believe Sutton could develop into a strong No. 2 wideout, with the potential to fill the wide receiver 1 spot, should Sanders decide to hang them up or isn’t recovered for next season from his torn Achilles.

DaeSean Hamilton didn’t do much of note for a good portion of the year, however, once Thomas and Sanders were out of the picture, Hamilton began to bloom. Posting over 5 receptions in three of the last four games, and at least forty yards in each of those games. Can both of these young players build on their solid rookie campaigns?

There is still some good talent on this Broncos defense. With young players such Bradley Chubb, Adam Gotsis, and Shelby Harris. Not to mention Von Miller, who is still playing really top notch football. Bolstering the cornerback position could also be a good investment. Chris Harris Jr was superb when he was healthy, he has been one of the top cornerbacks in the league over his eight-year career but was limited to 12 games. There is not enough of a lockdown threat aside from Harris, and that certainly showed when he was on the shelf.

The team decided to cut the cord with former head coach Vance Joseph. Joseph wasn’t left on the scrapheap long, as he just signed on with the Arizona Cardinals, to be their new defensive coordinator. Elway replaced him with Chicago Bears former defensive coordinator Vic Fangio, he will get his first opportunity at a head coaching job in Denver.

There was no denying that they needed to bring in an experienced coach with a proven track record, Fangio certainly fits the bill, having started in the NFL as a linebackers coach back in 1986 with the New Orleans Saints. He was also a defensive coordinator with the 2000 Baltimore Ravens. After working in the NFL for over thirty years, most of those years in a defensive capacity, to suddenly switch to the position of head coach, it’s certainly a roll of the dice on the Broncos side of it. It’ll be interesting to see how he performs.

Targeting a free-agent quarterback is made that much more difficult by Case Keenum‘s $7 million dead cap hit. Should the Broncos decide to go after a quarterback in the offseason, they would be wise to do it through the draft.

Draftees such as Ohio State’s Dwyane Haskins and Missouri’s Drew Lock should be two quarterbacks that Denver look at taking. Based on Denver’s 6-10 finish in 2018, the Broncos will have the tenth selection in the draft. This will be the first time that the Denver Broncos will be selecting tenth overall. If they can build on last years solid draft, it can go a long way toward improving the team’s outlook.

Drew Lock, Mizzou – Physically, Lock has ideal NFL size. Athletic and can extend plays with his feet, his overall athleticism and speed are serviceable. He completed 883 throws for 12,193 yards, 99 touchdowns and 39 interceptions at Missouri. Often compared to Jay Cutler, in that he possesses the gifted arm strength with the ability to throw bombs all over the field.

He is also prone to firing dangerous passes into tight windows, that end up turning into unnecessary turnovers. Like any true gunslinger, they’ll need to take the good with the bad as far as his arm strength and decision making go.

Dwayne Haskins, Ohio State – With Justin Herbert returning back to school next year, there’s a good chance that Dwayne Haskins could be the first quarterback taken in the 2019 draft. He is a natural pocket-passer with solid vision, who gets rid of the football quickly and with accuracy.

While he isn’t a classic dual-threat quarterback, he has serviceable mobility. Most notable is the arm strength, the ceiling will be based on whether or not he can show improvement on his long ball accuracy.  If Haskins can do that, then he could be a true franchise player.

Deebo Samuel, South Carolina – This wide receiver class looks to be full of talented names.  Big-bodied receivers like Kelvin Harmon, D.K. Metcalf, and N’Keal Harry have been getting a lot of the press, but Deebo Samuel is not a player, the Broncos should sleep on.

A smooth and polished route runner, that knows how to manipulate corners immediately at the snap and separate, although he will not destroy anyone with straight speed. The Broncos can use him in multiple ways, as he’s played both on the perimeter and in the slot and can be productive in both areas.