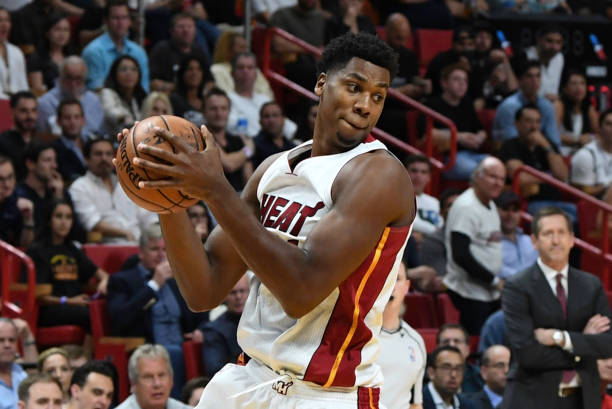 Here are my four takeaways from the Miami Heat‘s 107-99 loss to the Boston Celtics.

Monday night wasn’t a great one for the Heat’s starters. The Boston Celtics starters outscored the Heat’s starters 84-33. Yes, by over 50. Heat starting guard Josh Richardson was the only starter to score in double figures (11 points). The rest of the starters–Justise Winslow, James Johnson, Rodney McGruder, and Hassan Whiteside–combined to go 7 for 19 from the field and finished with just 22 points.

Changes in starting lineup are clearly needed when Miami returns home to face Clippers on Wednesday.

Last week, Dion Waiters was venting about his lack of playing time. The past two games, he has had back-to-back strong performances off the bench. He’s been making plays for others and finishing strong at the rim, an area he’s improved on. Waiters finished the night with 18 points on 8-of-16 shooting from the field.

Tonight's 2nd quarter was played on #WaitersIsland! 🌴@DionWaiters3 played every second of the period and scored 9 points off the bench. pic.twitter.com/nMXUbuYOTA

At this point, he’s proven he should be more than an 11th man on the team. He should at least start over Rodney McGruder.

Another guy making his case for playing time is Derrick Jones Jr. He’s been impactful on both ends of the floor. While the Heat doesn’t run plays for him, he still finds a way to score by crashing the boards or cutting. On the other end, he uses his length to slow down opposing players. Jones Jr. finished with a career-high 18 points and nine rebounds.

While he claims he hasn’t received an invitation to the NBA’s Dunk Contest yet, don’t be surprised if he ends up participating in it. There are already rumors circulating around that he is.

Turnovers are becoming a big problem for the Heat again. The last few games, Miami has done a terrible job of holding onto the ball. Monday night, they turned the ball over 19 times, leading to 28 points for Boston. For a team that relies on its defense to fuel its offense, they cannot give up easy points in transition.