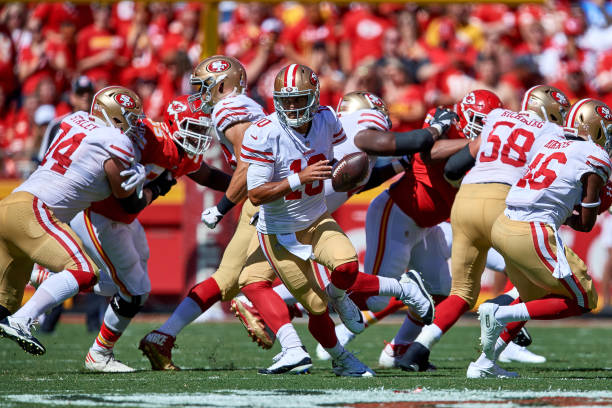 2018 was not the year 49er fans thought it would be. A potential playoff berth was in the discussion, not a 4-12 season that would be good enough for the second-worst record in the league. But if you are going to understand 2018, we will have to hope into the old DeLorean and head back towards the end of 2017.

In late October of 2017, right before the trade deadline ended, the 49ers set their second-round pick to the Patriots for Jimmy Garoppolo and he led the team to win their five final games, three of which were playoff contenders. I know you know the story, but it would send the offseason hype train into full force getting the hopes up of those who root for the Red and Gold.

The 49ers made a nice splash in free agency with the signing of Jerick McKinnon to a massive contract that did raise some eyebrows. But Kyle Shanahan knows how to utilize the running back position in his scheme and Carlos Hyde never really fit the mold of what Shanahan wanted. Some people were even worried about McKinnon’s size; guess what, he’s the same size as Devonta Freeman. And we all knew what Shanahan was able to do with Freeman in Atlanta.

The 49ers also made a surprising move on the offensive line when they signed center Weston Richburg and traded Daniel Kilgore to the Dolphins. But the biggest offseason acquisition was former Seahawks cornerback Richard Sherman. Sherman, coming off an Achilles injury, was not going to be brought back by Seattle, so he decided to jump ship to the rival team.

It was an obvious risk with high reward by signing Sherman. But the deal, with Sherman acting as his own agent, was a team friendly deal. Sherman had something to prove not only himself but also everyone else, that he still had it. The 49ers not only got the Pro Bowl future Hall of Famer on the field, but the mind of Sherman as well. The 49ers have a very young defensive back corps, and who better to teach them than Sherman.

The 49ers, who had the ninth pick in the draft and had a few holes to fill drafted…..…Mike McGlinchey? What? Why in the world did they draft him? Yes, Joe Staley is getting older and his replacement will need to be drafted eventually but there were other pressing matters to take care of.

In the second round, the 49ers would trade up into the draft and selected wide receiver, Dante Pettis. Pettis set an NCAA career record nine touchdowns on punt returns in his four years with Washington. They would then take Fred Warner in the third-round in what would end up being a much-needed pick.

Things were not all peachy keen in the offseason. General Manager John Lynch would end up facing the biggest hurdle of his tenure. Former first-round pick Reuben Foster not only facing a marijuana charge and a weapons charge, but a domestic violence charge as well. Lynch and the 49ers would get roasted in the media for not cutting Foster as soon as he was arrested, claiming that if he was not the talented player he was, he would have already been cut.

This may be the case; after all the 49ers had invested a lot in Foster and wanted to make sure they had all the facts straight before cutting a talented player. After all, innocent until proven guilty, right, isn’t that how it’s supposed to be?

Foster would be cleared of the charges but had to face a two-game suspension. Small price to pay for having our linebacker back. The team also made themselves very clear to Foster: do not step out of line. The Mercury News reported,

“We’d love Reuben to be on this team, and we’d love him to participate for us,” York told NBC Sports Bay Area. “But if he’s not doing things off the field that allow us to be able to rely on him – or he’s doing something that we’re not comfortable with off the field and it’s proven that’s what’s going on — I think the guys have said then you’re just going to have to move on.”

Foster would not heed the team’s warning when he was in Florida for their game with the Buccaneers in Week 12. Foster once was again arrested for domestic violence, and this time, Lynch wasted no time and cut Foster immediately following the arrest. He would not clear waivers and was picked up by the Washington Redskins, but would not play a single snap as he is on the commissioner’s exempt list, which prohibits him from practicing or playing with the team. The charges were later dropped by his on-again/off-again girlfriend Elissa Ennis.

The headache and distraction known as Reuben Foster are gone from the Bay Area, and hopefully this was a good lesson for the front office. No matter how talented the player is, sometimes the red flags are too much and you need to just walk away.

Not the Start We Expected

The season was not what we expected, and it got off to a bad start before it even got started. On the last play in practice right before the start of the season, Jerick McKinnon would tear his ACL. As Ralphie said in A Christmas Story, “Oh Fuuuuudddddge”. Kyle Shanahan said the entire game plan leading up to their first game with the Vikings, McKinnon’s former team, went through significant changes.

The 49ers would end up losing their first game in a tight matchup that had three Jimmy Garoppolo interceptions, one returned for a touchdown after Kendrick Bourne ran the wrong route. The offense did not look like we had all hoped for. During the 2017 season, Garoppolo won all five starts without knowing the full playbook and now he had the entire offseason to learn the Shanahan offense. I remember tweeting this quote a few times leading up to the regular season.

What can I say, I expected a lot more from the offense, but they sputtered in the next game against the Lions as well. They would end up winning, but just barely. But barely is still a win and maybe the 49ers would be able to build upon it. Another bright spot out of the game against the Lions was that 2017’s undrafted free agent Matt Breida broke out for almost 140 yards and a touchdown. It was looking like the McKinnon injury might not be big of a blow to the offense as we thought.

“All Gas, No Defense”

The lack of defense all year was such a frustrating aspect to the 2018 49ers. It was at the point where fans wonder if defensive coordinator Robert Saleh is the right man for the job and the jury is still out on that. But his “All Gas, No Brakes” saw a lot of missed tackles and open receivers this season. And I get schemes where you do things to confuse your opponent, but when I saw Solomon Thomas trying to cover Antonio Gates, all I could do is shake my head in disbelief. That play went for over 15 yards.

It was nice to see rookie Fred Warner step right into his role and help offset the void left by Foster. He will need some help – he cannot do it all by himself – but the 49ers seem to have nailed this draft pick. Thomas seemed to play better throughout the year as well when they played him in his natural position as an inside rusher. The 49ers were hoping to make him an outside rusher, but that was not his skill set – he is an inside rusher. When he was rushing from inside he was disruptive and drew some double-teams. If the team can address their lack of an edge rusher this off-season they can end up with a very good punishing defensive line.

Over Before It Began

In the third game of the season, the 49ers season ended before it really had a chance to get started. The offense led by Garoppolo was facing a 14-point deficit with less than six minutes left to go in the game. The offense, finally starting to get into a groove, was driving down the field for a score when Garoppolo made a cut trying to gain extra yards and his knee buckled.

“I felt a great disturbance in the Force. As if millions of voices suddenly cried out in terror and were suddenly silenced.” – Sir Alec Guinness, Star Wars: A New Hope (1977)

The injury would be confirmed as a torn ACL; all the hopes and dreams of the 2018 season flew right out the window. C.J. Beathard would once again take over as the starting quarterback for the 49ers, and, just as he had in 2017, he couldn’t win a game. In fact, he led the team into being swept by the Cardinals, who happen to have the first pick in the draft and fired their head coach after a one-and-done season.

C.J. Beathard injured his wrist against in the second Cardinals loss and that led to Nick Mullens starting for the first time in his career. Wait…..who is Nick Mullens? Mullens was an undrafted free agent in 2017 from the University of Southern Mississippi. Up until the Garoppolo injury, Mullens had spent his entire career on the practice squad.

His first start was a primetime game against their Bay rivals the Raiders. Mullens had full command of the offense that night and led the 49ers to their second win of the season. He was poised in the pocket, didn’t take a single sack or turn the ball over. It was a great victory and fun night for 49er fans. After the game, Mullens took a congratulatory phone call from a Brett Favre (ever heard of him?)

Shaking off the Seahawk Monkey

It was a hard-fought game that went into overtime. but Mullens and the 49ers would prevail, finally beating the Seahawks and getting that monkey off their back. This was their fourth and final win of the season after beating the Broncos the week before.

Speaking of the Denver game the 49ers won, George Kittle had 210 yards in the first half alone and was only five yards away from setting the record for most yards by a tight end. Unfortunately, he was completely shut out in the second half and he came up short on that record. But Kyle Shanahan would make it up to him in the final game of the season when he schemed every play on the final drive to give George Kittle the record for most yards by a tight end in a single season. Kittle would end up with 1,377 yards on the season, beating Travis Kelce who broke the record maybe 24 minutes prior, after he broke the record originally set by Gronk.

Kittle would also set the record for most targets and receptions for any 49ers tight end, beating Vernon Davis. Kittle earned himself second-team all-pro (second to Travis Kelce), and he did it with a second and third-string quarterback. The future is bright for Kittle and the 49ers.

The Future Is On The Horizon

2018 was not the year we had hoped for the Red and Gold and we may have set our expectations too high after the way the team ended in 2017. But the future looks bright for 2019. The offense has many weapons to build upon in Kittle, the offensive line, and hopefully a healthy Jerick McKinnon and Jimmy Garoppolo.

They have the second pick in the draft, which will hopefully address the lack of edge rusher for the 49ers. They will need to address the void left by cutting Foster in the linebacker corps, and hopefully, the defense can get back to what it did under Jim Harbaugh, and that’s punishing their opponents.