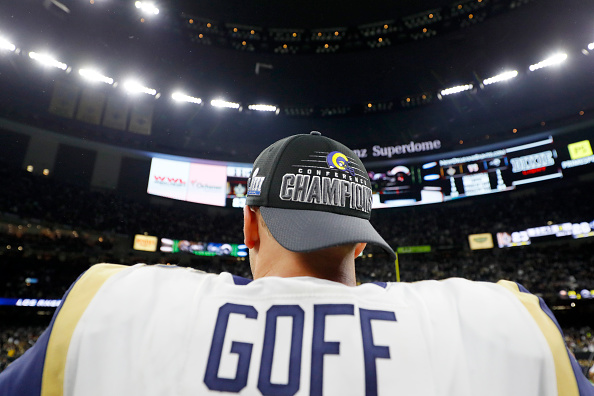 The Los Angeles Rams will represent the NFC as they will advance to the Super Bowl following their 26-23 win over the New Orleans Saints. This being a rematch of the top two seeds in the NFC who had already met in Week 9. It was a great game full of momentum swings and amazing plays but was not without its share of controversy.

The Saints played hosts to the Rams at the Superdome where their fans were relentless. There were multiple times in the game where it was clear Rams players beside each other could not hear one another. Saints faithful such as the infamous “whistle man” were in tow and made their presence felt.

You know why he’s here. pic.twitter.com/Y6eMLO4C8z

Rams quarterback Jared Goff spoke on the crowd noise during his post-game presser:

“It was a chaotic game. I think just the way the crowd gets into the game they definitely make an impact and did today. Utlimately we were able to overcome them.”

The momentum of the game was on the Saints side early. They got out to an early 13-0 lead over the Rams where it looked like the Rams might struggle to get things going. Particularly when considering the struggles of running back Todd Gurley.

Gurley was not able to really get into a rhythm throughout the game. He had four carries for 10 yards and one reception for three yards. He did punch in a pivotal touchdown in a game where every point mattered. Gurley did not see his normal volume of touches possibly due to two big drops early in the game. One resulting in Goff’s lone interception.

The Saints did its part to slow down the Rams rushing attack that had amassed 273 yards the week beforehand. This week they only had 77 rushing yards on 26 carries. In spots where the Rams ground game was not able to produce, Goff made plays for the offense.

He completed 25 of his 40 passes for 297 yards, one touchdown, and one interception. Goff had a 75.1 quarterback rating and an 83 passer rating. Goff did not play his best game but made key plays for the Rams when they needed them most.

Rams kicker Greg Zuerlein was arguably the most clutch player on the field. He came up with the game-winning 57-yard field goal in overtime. He made four out of four field goals and two extra points throughout the game.  Zuerlein was perfect all throughout despite the hostile environment.

Saints quarterback Drew Brees did his part to try and propel the Saints but fell short. He was 26 of 40 for 249 yards, two touchdowns, and one interception. Brees had a 60.1 quarterback rating and an 88.4 passer rating.

There were many memorable plays throughout the game but the most memorable one is also the most controversial. A no call on a hit from Nickell Robey-Coleman on Tommylee Lewis is the topic of discussion following the game. If it were called pass-interference or helmet-to-helmet, then the Saints would have had the ball at first and goal with 1:45 left in the game and the Rams having one timeout left.

It was a no call that could have entirely changed the complexion of the game. Rams head coach Sean McVay spoke on the play following the game:

It was a huge play in the game but only one of many. This win propels the Rams to their first Super Bowl appearance since 2001 when they were the St. Louis Rams but first as the Los Angeles Rams since 1979.

They will meet the New England Patriots to play in Super Bowl LIII which will be a rematch of Super Bowl XXXVI that the Patriots won.