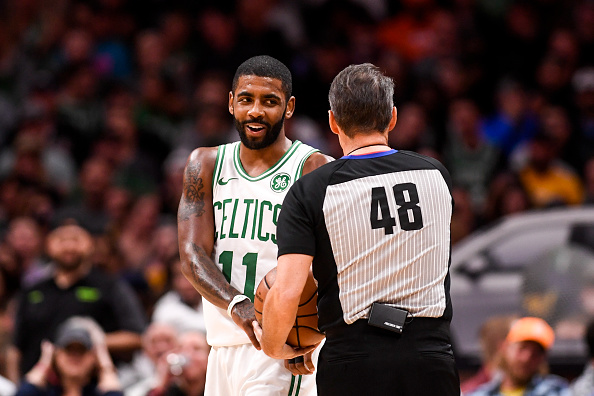 The Boston Celtics are coming off a pretty good 3-1 week. Their only loss came to the up and coming young Brooklyn Nets team; Kyrie Irving and Marcus Smart were out, but they still should’ve won. They played isolation ball and took too many contested threes; they started to play well too late in the game and came up short.

The Celtics lost to the Nets Monday night on the road 102-109. They almost came back and won that game, but their scoring run began too late and was not enough. Two starters were out, but that is still no excuse to lose the Nets even though they are playing well and currently sit at the sixth seed. Selfish play and horrific shot selection led to that loss for the C’s. D’Angelo Russell dropped 34 points along with seven assists, while Jayson Tatum had 34 points in vain. Then on Wednesday night, the Celtics defeated the Toronto Raptors in a huge game at the TD Garden. Kyrie dominated that game as he dropped 27 points and 18 assists, while Kawhi Leonard dropped 33 points for the Raptors, but still came up short against Boston. Irving was not only scoring, but he distributed the ball very well and helped the entire team get good looks all around. The Celtics played with effort and trusted each other with every possession. They looked like they were actually enjoying the fact that they were playing together on the court which led them to a victory over the top seed in the East. On Friday Boston went up against the Memphis Grizzlies at the TD Garden and won that game 122 – 116. The Celtics played pretty well on Friday, they outscored the Grizzlies 35 to 24 in the 1st quarter. The Celtics got outscored by Memphis 38 to 23 in the 2nd quarter which gave the road team the lead at halftime. During the second half Kyrie just took over and ended the game with 38 points and 11 assists, and Aron Baynes helped out with 12 rebounds in his second game back with from injury. On Saturday evening the Celtics visited the Atlanta Hawks and beat them 113 – 105. Irving had another huge game as he dropped 32 points along with five assists and, believe it or not, Terry Rozier had 11 rebounds for Boston. The Hawks led for much of the game, then the 4th quarter came around and Kyrie led the Celtics to outscore the Hawks 30 to 16. Marcus Smart was ejected from the game, yet the Celtics still took care of business and came out with the win.

How will this week look?

The Celtics will play the Miami Heat in Boston on Monday night as they look for revenge from the last time they played the Heat. The Celtics should come out better prepared for the Heat this time around. Kyrie has been on a tear lately and has moved the ball very well for Boston. He is averaging 23.4 Points and 6.8 assists per game this season and has the Celtics currently sitting at the fifth seed in the Eastern Conference. Miami will come to play and probably give the Celtics some problems in their frontcourt due to their size and rim-protecting presence from Hassan Whiteside and Bam Adebayo. Baynes being back for Boston will definitely help them against Miami, he didn’t play in the last matchup between the two teams and gives them defense and size up front. I think the Celtics come out with the win over Miami in a close game, especially since they’re playing at home with their amazing fans.

The Cavs visit Boston at the TD Garden on Wednesday night. The Cavaliers come into this one with the worst record in the league at 9-38. Kevin Love still hasn’t returned from his foot injury even after having surgery and they have just plummeted since LeBron James left to the Lakers in free agency. Everyone expected the Cavaliers to be one of the worst if not the worst team this season. The Celtics have been playing very well and are currently on a three-game winning streak after defeating the Hawks. Boston should easily win this one because they are one of the most talented teams in the league and have been playing really well as of late. They are slowly figuring out, so expect them to defeat the Cavs in a blowout on Wednesday night. The young guys off the bench should see some minutes against Cleveland in this game as it will probably get ugly very early on.

Look forward to a showdown on Saturday night as the first seed in the Western Conference the Golden State Warriors visit the Boston Celtics at the TD Garden. The Warriors just got Demarcus Cousins back on Friday night against the Los Angeles Clippers which doesn’t help the Celtics’ chances of beating them. Stephen Curry is having a historical season and is averaging 29.8 points per game thus far. He recently moved into the third spot all-time for three-pointers made passing Jason Terry, continuing to be an amazing leader and a top five player in the league. As soon as Curry returned from his injury the Warriors have been dominating against every single team they have played. The blew out the Denver Nuggets who were the top seed at the time by 31 points; they had to remind the rest of the NBA how good they are. The Celtics have also been playing very well; their team chemistry is improving and Kyrie seems to be emerging as their leader dropping 30 plus points in his last two games. On the bright side for the C’s Gordon Hayward seems to be getting in the “flow” again and has consistently been hitting jump shots from the mid-range area and three-point land. Jaylen Brown is slowly getting back into rhythm and has been playing good defense on a nightly basis which gives the Celtics versatility. Both teams match-up very well due to the fact that they both have a lot of versatile wing players that can switch on defense and shoot the basketball. Smart and Draymond Green give their respective teams great energy and hustle which doesn’t necessarily show up on the stat sheet, but will definitely be key factors in the outcome of this game. Boston playing at home will definitely help them out with the energy from their fans, but the Warriors are the toughest and most talented team in the league to beat. I believe the Celtics can win because they have been solid as of late, but ultimately I think that Golden State is just a little bit better and will win in a very close game.

The Celtics still currently sit at the fifth seed in the Eastern Conference with a record of 28-18. They are learning day-by-day how to play together and what it takes to win a championship. Kyrie needs to emerge as their leader which he is currently in the process of doing; he even called Lebron to apologize for being an impatient young player who thinks he knows what it takes, but actually doesn’t. That takes some guts to make it known to the media especially nowadays; it shows how much Kyrie has matured and how he will use what he learned and is somewhat still learning to help his current team out. The Celtics look like they are on the right track; Kyrie has been moving the ball a lot and is still scoring when he needs to in crunch time. He had double-digit assists in two of their last three games and one of those was against a top-five team in the league. I believe the Celtics can go undefeated this upcoming week, but their most challenging game will obviously be against the Warriors in a primetime game on ABC at home. I predict that the Celtics will go 2 -1 due to the fact that they will probably come up short against a very talented Golden State team, although don’t be surprised if they end up going 3 – 0.