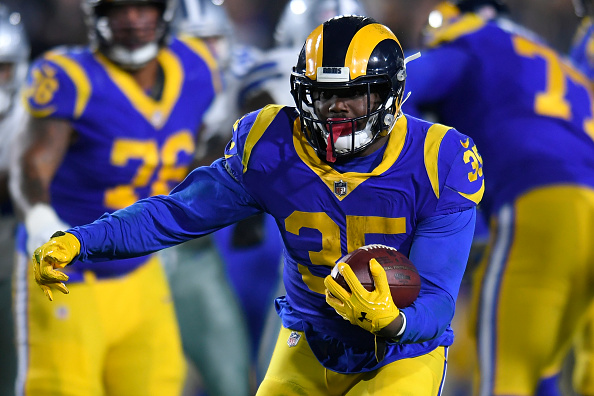 The Los Angeles Rams are one win away from making it to the Super Bowl for the first time since 2001. Due in large part to the two-headed running attack they recently acquired. The Rams backfield was formerly a one-man band in Todd Gurley who shouldered much of the rushing responsibilities. However, a lot of changed when they signed C.J. Anderson going into Week 16.

Prior to Anderson’s arrival, the Rams rushing offense was seventh in the NFL with 1,807 yards and averaging 4.8 yards per carry. There was a lingering fear that they were over-extending Gurley who was playing with a knee injury. He was second in the league in rushing attempts at the time with 256 and averaging 18 carries a game. Let alone 59 receptions in total.

Since Anderson’s arrival, Gurley has only had 16 carries to go along with 2 receptions. He was able to sit out the final two games of the regular season which was key to his knee fully healing. In those two games, Anderson had 43 carries for 299 yards, two touchdowns and averaged 6.9 yards per carry.

Anderson was exceptional in Gurley’s absence.  Especially when taking into account that he was just cut by the Oakland Raiders a week beforehand. His low usage prior to signing with the Rams left Anderson with fresh legs to spare. He spoke on this per the Rams Wire:

“I’m fresher than Mark (Ingram II) and Alvin (Kamara) and Todd, for sure. I think it helps a lot.”

The Rams were obviously aware of this in their playoff game against the Dallas Cowboys. Anderson got the bulk of the carries with 23 versus Gurley’s 16. The duo combined for 238 total rushing yards. Anderson receiving more opportunities could lead to an established star like Gurley feeling a bit jealous since he is losing carries. However, head coach Sean McVay says that is not the case per turfshowtimes.com:

” Todd knows he’s a special, unique football player. I think he’s very secure in himself so that he understands that  C.J. helps us. Really, for Todd, just getting back in the flow, being able to kind of just get his wind back and be able to have as productive of a game as he did with him having really had a month off, I think, is a large credit to Todd.”

The selflessness of Gurley makes this whole thing work. It is the reason why the Rams were able to impose their will on the Cowboys. The two-headed ground and pound game offers differing looks which are tough for a defense to defend.

The New Orleans Saints defense will have their hands full with both running backs. Although, the Saints defense was second in the NFL at stopping the run. It is the battle in the trenches that decides the success of the ground game.

The Rams resolve will be put to the test on the road in the biggest game of the season. A win can easily rest on the shoulders of their workhorses in the backfield. A challenge they are more than ready to accept.