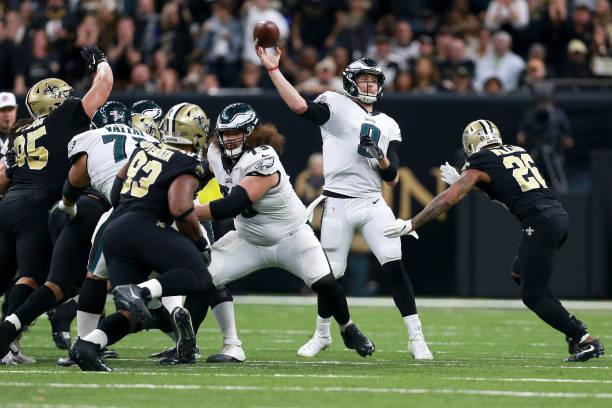 The story of Nick Foles was one of the most unlikely sports stories of all-time; it’s also the story of an underdog proving his worth and stepping in after an injury twice to prove his worth.

In 2012, Nick Foles was drafted by the Eagles with the 88th pick in the draft, and in his rookie season he put up an unimpressive 1-5-0 record in relief of Michael Vick. In 2013, however, Foles had a breakout year – in the ten games he started in, he threw for 27 TDs and 2 INTs and was selected to the Pro Bowl. The Eagles lost in the playoffs to the Saints, however, and going into the 2014 season he had large expectations, which he sort of met by going 6-2-0 in the games in which he started in and he became a free agent. After two uneventful stops in St Louis and Kansas City, he re-signed as an Eagle in the 2017 offseason.

The Season-Saving Effort in 2017

In 2017 Nick Foles signed as a backup and he sat on the bench for most of the year, backing up Pro Bowl QB Carson Wentz. But, in a Week 15 game against the Rams, the Eagles’ Super Bowl hopes had appeared to take an abrupt turn, when Wentz tore his ACL and was helped off the field. The backup QB was Nick Foles, who came in and finished off the game and won vs. the Rams. Heading into the 2017 postseason, the Eagles were considered a dark horse to win the Super Bowl, despite them being the first seed in the NFC, just because of their QB going down. They were two and a half point underdogs going into the NFC Divisional Playoff Game against the Falcons, and they won 15-10. This started the “underdog” narrative around the Eagles 2017 postseason run. They then faced the Vikings in the NFC Championship Game, who were fighting to play in the Super Bowl in their home stadium. The Eagles laid a good old fashioned beat down on the Purple and Gold, defeating them 38-7. They were underdogs in that game too. Then, Nick Foles’ legend grew to tremendous heights in Super Bowl LII vs. the Patriots, where his Eagles were four and a half point underdogs to the Patriots. The Eagles were leading with 0:40 left in the fourth quarter when Nick Foles and the Eagles birthed a legendary play.  On the play, Nick Foles moved up to behind his offensive line and the ball was directly snapped to Corey Clement. Clement lateraled the ball to Trey Burton, who passed the ball to a wide open Foles to score a touchdown at the end of the half. This went down as one of the gutsiest calls in NFL History and it vaulted the Eagles and Nick Foles to a Super Bowl Championship, where Foles was named SB MVP.

In 2018, Nick Foles was, again, Carson Wentz‘s backup, outside of the first two games of the season where Wentz was recovering from his ACL injury. Again, Wentz got injured and the Foles had to come in as the starter; this time, however, his job wouldn’t be so easy. The Eagles when he stepped in were 6-7 and needed to win out and get help to grab the sixth seed in the NFC and go to the playoffs. Foles did just that – he and the Eagles won three straight and got help and made the playoffs. The Eagles faced the Bears in Soldier Field and won 16-15 due to a Cody Parkey field goal miss. They went into New Orleans and faced the high-powered Saints offense and held them to 20 points, but the Eagles lost due to an Alshon Jeffrey drop. Foles thanked the Eagles faithful postgame and is now set to become one of the hottest commodities on the market this offseason.

Where Could Foles go if he was traded or where could he sign?

Philadelphia could pick up an option on Foles’s contract and then try to trade him, with hopes of securing a few higher-round draft picks, or it could slap the franchise tag on him and then not match another team’s offers, netting the Eagles two first round picks. Either way, it’s unlikely that Foles is back in Philadelphia because they’d almost have to slap the franchise tag on him to keep him, which would cost the Eagles around $21M, which is far too much to pay a backup. Foles could also pay the Eagles $2M to become a free agent. If Foles becomes a free agent, he could sign with anyone who needs a QB, and these teams come to mind who may need a QB:

Both of these teams could be attractive options for Foles; both have a nice defensive core and both have a potential need at QB. The Redskins would only inquire about Foles if Alex Smith‘s leg injury turns out to be career-ending, so the Jags seem to be a better option, especially with the Jags reportedly moving on from Blake Bortles.

Both of these teams could see themselves moving from their current starters, and they could be in the market for a QB like Nick Foles. These are two of the more unlikely destinations for Foles, but with Eli Manning aging and Ryan Tannehill not doing the greatest, he could be a viable option.

This is the “dark horse”, so to speak, for Foles, but there could be a place for him in Mile High. New HC Vic Fangio did say, however, that right now Case Keenum is the starting QB, but what makes this slightly likely is that the Broncos didn’t hire Gary Kubiak as their Offensive Coordinator, and Kubiak is a big Keenum supporter. There may be a place for him on the Broncos, but it would take a titanic event to dethrone Keenum as the starter.

One way or another, Foles will more than likely be on a different team, we’ll just have to see who it is. The most likely destination is Jacksonville, but he has to compete with QBs like Joe Flacco and Teddy Bridgewater. Free agency should be fun this year.