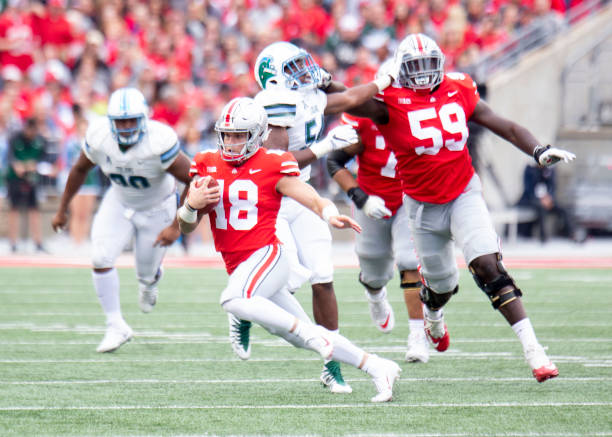 Per Tate Martell‘s twitter page (@TheTateMartell), Martell will be joining his Bishop Gorman (Las Vegas) teammates, Bubba Bolden, and Brevin Jordan at The University of Miami.

On January 5th, quarterback Justin Fields, the number one overall recruit in the 2018 class will be transferring from Georgia to join the Buckeyes. It’s still up in the air if Fields will be granted eligibility to play in the 2019 season due to NCAA transfer rules.

With the departure of Heisman trophy candidate Dwayne Haskins, it was presumed that Martell would finally get his shot to lead the Buckeyes. Martell was very vocal about the arrival of Fields.

“Why would I leave for someone who hasn’t put a single second into this program? I have put two years of literally working my ass into something that I’ve been waiting for and a dream I’ve had my whole life. To just run away from somebody who hasn’t put in a single second in at winter workouts and doesn’t know what the program is all about? There’s not a chance.” – Tate Martell

With all this being said, Eleven Warriors an Ohio State centered news site reported on January 10th that Martell’s name was in the transfer portal. The reports were that Martell narrowed his decision to Miami, West Virginia, and Louisville.

Martell is a former four-star recruit from the 2017 class and the number two dual-threat quarterback. Martell, red-shirted his first year then served as the back-up for the Buckeyes this past season. Martell was originally committed to play at Washington before he decided to commit to Texas A&M. He then de-committed to play at Ohio State. With this news, this will be the 4th power-five school Martell has committed to play at.

Martell will have to sit out the 2019 season due to NCAA transfer rules but will be eligible to play in his red-shirt junior year in 2020.

As an Ohio State fan and student, this news is kind of disappointing. Martell fits the system perfect, a running quarterback who is also your main play-maker. Time will tell if Ryan Day tends to lean more towards a pocket-passing system. Martell is perfect for Miami in my opinion. he has a colorful personality and will thrive in a big, fun city like Miami. If I am guessing here, Martell got word that Fields will be granted eligibility and decided to go find somewhere to showcase his talents.

Fields filed a claim to the NCAA that he is leaving Georgia due to a racist incident that happened during a game where a Georgia baseball player referred to Fields as a racial slur.  If Fields isn’t granted eligibility, Ohio State is now thin at quarterback depth for the 2019 season.