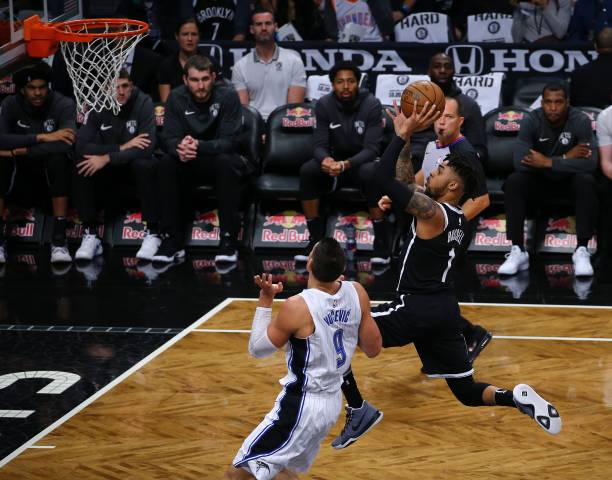 In his rookie season, Russell averaged 13.2 ppg, 3.4 rpg, 3.3 apg, 1.2 spg, shot .410% from the field, .737% from the free-throw line, .351% from the three-point line, and had an eFG% of .478%. His rookie campaign was solid. As a number two pick, it was good, compared to the recent number two picks in previous drafts, especially with him sharing a backcourt with one of the greatest players of all time, Kobe Bryant.  As a Laker fan, I was excited to have Russell on the team and I was looking forward to seeing him evolve in LA.

In 2016, Russell upped his game up a bit, averaging 15.6 ppg, 3.5 rpg, 4.8 apg, 1.4 spg, on .405% shooting from the field, .782% from the free-throw line, .352% from the three-point line, and had an eFG% of .483%. As you can see, Russell improved in every category, except for FG%. Russell evolved in his sophomore season, as I expected him to as the second overall pick in the 2015 draft. I thought the Lakers had found their young “big 3” in Julius Randle, D’Angelo Russell, and Brandon Ingram. But, the Lakers had different plans in mind, trading D’Angelo Russell and Timofey Mozgov for Brook Lopez and a late first-round draft pick.

In 2017, D’Angelo Russell was on the Brooklyn Nets. I knew that he would be fine in Brooklyn and also felt that the Lakers made a mistake by trading him. Russell went on to average 15.5 ppg, 3.9 rpg, 5.2 apg, 0.8 spg, shooting 41.4% from the field, 74.0% from the free-throw line, 32.4% from the three-point line, and his eFG% was 48.1%, that season. It was an injury-rattled season for Russell in his first season in Brooklyn. But, the Nets may have found their franchise player in Russell.

In my opinion, the Lakers made a mistake by trading away D’Angelo Russell, because he has developed his game and has become a go-to player. The Lakers traded Russell away to give up Mozgov’s 4-year/$64M contract. But, they also traded him in order to draft Lonzo Ball. There may have been something within the organization. The Lakers could have kept Russell – they could have drafted Lonzo and had Lonzo and Russell as the backcourt in LA. Lonzo is a pass-first guard, Russell is a score-first guard. So Lonzo could have been the point guard and Russell the shooting guard. But that’s the past, now, the Nets have found the player to build around in Russell, and they made the better trade with LA.

So, as you can see, Russell has worked hard, emerged as the number one option on his respective team. He has improved bit by bit every season, this season has been his best so far while leading the Nets. Now they have a chance at making the playoffs this season, in a breakout season by Russell. It will be very fun to watch Russell in the playoffs.