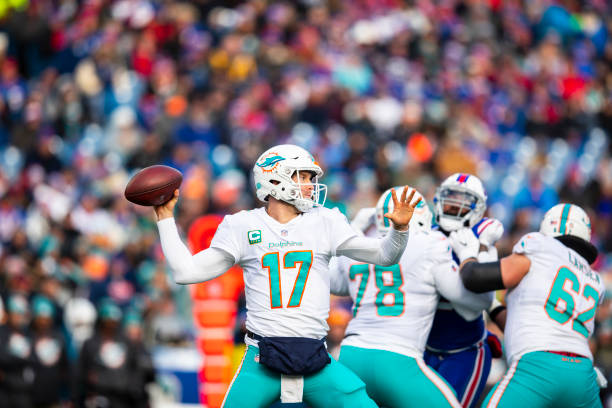 Miami’s season started off great out of the gate, and we’re looking good at 3-0. Led by a finally healthy Ryan Tannehill, who hadn’t played since 2016. The bubble was swiftly burst as back-to-back losses followed, which included a blowout loss to the New England Patriots in week 4, and then just a week later Tannehill picked up a shoulder injury late in week 5 against the Cincinnati Bengals. Brock Osweiler would fill in for five games, going 2-3.

Looking Back On The Season

They would at least end up having their revenge against New England in week 14. After the Patriots failed to score a touchdown on a final fourth-quarter drive, deciding for a field goal, the Dolphins got the ball back trailing 33-28 with seven seconds to play.  In what was dubbed the Miami Miracle, a 69-yard hook and lateral to Kenyan Drake would result in the last second 34-33 win. Without a doubt the highlight of the season.

It was in week 15, against the Vikings, that rookie running back Kalen Ballage burst onto the scene, rushing for 123 yards on 12 carries and a touchdown, highlighted by a 75-yard touchdown run.  There is certainly some potential their looking into next year, pairing him with Kenyan Drake. One thing the team can build on is that they did average over 100 rushing yards per game.

The defense was a big problem for this Dolphins club, and will certainly be retooled in the offseason. Miami needs to add at least two (and possibly more) edge rushers to this group. They ranked in the bottom five of the NFL in sacks and second worst in rushing yards allowed. Cameron Wake is going to be 37, as well as a free agent, and Robert Quinn is looking like a potential cut candidate, having not done a heck of a whole lot when you consider the amount of money he will be receiving.

Ending the season with a 42-17 loss to the Buffalo Bills, they finished 7-9, good for second in the division. For the Dolphins, they just weren’t that sharp on either offense or defense. They were 26th in points scored and 27th in points allowed.  Even with those sorts of numbers, they were still in the playoff hunt until Week 16 – it was their problems on the road that killed any real chance of making the playoffs, going 1-7, which was tied for second worst in the NFL.

As we look towards this coming offseason, the Dolphins have needs everywhere you look, but none greater than the QB position. It seems likely the Dolphins are ready to move on from quarterback Ryan Tannehill, whether it’s through trade or release. The Dolphins will be looking for a quarterback to take over the reins for the 2019 season. After going the first four years of his career without missing a game, Tannehill suffered a partially torn ACL in late 2016. Just six months later the quarterback again partially tore that same ACL in training camp. This year, Tannehill has only been on the field for 10 of 15 games.

There are certainly options out there who can quickly step in and fill the quarterback position for just one more season as they look towards the 2020 draft, where they plan on targeting one of those highly touted quarterbacks. A few names that come to mind include Teddy Bridgewater, Tyrod Taylor, Joe Flacco, Ryan Fitzpatrick and possibly Nick Foles.

Bridgewater started the final game of the regular season, a throwaway loss against the Carolina Panthers. He is still young and has enough potential that he could be a solid name to look at as an option to hold down the fort for a season. A horrible 2019 season could put Miami in position to draft either Tua Tagovailoa of Alabama or Justin Herbert of Oregon. Herbert decided to return to school, while Tagovailoa won’t be eligible to declare until the 2020 draft.

The iron man Frank Gore apparently wants to return for another season, but he will be an unrestricted free agent this summer, and we should expect the Dolphins to cut the cord at this point, giving both Kenyan Drake and Kalen Ballage an opportunity to show us what they are capable of without any distractions. Gore led the Dolphins with 722 rushing yards and an average of 4.6 yards per carry, also adding 12 receptions for 124 yards and a touchdown.

Miami swiftly fired Adam Gase after a second consecutive season under .500. He was quick to find another head coaching opportunity, signing on with division rival New York Jets. Brian Flores, who is expected to be named Dolphins coach after the Patriots season ends, has never been a head coach at any level. Former Colts and Lions coach Jim Caldwell is rumored to be joining Flores’ new coaching staff on a senior advisory role.