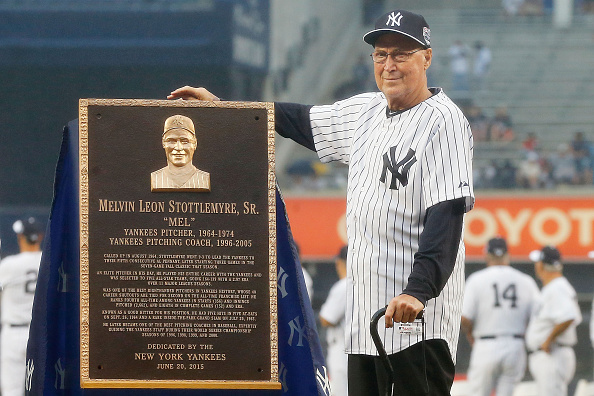 A legend died today. Melvin Leon Stottlemyre was a baseball icon for New York baseball. He lived most of his life for the pitchers that threw in the Bronx and Queens. Today we say goodbye to Mel after his long fight with cancer.

Mel Stottlemyre made his major league debut in 1964 for the New York Yankees. He pitched for 11 seasons with the Bronx Bombers going 164-139 with a 2,97 ERA. He threw over 250 innings 9 years in a row and led the league twice in CGs.

Mel coached some of the greatest pitchers in the majors for the past 35+ years. He was the pitching coach for the New York Mets from 1984-1993. That staff included Dwight Gooden, Bobby Ojeda, Ron Darling, Sid Fernandez, and David Cone. They won the World Series in 1986.

He then went on to Houston briefly before settling in on Joe Torre‘s staff and coaching the likes of Andy Pettitte, Roger Clemens, and Mariano Rivera. Let’s not understate his impact on that team. In 1996 the Yankees team ERA was 4.65. The following year it was 3.87. It then moved down to 3.82 in 1998. The Yanks won four World Series in his time with them and the staff was a large part of their success.

Stottlemyre was diagnosed with Myeloma in 2000. Although it was in remission for some time, the cancer reappeared in 2011. He resided in Washington and is survived by his wife Jean and his two sons Todd and Mel Jr.

Our thoughts and prayers go out to the Stottlemyre family.