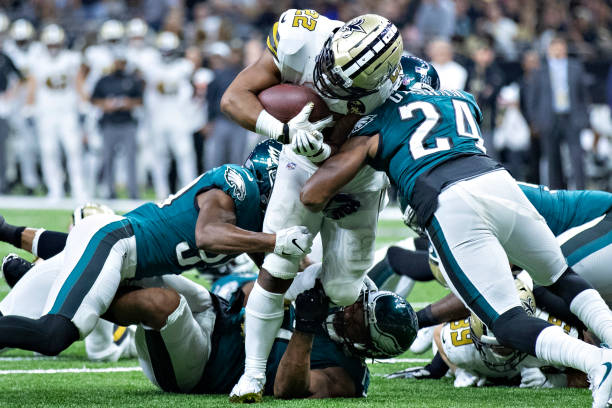 When these two teams last faced off in New Orleans in week 11, the Philadelphia Eagles played their worst game in recent memory, getting run out of the Superdome, 48-7. We should expect the Eagles to be able to do a much better job at scoring with the New Orleans Saints this time. The Saints had a much different road to the playoffs, finishing up the regular season 13-3 and grabbing the number one seed. Philadelphia, on the other hand, had to dig themselves out of a 4-6 hole, winning five of the last six and beating the Bears in the wild-card round.

Saints Run Defense vs Eagles Running Attack – Finishing the regular season ranked 2nd against the run, the Saints gave up only 80 yards per game. It was only last year that they were ranked 15th in yards per game with 110; what a difference a year makes.

Cam Jordan and Alex Okafor are each quality run defenders on the edge. The New Orleans secondary is also solid in defending the run – safety Vonn Bell is second on the team in tackles with 89 combined. Philadelphia didn’t have much success running the ball against New Orleans in the first meeting, being held to 58 rushing yards on 12 carries with a lone rushing touchdown.

Philadelphia has to find a way to get something out of its ground game and not just expect Nick Foles to carry the can. Otherwise, we could end up seeing a repeat of week 11. Their running attack is a committee, led by rookie Josh Adams, who tops the Eagles in rushing yards with 511. Adams was, however, nonexistent in the wildcard, having supplied just two yards on one carry. We should expect the Eagles to get a lot more use out of him in this game.

Wendell Smallwood and former Saint Darren Sproles are mainly used in passing situations or as a change of pace. Both Smallwood and Sproles headed the running attack in the playoff victory over the Bears. The production truthfully was nothing to get excited about, however, as they combined for just 41 yards on 21 carries.

Eagles Defense vs Saints Receivers – The Eagles main soft spot remains in the secondary. In total, six opposing receivers this season have burned them for at least 100 yards each. Now, to be fair here, they were missing a number of key players in that pass defense over the course of the season. Having to win their last handful of games with a lot of patchwork players, they were grasping for any help they could get.

Relative unknowns like Cre’von LeBlanc, Tre Sullivan and Rasul Douglas have stepped up in a big way. LeBlanc has become a key player, filling in for Sidney Jones at nickel cornerback. That defensive front of Fletcher Cox along with talented edge rushers like Michael Bennett and Chris Long will need to do whatever it takes to get to the Saints QB as much as possible. The Eagles front were good for 49 sacks this season, ranking them 5th.

Drew Brees has two of the NFL’s most productive receivers in wideout Michael Thomas and dual-threat Alvin Kamara. The two combined for nearly 55% of the Saints passing game. Thomas set the franchise single-season record for receptions and yards. Kamara was second on the team in receptions. Both players should expect to be targeted early and often.

Looking at the rest of that Saints receiving corps, the return of Ted Ginn Jr. in week 16 should help provide Brees with another suitable target, as they weren’t getting enough out of the No. 2 receiver spot with Ginn out of commision.

Ginn’s ability to stretch the field and help take some of the added attention off Michael Thomas will be very useful, this will also give Tre’quan Smith some much-needed looks. Smith has shown flashes of skill mixed in with a lot of inconsistency.