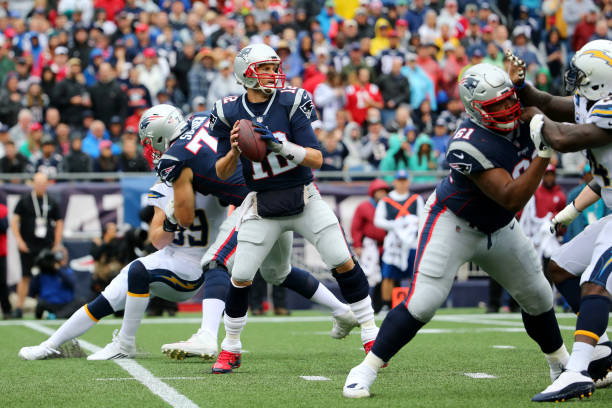 The Los Angeles Chargers will visit Foxborough for a meeting against the New England Patriots. Philip Rivers and Tom Brady will meet once again, this possibly being the last time they meet in their career. Tom Brady has had Philip Rivers’ number so far, with a 7-0 record. But, this game could have a different outcome.

Philip Rivers has led this Chargers team to a 12-4 regular season record, 7-1 on the road, with the one road loss coming in LA against the Rams, so outside of LA, the Chargers have not lost a game. They won last week in Baltimore, 23-17, advancing to the divisional round against the Patriots.

These two teams met in 2007 in the AFC Championship game, where the Patriots defeated the Chargers 21-12. However, this season will be a bit different. Chargers are 13-4 in the regular season and postseason combined, the Patriots are 11-5. Tom Brady is locked in when his team has a bye week in the wild card. So this is not going to be an easy game for LA, but the Chargers don’t shy away from competition, no matter who they are going up against. As DE Melvin Ingram says, “ASAP” – any squad, any place.

The Patriots are 8-0 at home. Unfortunately for New England, the Chargers are 8-0 outside of LA. It is going to be a great game on Sunday. Tom Brady has not been the Tom Brady we have been accustomed to seeing this season, but it’s the playoffs; Tom Brady off a bye week, that’s when he’s at his best. It is not going to be easy for Brady with Joey Bosa and Ingram rushing to sack him, but fortunately for Brady, he has James White, who can breakout for big plays, alongside him. The Chargers cannot let that happen if they want to stay in the game. Saying that, I do think Rivers and the Chargers offense will have their way against the Patriots defense. Rivers didn’t play great in the wild card game, but he did enough for the Chargers to win. The Patriots defense is nowhere near the Ravens defense. I think in this game Rivers will get 2-3 more seconds to throw the ball, which will be enough time for Rivers to find a receiver.

Taking a look at the injury report, it looks like Mike Pouncey, Melvin Gordon, Derek Watt, and Hunter Henry will all be available for the Chargers on Sunday. As for the Patriots, everyone is expected to play, including Deatrich Wise Jr. The Chargers made a roster move, signing K Nick Rose to handle kickoff duties, mainly to contain any big plays from Cordarrelle Patterson. 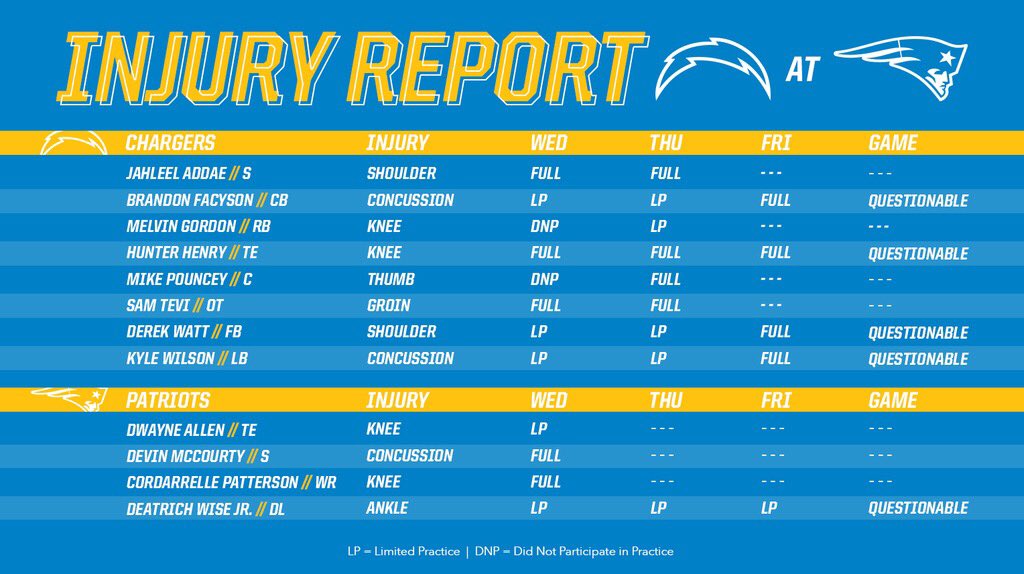 The Patriots are going to have to rely on Tom Brady to have a big game in order to keep up with Philip Rivers and the Chargers high-octane offense. Brady will look to improve to 8-0 in his career against Philip Rivers. Philip Rivers will look to get his first win against Brady, making it one win away from his first Super Bowl appearance.

Chargers are getting two players back for the Divisional Round. Two players who can make a big impact. TE Hunter Henry and DT Brandon Mebane. Brandon Mebane’s daughter was born prematurely on November 12th, with a rare heart defect, and she passed away last Thursday. Mebane, who is expected to play, will be playing with a heavy heart, and I am sure the team will be focused and will do everything they can to win for Mebane.

Words are hard to come by with the passing of Brandon Mebane’s infant daughter, Makenna.

Please join us in keeping Brandon, and his family, in your thoughts and prayers.

Philip Rivers is getting Hunter Henry back, after Henry has been out for the whole season, suffering a torn ACL during the offseason. It’s not a given that Henry will play, but chances are that he will. If he does play, he will be on a limited snap count. Even if he is used for 3rd downs and/or red zone scenarios, that should be enough for Rivers to do damage.

I’m expecting this game to be the best game of the Divisional Round; it’s always difficult to win in Foxborough during the playoffs, especially with Tom Brady coming off a bye week, but if any of the quarterbacks remaining in the AFC can do it, it’s Philip Rivers. I know he’s 0-7 against Brady, but something has got to give. It will be a close game; I have the Chargers winning this game 31-28. I think Chargers win because the defense will do enough to get to Tom Brady, and Brandon Mebane playing with a heavy heart will have the team focused, locked in for the full game. I don’t think Casey Hayward and Jahleel Addae will take any plays off, and with the return of Hunter Henry, Philip Rivers will have another go-to alongside Keenan Allen, Melvin Gordon, Mike Williams, and Antonio Gates. All of those receivers and Melvin Gordon are a threat to score in the red zone. It is going to be a good game, another reason I think the Chargers will come out on top is that it may be Antonio Gates’ last game and they want to win for him, along with for Mebane. And not just this game, but go all the way, and win the Super Bowl. What a career it would be for Gates if he retires a champion.