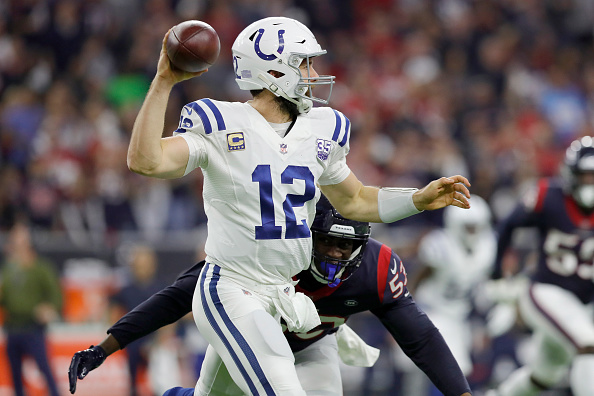 The NFL season is winding down and that means one thing. It’s playoff season and the AFC runs through Arrowhead, an idea that might make Chiefs fans nervous but what might make them more nervous is seeing Andrew Luck on the other sideline. I was in Indianapolis the day Andrew Luck led a massive 28-point comeback against the Chiefs whose offense and defense as a whole broke down and allowed the Colts to take advantage and lead Indy to one of the many Chiefs heartbreaks.

This is a new season, new quarterback, and a whole new game. The Chiefs have a chance to break the Arrowhead curse in this game against the team that has caused them the most pain. Looking directly at you Lin Elliott, Peyton Manning, and Andrew Luck. I digress, this game will be arguably the two best quarterbacks in the league squaring off against each other and will be a shootout in every sense of the word but still don’t expect a 54-51 game like the Chiefs had against the Los Angeles Rams earlier this season. This game will be featuring two dominant offenses and should be a very fun game.

Let’s first look at the quarterback matchup where all the hype is. Andrew Luck vs Patrick Mahomes who threw for a combined 89 touchdowns and 9,690 yards. Those stats are no understatement either, these two quarterbacks were in the MVP race ending the season and should be treated as such from both defensive coordinators. Patrick Mahomes is the favorite to win the award and has been an absolute treat to watch as he is a human highlight reel. Andrew Luck is more steady and seems to be way more comfortable in the pocket than scrambling. Chiefs can use this to their advantage as they have one of the best pass rushing defenses in the NFL, also the only advantage on defense they have. Look for Luck and his offense to adjust to this pretty quickly and go to Marlon Mack, their rookie running back who looks to be the future of the Colts run game. The game won’t be swayed by these players alone of course.

When you think of Chiefs, you think of the weapons on the Chiefs’ offense. Tyreek Hill, Travis Kelce but the player that is causing the most stir in the Chiefs’ locker room is Sammy Watkins who has been nursing an injury to his ankle since the Chiefs played the Rams. Watkins makes a huge difference to this offense as the offense has somewhat suffered, if you can call it that, since he has been gone. Watkins is not the only star wideout who is nursing an injury as T.Y. Hilton has been nursing an injury himself, and as Luck’s number one target, Colts fans are hoping he’s in top shape going against the Chiefs as he started off against the Texans in the wild-card game with three receptions in the first drive. His stat line tailed off afterward and that could worry some Colts fans as he is definitely the Colts top target but all is not lost if they can’t play Hilton as they have running back Marlon Mack who has been vastly underrated all season most likely due to the hype around rookie Saquon Barkley who is the likely Offensive Rookie of the Year. Mack averaged a very impressive 4.7 yards per carry and 908 yards off 195 attempts getting the bulk of carries for the Colts. The Colts also possess a top tight end in Eric Ebron who has built a great resume for this team and is a top target as well for the Colts gaining 750 yards off only 66 receptions with 13 touchdowns. The Colts are more stick to the roots and get the job done the way it’s been done for years. The Chiefs have more flash as you can tell from the speedy Tyreek Hill who can burn any cornerback in the league without trying too hard. Shutting down Hill will be a major priority for this Colts defense but the thing that should worry the Colts the most is Travis Kelce who has had a career year while setting the season record for most yards in a season by a tight end… for about 30 minutes before George Kittle broke that record. Regardless Kelce has had a monster season and will be a handful for the team who has the worst pass defense against tight ends.

Can Either Defense Stop Anyone?

Once you dive into defense it gets really difficult to think the Chiefs can pull off this game as they have one of, if not the worst defense in the NFL. Bob Sutton has been predictable all season and the secondary has been burned over and over again this season but this game might be different. Let’s avoid the Eric Berry question for now because it seems unlikely he will play, but a couple weeks ago Andy Reid allowed Charvarius Ward to start and although a lot of Chiefs fans seemed to let Ward have it after a mostly miserable start for his first game. He seems to have got it together since then and seems to be a player who could actually make a difference in this game as he’s still a young corner looking to get more reps. Meanwhile on the defensive line. There might not be a better line in the NFL sporting the most improved player I’ve seen this year on the Chiefs in Dee Ford, Chris Jones who set the NFL record for most consecutive games with a sack at an outstanding 11. Justin Houston, who may not be the player he was when he notched 22 sacks in one season but is still a player that can make a huge difference. (Cue his strip sack on Lamar Jackson on the final drive against the Ravens) Derrick Nnadi has been a pleasant surprise who I’ve been high on all season as he can eat up blockers. Let’s talk about Quenton Nelson, shall we? Wow, what a season. After being picked number six overall in last years draft he is making waves on the offensive line and there might be no one better suited to guard Chris Jones in the league as he is making highlights… as a left guard. The Colts are most likely the best offensive line in the league so this matchup of pass rushers vs offensive line beasts could make for the Chiefs to rely on the secondary more which is usually not a good thing but at the same time, that defensive line should get to Luck quicker and make him get the ball out quickly. This is strength vs strength and a very intriguing matchup going into this game.

After this, my key matchups for this game will be Patrick Mahomes vs Andrew Luck, Quenton Nelson vs Chris Jones, and Travis Kelce vs the Colts secondary. I could expect big games for each game as each team has the exact components to neutralize the other team’s strengths. The crazy thing about this game is that for each teams weakness it seems like the other team has the exact components to exploit their opponents’ weaknesses. This could easily be the matchup of the playoffs and will be very, very entertaining. At the end of the day I have to make my unbiased pick, and I see this game going into a shootout and the question will be can the Chiefs defense make the stops at the end of the game that matter and can the Colts hold Tyreek Hill and Travis Kelce in their final drive. The answer to both of those questions is no, so then the question becomes who will get the ball last? With Andy Reid’s clock management issues, I could see the Chiefs losing another heartbreaker and no matter how bad that might hurt me as a Chiefs fan. As an unbiased analysis, I have to give this game to the Colts and have them pulling away on the final drive to a high scoring game. If I have to give a final prediction I could see 2 or 3 field goals from each team to match 4 or 5 touchdowns, so I’ll say 41-37 Colts get this game in a nail biter.