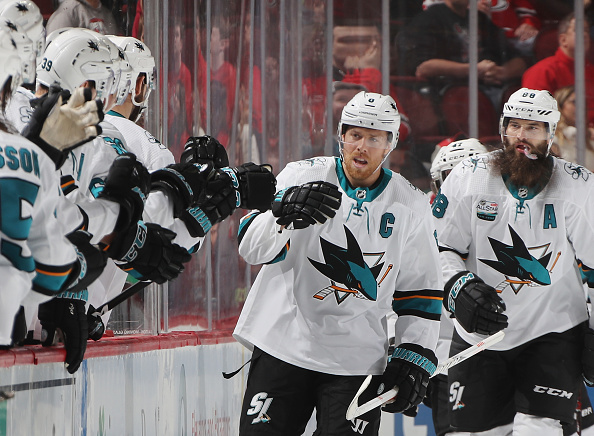 A couple of the usual suspects headline our slate along with a couple skaters on the same team. Take a look at the values and stacks as well to cash in on a busy night in the NHL.

Pavelski has been cold over his last three games but the Sharks take on the Ottawa Senators tonight, who are absolutely atrocious defensively. He has 25 goals and could add to that total tonight.

Rarely do I put two guys from the same team in the core four skaters list, but before Thursday, Karlsson had a 14-game point streak. He has been red hot and meshing very well in San Jose. Over those 14 games, he had one goal and 24 assists. I’d like to see him score more, but he is a must-play.

Alex Ovechkin (WAS) vs. CBJ

Sergei Bobrovsky is expected to start tonight and he has struggled on the road all year. Ovechkin has been a little cold for his standards, with four points in his last five games, but last game he had two goals. Let’s see if he can ride this momentum into a W against Bob and the Jackets.

Jonathan Quick is expected to start tonight for the Kings, and it’s been a very up and down year this season for him. Crosby has six points over his last five games and should get some elite scoring opportunities tonight.

Obviously, this is my number one stack of the night. I love picking on Ottawa, it’s too easy. I don’t need to say much here I don’t think, just trust me.

It may seem odd for me to attack the Lightning, the best team in the league, but Louis Domingue is in net. His GAA is about 3.00, which isn’t good, but since his team scores like crazy, he has a 15-4 record. I wouldn’t bet on the Lightning losing, but I would bet on this line tonight. The Sabres moved Thompson up to line one and Reinhart down to get more secondary scoring, so this also provides decent value. Let’s go Buffalo!

I already said how Bobrovsky struggles immensely on the road, so you know why I’m picking against Columbus. Kuz has been hot and cold lately, but tonight I expect him to come alive tonight. Tom Wilson is an amazing value play, especially since he is a consistent scorer. He’s got three points in his last three games and is averaging nearly 15 FanDuel points per game. Carlson is also hot and cold lately but you don’t want to miss out on a possible multi-assist night tonight.

Michael Hutchinson has been struggling in goal for the Leafs with a GAA of over 3.00, so you have to attack him, especially with this powerful line. Patrice Bergeron has been great since returning from injury, recording 12 points. Pasta has been cold over his last three but is due tonight against a bad netminder. Brad Marchand has been playing really well lately. This stack will cost you though.

My “Risk It” Low-Owned Stack of the Night:

When it comes to scoring, Arizona isn’t very good. Also, I’ve noticed that when they have a four or five-goal game, there are so many different people whose names are on the scoresheet. They have zero consistent scorers. This stack is incredibly cheap, and Arizona is going up against Cam Talbot, whose GAA is atrocious at over 3.20. They should have a good night, but hopefully, the Yotes powerplay can get going and come up big tonight.

(Players not mentioned above who should also be considered):