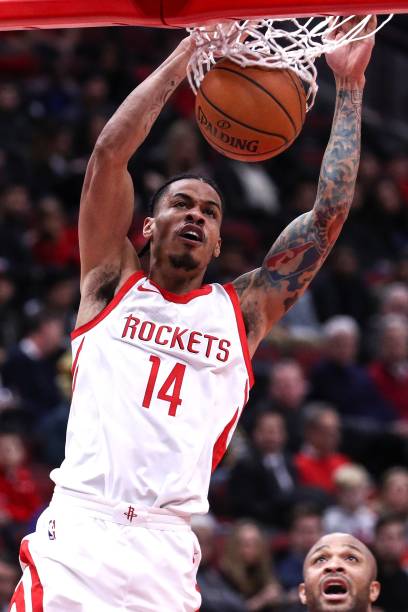 The point guard version of this article is a good introduction to this concept of the evolution of each position and how important it really is.

Today let’s take a look at the evolution of the shooting guard position.

In the 1950s, the shooting guard position was much more literally accurate to its name than it is today. Basically, the job of a shooting guard was to be a very good shooter and not much else.

He was generally the only competent distance shooter on the floor. This included more well-known names like Bill Sharman and Carl Braun, but thanks to the only requirement for the position being the ability to shoot, there was no standard build for a shooting guard.

They weren’t generally counted on for much other than getting the ball kicked out to them from the post, and averaged just 8, 3, and 2 on 36% shooting.

As we headed into the sixties, they became much more important. Despite a lack of elite-tier two-guards, there was a very consistent increase in offensive production.

The growth in points was massive, up to an average of 11.8, and rebounds, assists, and field goal percentage also rose, while shooting guards generally took on more of a ball-handling role and became much more of a true second guard next to the point.

But in the ’70s, that era of transition from big man-heavy to guard-heavy play thanks to the ABA, we didn’t see any marked improvement from the position overall.

Field goal percentage went up about 3%, which was pretty on-par with the rest of the league, scoring and assists largely remained the same, and rebounds went down quite a bit, certainly at least partially due to that increase in field goal percentage (and therefore, decrease in missed shots to possibly rebound).

12 points and three for both rebounds and assists, plus just under a steal and 0.2 blocks would be what we’d see from the average shooting guard in this era.

The decade after that saw the half-court game expanded and focused on, and of course, that turned the position’s biggest weapon into an isolation-heavy offensive set. Rebounds continued to decline, but that ‘iso’ game led to more defensive stats; both steals and blocks went up.

Three-pointers are now a thing, and the average shooting guard shoots them at a twinge over a 30% clip, certainly better than any other position at the time, but nowhere near what would be considered average today.

In the nineties, the three-pointer was really starting to become a weapon though, with guys like Reggie Miller and John Starks succeeding with that as the most notable part of their games. Attempts tripled and the percentage increased by almost 5%.

Scoring overall went down, which naturally drug down assists as well, but the more physical twos led to a slight increase in rebounds.

Turnovers went down quite a bit, which is good, and while the role of a shooting guard didn’t change much other than the normalization and necessity of the three-pointer, in general, they were a bit more efficient on both sides of the floor than before.

With the 2000s came the hand-check rule. And while it absolutely did hinder the position defensively, they weren’t nearly as affected as the point guards were. Steals per game dropped just from 0.95 to 0.87.

Then finally we reach this current decade; not the best decade for shooting guards. After all, we don’t have a Michael Jordan or a prime Kobe Bryant anymore leading the position.

Yes, of course, there’s James Harden, but something just doesn’t feel quite the same with him. That’s not to say it won’t in a couple years, but he hasn’t fully proven himself when it matters yet and he hasn’t impacted the culture or the discourse of the game in the way that they did.

Anyways, frankly, it’s looking like the position is in dire need of a change. Points are down, rebounds are down, assists are down, steals are down.

On top of that, field goal percentage is down and minutes are down. Blocks have stayed the same, but that’s generally insignificant for the position, and while three-point attempts are rising, three-point percentages aren’t.

So now let’s go through identifying throughout history what being an average shooting guard means.

Now, starting off back in the fifties, this is a guy named Ken Murray. He played for a few teams, including the Baltimore Bullets and the Fort Wayne Pistons, both for multiple stints, and the Philadelphia Warriors.

He had a decent rookie year actually. He averaged 13, 5, and 3, but he stepped away from the game to join the military for a couple years, and his basketball career wouldn’t be nearly the same once he came back.

He was pretty good at drawing fouls but other than that his game wasn’t really notable in any discernible way. Which I guess is good, since we’re looking for the most average players for the position.

For the sixties, it’s Rod Thorn, of all people. He’s mostly known as the guy who drafted Michael Jordan.

He always will mostly be known for that, but he was a good player back in his day. He was a star for West Virginia in college alongside Jerry West. He played in the NBA for eight years, he was a pretty decent scorer who used his finesse to his advantage.

I’m sure that, in retrospect, the Bullets would rather have selected Gus Johnson or Nate Thurmond, but Rod Thorn was a pretty decent player.

Nothing special, but decent.

In the seventies, remember, there was a bit of a stall in innovation within the shooting guard position, and the average player ends up being Jim Barnett.

Barnett most memorably spent a few years with the Warriors and one with the Trail Blazers. His Blazers season was his best, averaging about 18 points a game. That was when the Blazers were in their second year of existence though, so he obviously had more opportunities there than he would on a more competent team.

Barnett, now a longtime announcer for the Warriors, in his playing career, was a good shooter, though he didn’t particularly stand out at anything else.

He shot over 80% most of his career from the foul stripe. He grabbed a few rebounds, he got a few assists, and he was pretty reliable in terms of ball movement.

Not a particularly good defender, but his job was to hit some shots and he made a career out of it.

In the eighties, we had Billy Ray Bates.

He’s mostly known at this point for robbing a Texaco, cutting off a guy’s ear in the process, and only getting $7 for his trouble, after which he spent five years in prison.

Last I’ve heard from him is when he got fired from coaching a Filipino basketball team for “repeated conduct detrimental to the team and the league” after a drunk and coked up Bates threw rocks at some dude’s limousine.

As a player, he was an incredible scorer back in college and an incredible player after his time in the league; when he played in the Philippines, he averaged over 45 points per game.

But during his time in the NBA, he was a selfish player and a team cancer. He could certainly score, even at that level, and during his rookie year, he even shot over 40% from behind the arc for the season.

He was extremely talented, but he played no defense, showed no effort, and refused to involve his teammates, and that’s how he ended up out of the league and in the Philippines by just 26 years old.

He’s extremely representative of the embrace of isolation play, as that was the only thing he ever seemed to do, and it killed his career.

When the nineties tripled three-point attempts, that put Anthony Peeler as the average player. I liked Peeler, he was a fun guy to watch in his prime.

He had a sweet stroke as a leftie and developed into a dangerous shooting threat throughout his career. By the end of his career, he was a consistent 40% shooter from deep and was at least near that benchmark for about 3/4 of his time in the NBA.

Other than being a great shooting option, he was also quite an athlete during his Laker and Timberwolf days. Not a great rebounder per se, but he had a few good years passing the ball and he was a capable defender too.

You could make an argument that Anthony Peeler is the epitome of the emergence of the athletic 3-and-D player, actually, and of course, that’s the type of player that teams are still looking for the most at this position today.

In fact, both of these upcoming players, featured from the most recent two decades, will be very similar in that way, but just even more extreme in all of the major aspects of this prototype.

The average shooting guard from the decade of 2000-2009 is J.R. Smith. Now, that’s young J.R. Smith, remember, because these selections are made from their performances within that decade’s timeframe, so think of his time on the Hornets and his time on the Nuggets.

So now, who’s the average shooting guard from the 2010s?

It’s Gerald Green! He’s had quite the resurgence in Houston, and he’s much more relevant than he’s been for a while.

But, this centers around the later part of his career only. Considering the hype around him as a high schooler, it’s odd to think that his success didn’t translate until that athleticism that made him so exciting had worn off a little bit.

Don’t get me wrong, he’s still, at 32, one of the most athletic guys in the league, but when he first came into the NBA, he was one of the most insane athletes we’d ever seen, and for whatever reason, it just didn’t translate yet.

But after coming back from his exile to Russia and China, he’s carved out a role for himself with each team he’s played with – New Jersey, Indiana, Phoenix, Miami, Boston, and now Houston.

While I find it extremely interesting that it was so helpful for him to develop his skills particularly during his time with Lokomotiv Kuban after he fell out of the league in the first place, I find it much more interesting that he only has nine fingers because one got torn off during a dunk gone wrong when he was in sixth grade. There’s a way in which he’s not average!