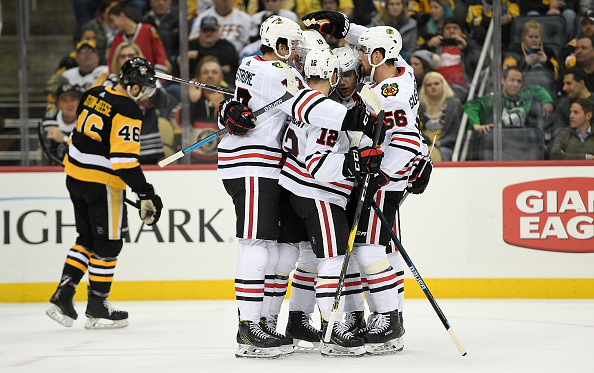 Pittsburgh Penguins won eight straight games going to Sunday night, but as soon as they learned Their opponent would be, the Penguins knew the streak would come to an end. The Blackhawks defeated the Penguins for tenth straight time and in comeback fashion. The Pens scored two early goals to jump to a 2-0 lead, but Chicago came back to win 5-3 to offer a little bit of consolation for fans from Windy City.

It might be a coincidence over other things, but this impotence of the Penguins to beat the Blackhawks seems to be a curse. What about their first head-to-head meeting earlier in November? The Blackhawks were on an 8-game losing skid and they defeated the Penguins 6-3 in Chicago. They were on an 11-game streak of not winning in regulation at that time. On Sunday night the Hawks ended an 8-game winning streak for the Penguins.

Last time the Penguins beat the Blackhawks was a 4-1 win in Pittsburgh on 31st of March 2014. The next three games offered overtime, and every time the Hawks prevailed, followed by seven wins in regulation in a row. Penguins fans weren’t even sad about losing the game on Sunday night, more than that they were curious about the reason for this losing streak against one team. Don’t forget that last year Chicago beat the Penguins 10-1.

Which teams have the longest active winning streaks in the NHL?

That is nothing new to current NHL, winning streaks in head-to-head matchups happen pretty often. The longest one is currently held by the Bruins, who have defeated the Arizona Coyotes for 14 straight games. The Bruins already finished their regular season series with the Coyotes, winning 2-1 in Glendale and 4-3 in Boston. Last time Arizona won a game against the B’s, it was played in Prague in Europe in October 2010.

The Bruins are facing a tough challenge this week, they will be hosting the Washington Capitals on Thursday night at TD Garden. The Capitals have defeated the Bruins for 13 straight games and they will try to level the Bruins record of 14 straight wins against one team. Boston has everything in its own hands later this week. But they will recall Opening night from October when they were crushed in Washington with a 7-0 loss.

The Red Wings lost 13 games in a row against the Tampa Bay Lightning, their divisional foes, as well. It seems like a mission impossible for Detroit to eventually defeat superb Tampa Bay, they will have their next shot on 9th of March at Amelie Arena in Florida. Besides those three active streaks featuring Boston, Washington, Tampa Bay, Detroit, and Arizona, in fourth place, we will find the Penguins struggles against Chicago on a 10-game losing streak.

Those losing fashions don’t endure through eternity. For example, the Coyotes, who already suffer lengthy losing skid against the Bruins, ended their 9-game losing streak against the Rangers in New York earlier this season when they came back from 0-3 deficit in MSG. On Sunday afternoon, Arizona beat the Rangers 5-0 in Glendale to sweep regular season series with the Blueshirts. The Yotes still face an 8-game losing streak against the Dallas Stars.

What is the reason for one team losing so many games in a row against another team for such a long period of time? We will probably not get an appropriate answer for that. You would understand why the Bruins haven’t lost a game against Arizona for nine years, but why the Blackhawks keep beating Pittsburgh or why Boston doesn’t seem to find a way to defeat the Capitals, that remains a mystery.

One loss at a time is sometimes very difficult to explain, even when the players try really hard. When one team lose five straight games against another one, that might be just a huge compilation of coincidences. Let’s say that two of those games were played on back-to-back nights, in two other games the losing team had significant and very unfortunate injuries or absences, then you would partly understand it. But how to lose 10 or even 14 games in a row against one team in the modern NHL and in a salary cap era, that’s more than tough to describe and it’s nearly impossible to offer a reasonable explanation.