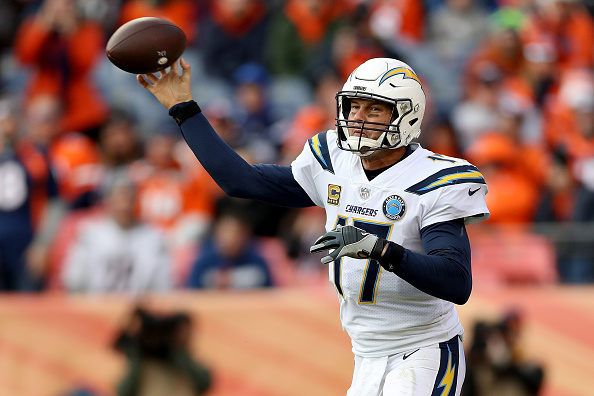 The Chargers take on the Ravens today at 1:00pm ET. Since the Colts won yesterday evening, the winner of this game will travel to New England to face the Patriots next Sunday.

Hunter Henry was seen practicing and was optimistic that he would play against the Ravens, but Chargers head coach Anthony Lynn said Henry would not play in the wild-card game. However, he did not rule out Henry for other playoff games going forward. So, if the Chargers can defeat the Ravens, they will get their tight end back just in time for the Divisional round.

The Chargers committed too many penalties, 8 for 69 yards, in their previous meeting with the Ravens and they were one possession away from winning the game until Antonio Gates fumbled the football. That was the worst performance by the Chargers this season, and yet they almost won the game. If they commit fewer penalties, that alone should help them immensely. Los Angeles also became one-dimensional as Rivers threw the ball 37 times while the Chargers only ran it 16. The Ravens took advantage of the Chargers’ poor pass protection, hence why the Chargers should use Virgil Green as a blocker.

Lamar Jackson led the Ravens to a big win in LA. He is 7-1 ever since taking over the starting QB job. In week 16, Jackson had 13 rush attempts for 39 yards and threw for 204 yards, 1 TD, 0 INT. Gus Edwards had a solid game too with 14 rushes for 92 yards. Averaging 6.5 yards per carry. The Chargers defense needs to stop Edwards in order to win today. The Ravens defense had a stellar performance against Philip Rivers and the Chargers offense, forcing Rivers to throw for just 181 yards and 2 interceptions. Melvin Gordon was held to just 41 rushing yards, and Keenan Allen was held to just 58 receiving yards. So, the Ravens had the Chargers’ number in week 16. But, the playoffs are a different type of environment.

Baltimore was able to run the ball effectively vs the Chargers in week 16. Aside from Jackson and Edwards, Kenneth Dixon chipped in with 8 carries for 28 yards on the ground. Lamar Jackson also spread the ball around. Although he only completed 12 passes, they were to 8 different receivers.

The Ravens defense was outstanding week 16 like they have been all season long, as I mentioned earlier, but, Philip Rivers’ protection was awful getting sacked 4 times. Virgil Green hasn’t been a big part of the passing game; they should use Green as an extra blocker to protect Philip Rivers. If Rivers gets a few more seconds to throw the ball, they will win. They need to run the ball effectively to avoid 3rd and longs. I think the Chargers defense will make adjustments and they will be able to hold their ground. They need to make Lamar Jackson beat them by throwing the ball. If they can stop the run game early, Jackson will eventually need to throw the ball. That is where the Chargers should be able to capitalize. This will be a close game until the very end. I believe in Philip Rivers, and I think the Chargers win this game 28-24.